You are here: Home / Travel / Things to Do in Asheville, NC: A Foodie’s Guide

Last week, I went on a 4-day trip to Asheville, NC, and couldn’t wait to share about it with you all! For those who aren’t familiar, Asheville is a mountain city in NC with a fun vibe, lots of trails, an abundance of healthy restaurants, tons of breweries, and more.

It’s about 4 hours from where I live in Raleigh, and I spent four nights there. I took the day off from work on Friday and left early afternoon, arriving at the AirBnB around dinnertime. I met up with my cousin, Sarah, who lives in GA. It was almost perfectly halfway between us!

We ate lots of good food. I’ll split it up into regular meals and desserts, since there were quite a few of both. If you’re planning to visit Asheville soon or go in the future, this may give you some ideas for where to go while you’re there!

I feel like I should note that while I’m typically a big saver and I’m really frugal with money (I pack my lunch instead of buying it, I shop around for the best deals on everything, etc.), I’ll spend money a bit more freely on vacation since it’s a once-in-a-while thing.

My favorite spot was Green Sage Cafe, where I actually went twice for lunch at the downtown location (there are 3 locations around Asheville!). The first visit was pretty crowded, so my cousin and I ordered our food to go and walked to a park across the street and enjoyed our food in the shade. 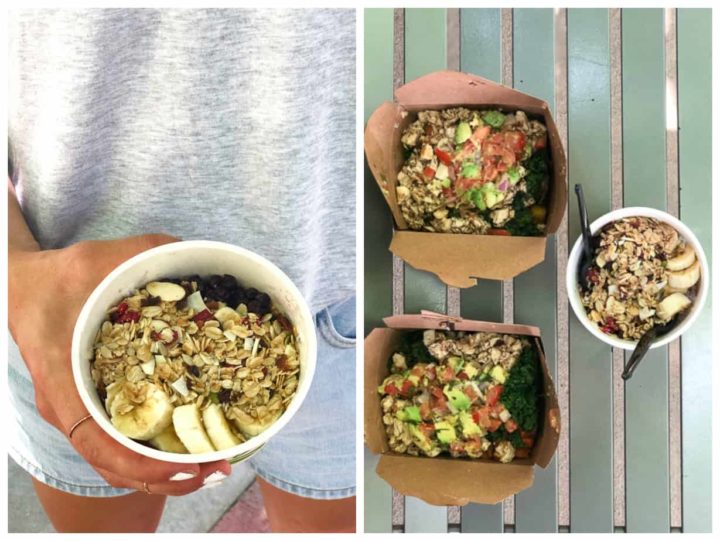 I tried chia pudding for the first time ever there and loved it! We shared the chia seed pudding (titled the “Huckleberry Bowl” on the menu) and each got our own Reggae Bowl with jerk chicken, roasted root veggies, black beans, rice, kale, onions, and avocado salsa.

On my second visit there, I ordered the chia seed pudding again and also got the Pura Vida Bowl with eggs, kale, root veggies, rice, and black beans. The food was SO good both times! 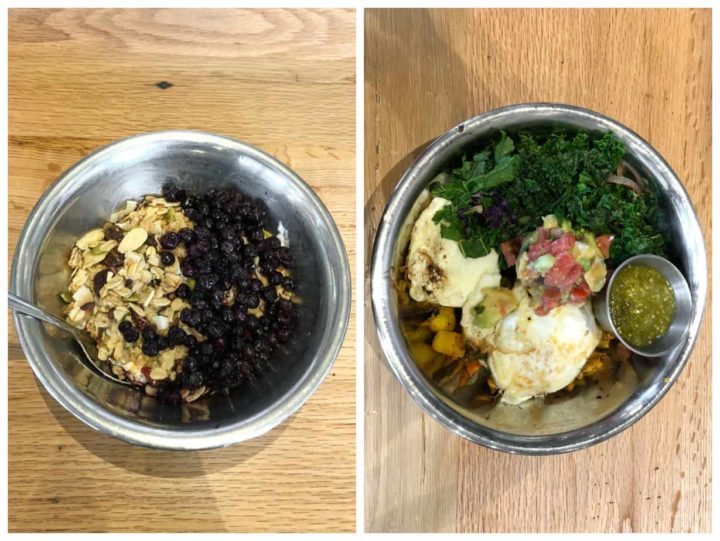 We came to Rosetta’s Kitchen for one reason: to try their flight of kombucha! Since Asheville’s known for its breweries and neither one of us are big beer drinkers, this was the perfect thing for us. The entire flight was just $7 and we split it two ways, so it was surprisingly inexpensive. 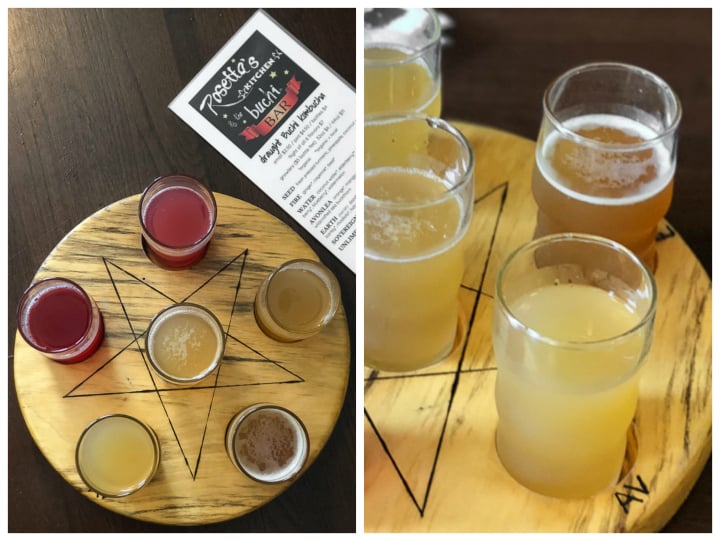 We tasted six different flavors of kombucha and ranked our favorites. Some of the flavors are funky, and I generally didn’t like those as much, so it was fun to try just a few sips. Fire (my least favorite) has ginger, cayenne, and beet, while Earth (my second-least favorite) has dandelion root, burdcok, chicory, barley, rhodiola, holy basil, stingning nettle, and maple syrup. I liked the simple, more fruity ones.

White Duck Taco Shop has multiple locations around Asheville, including downtown and the River Arts District, and we picked the downtown one. It’s right near this “Before I die, I want to…” wall, so I had to fill it out. I wrote, “run in all 50 states.” 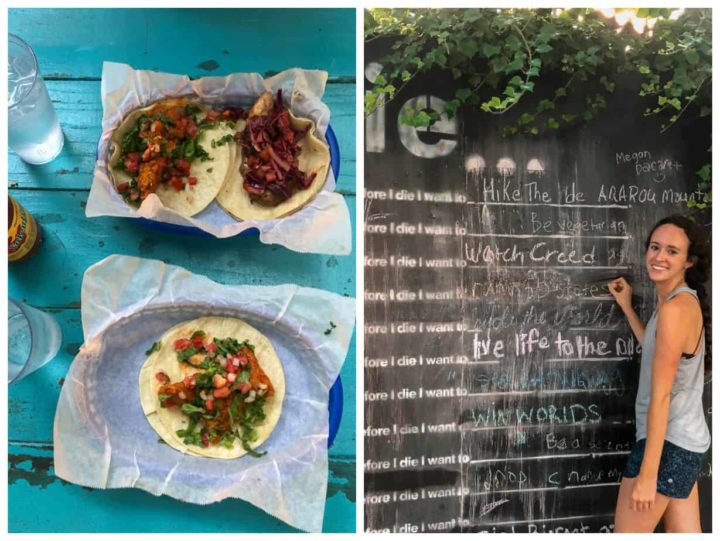 The food was good! The taco combinations are creative, and it’s pretty inexpensive, with a good vibe. Neither one of us realized the buffalo taco had fried chicken and that wasn’t our favorite, but I’d go back to order something else!

People seem to love Bimberibon! It’s pretty new, and it was packed. I got the Tandoori Chicken Bowl, which was just alright, but I’d probably go back to try something else. 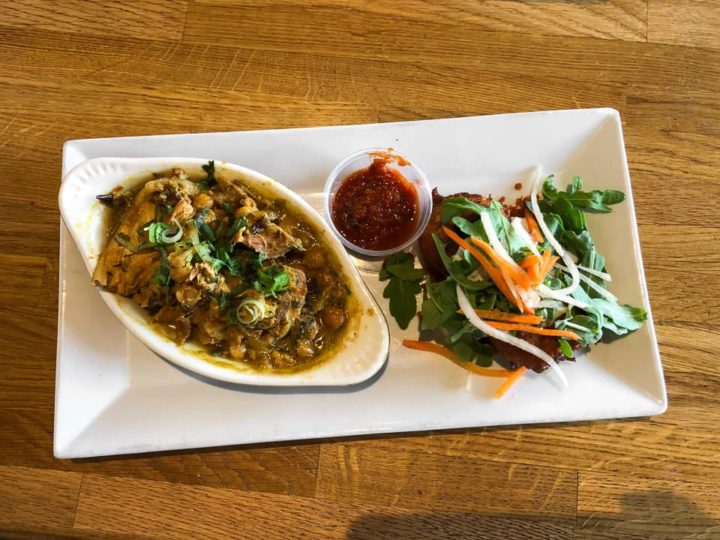 Oh, and we did pack some snacks and some breakfast food. I brought baked oatmeal and yogurt to have breakfast at the AirBnb when we wanted to, energy bites, fruit, popcorn, crackers, and veggies & hummus. We also stopped by the grocery store once to pick up deli meat to pack up, along with our snacks, for a picnic!

This ice cream sandwich shop downtown is amazing! Sunshine Sammie’s has a ton of vegan options (helpful since Sarah is dairy-free!) and you can mix-and-match different cookies to customize your own ice cream sandwich. I got one vegan flourless peanut butter cookie and one graham cookie and filled it with cookie dough ice cream. 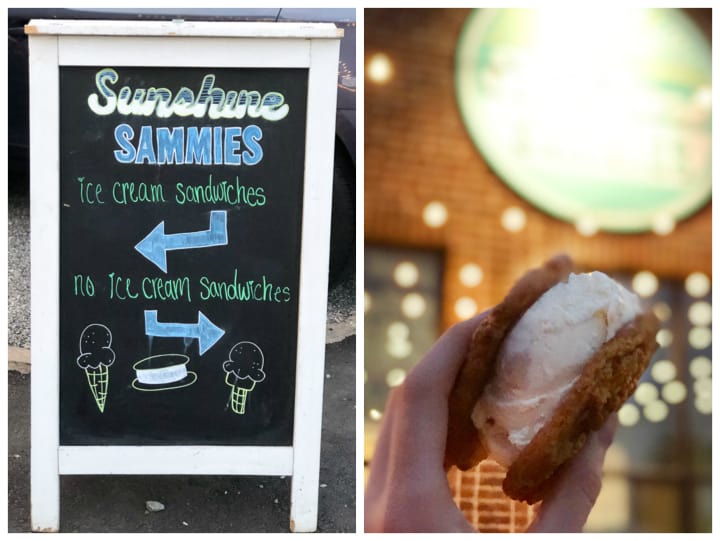 Sarah got two different vegan cookies plus a vegan chocolate sorbet. Those things are BIG and not ideal for sharing (it’d be super messy), so it’s a good place to go when you’re hungry! We agreed we could’ve gotten just those for dinner and skipped tacos beforehand 😉 . 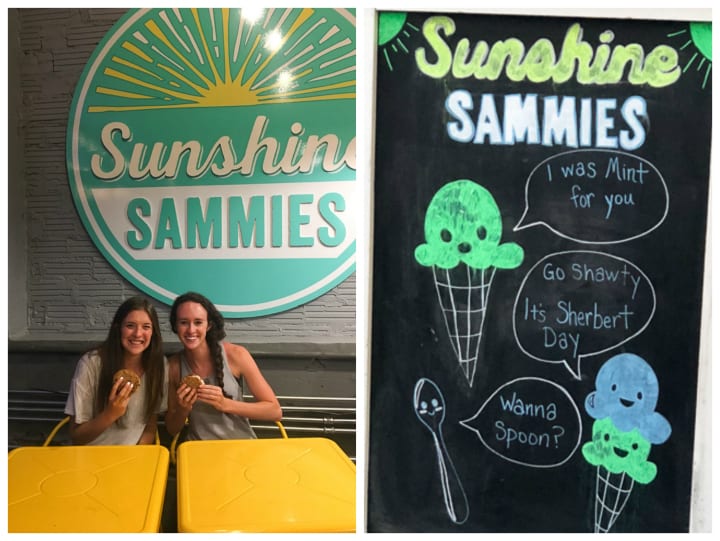 I loved that Ultimate Ice Cream Co. uses milk from local cows, and the ice cream itself was incredible. I got mint chocolate chip and chocolate chip cookie dough, but didn’t realize they’d look so similar! 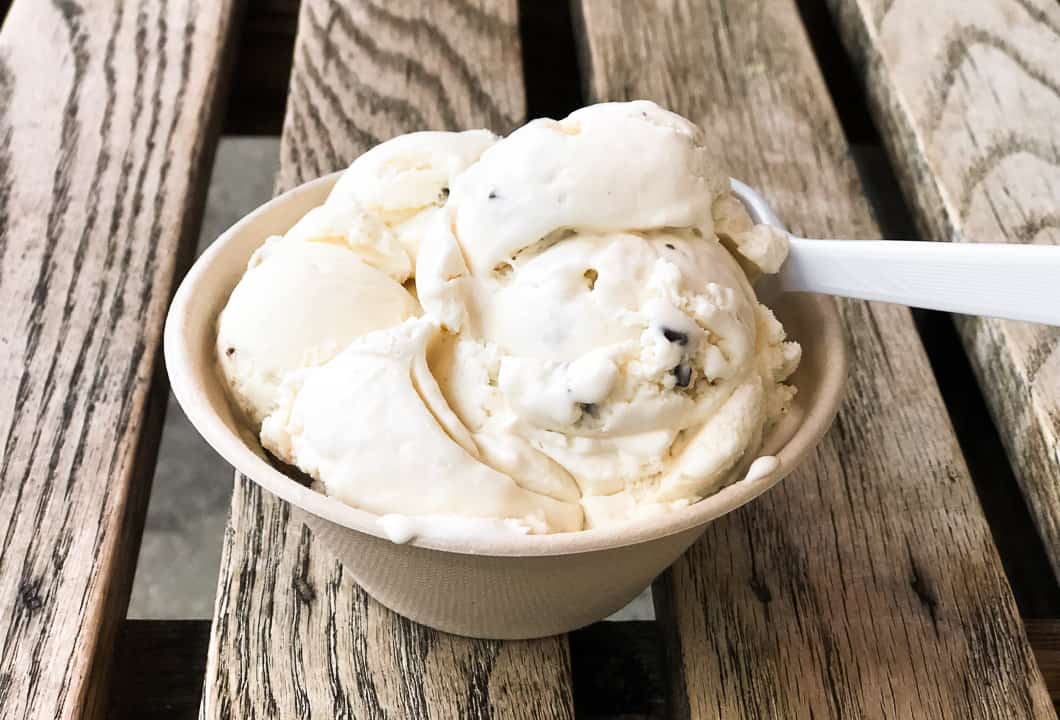 It wasn’t clear on the website, but when I went, they did have several dairy-free options, too. I’d definitely go back…tonight.

The final ice cream place we went was The Hop and I got cookies ‘n’ cream. It was my least favorite of the three, but it was still good, and I’d do back just to try a different flavor! 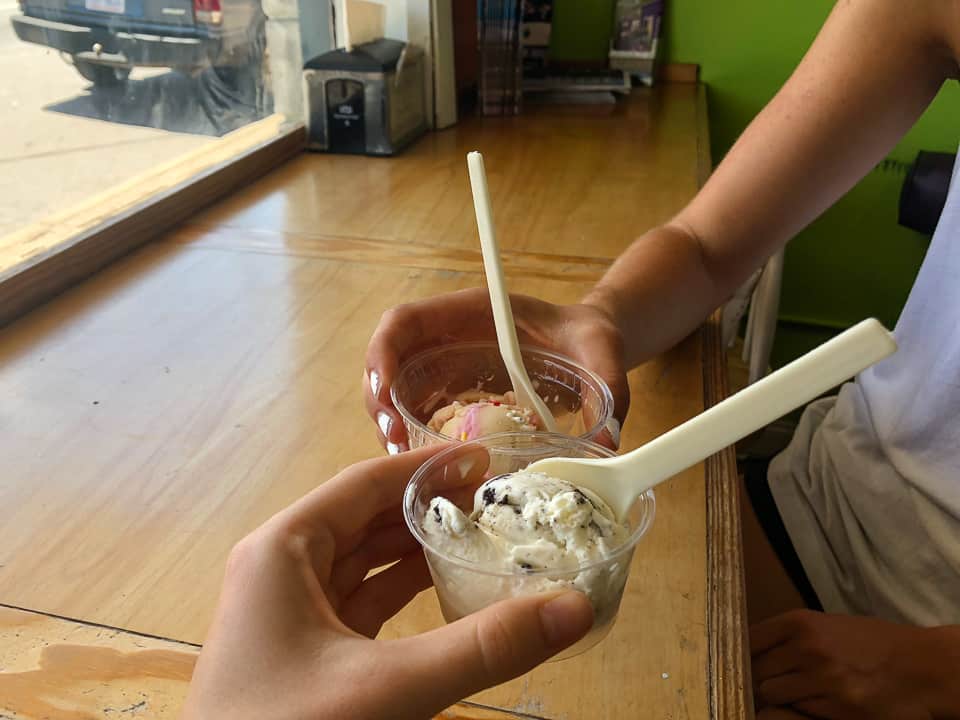 THINGS TO DO IN ASHEVILLE

There’s a cool mural in the River Arts District (not too far from downtown) where we had to stop for a few pictures. There’s not much to do at the area otherwise, but it’s a fun photo op! And when you look up “River Arts District” as a location on Instagram, it’s mostly people in front of this mural. 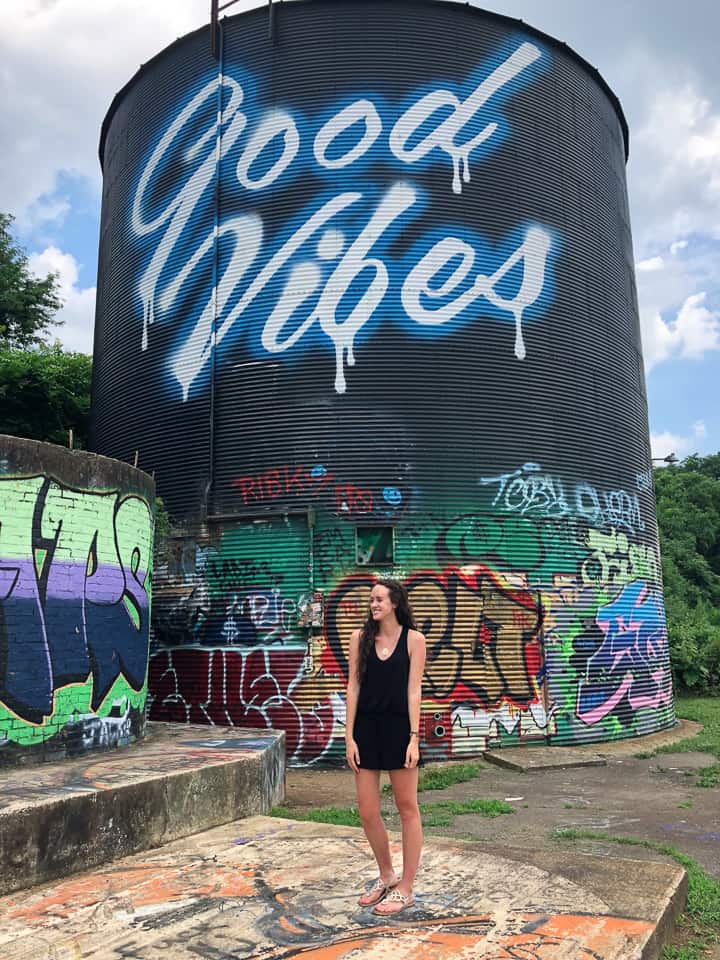 This ended up being a hidden gem of a find! I happened to spot the sign for this lake since it was less than a 10 minute drive from our AIrBnb. It wasn’t busy at all, and it was just $2 per person to enter the park area. I just wanted a spot to read, Eno, or float in the water for a bit, and it was perfect for that.

There’s a pretty mild 1.5 mile hike up to the waterfall and another 1.5 mile back down, and it was pretty! We packed food for a picnic at the waterfall and enjoyed seeing it. The base of the waterfall isn’t really big enough to swim, so we headed out after that. Next time, I’d look for a waterfall with a bigger swimming area! 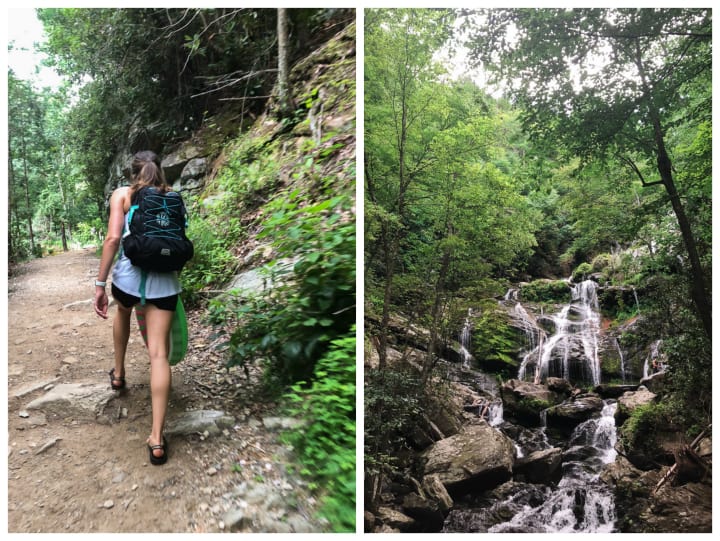 This one isn’t technically in Asheville, either, but it’s definitely worth a mention. It was an hour and a half for us coming from downtown Asheville, and about half of the drive is through gravel roads in Pisgah National Forest. 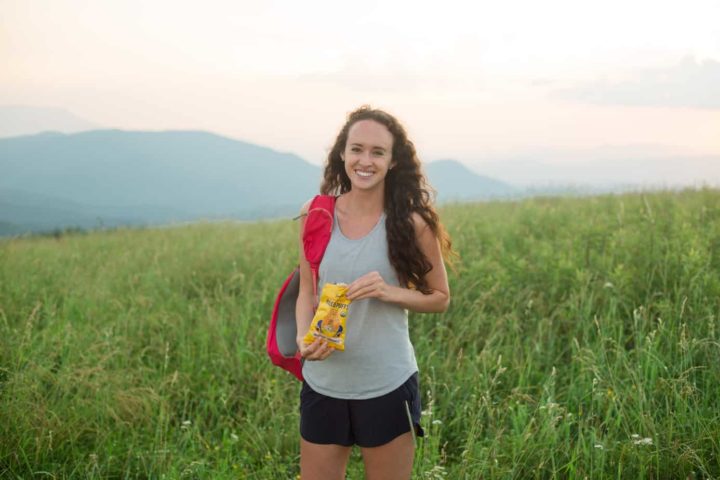 When you get there, you hike about 1.5 miles up to this grassy field with a gorgeous overlook and you can see for miles. Some people pitch tents and camp up there! We watched the sunset here, and it was amazing.

I didn’t take a photo here, but you can probably imagine what the outlet mall looks like! We just stopped by the J. Crew and West Elm outlets, although there was also a Gap, Loft, and a bunch more stores we would’ve visited if we’d had time!

So, that’s what we did in Asheville! Feel free to let me know if you have any questions, or chime in with your Asheville recommendations! And feel free follow along with future trips via my Instagram stories @livbane!