These peanut butter chickpea blondies are gooey, delicious, and made with no refined sugar. They’re nutritious enough to enjoy as a mid-afternoon snack and rich enough for an after-dinner dessert! And these healthy peanut butter blondies happen to be flourless, naturally gluten-free, and vegan, too. 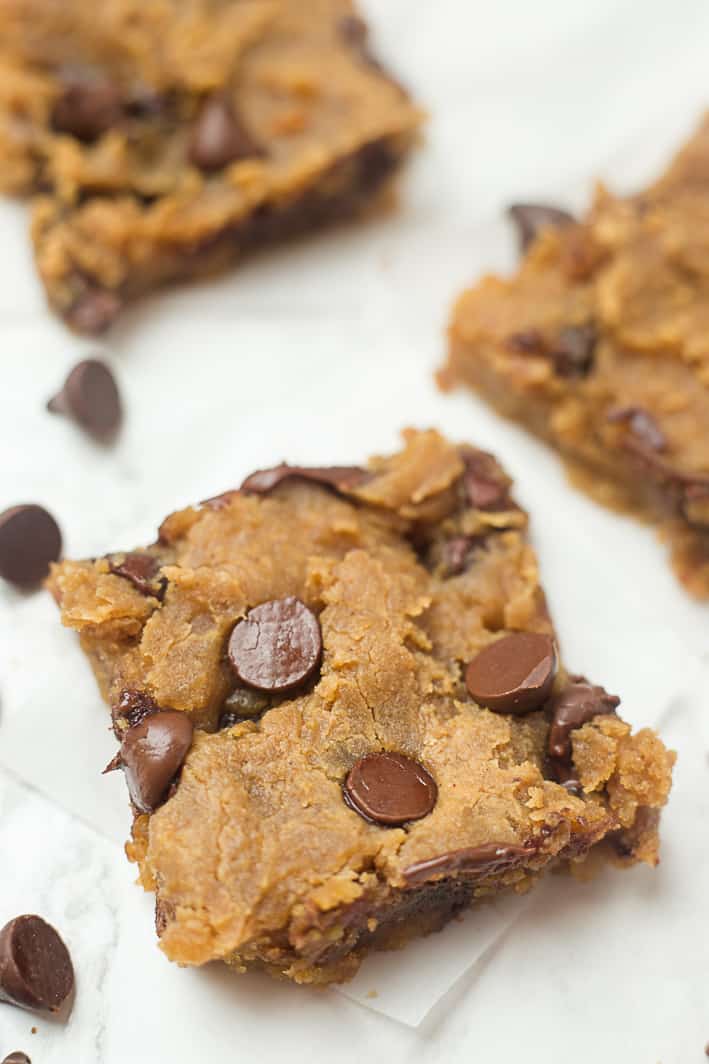 A couple of months ago, I joined my friend, Riley, for a mini staycation while she was housesitting for a family friend. We played with their dogs, went for a long run on the American Tobacco Trail nearby, taste-tested the 3 kinds of mint chocolate chip ice cream in their freezer (they were happy to share their food!), shopped at the outlet mall, and had a fun staycation.

Riley brought these peanut butter chickpea blondies to share and they were soo good. Like usual, I was a bit skeptical of any dessert that’s “healthy,” but I liked these enough to make them myself several more times, and I’ll keep making them in the future! 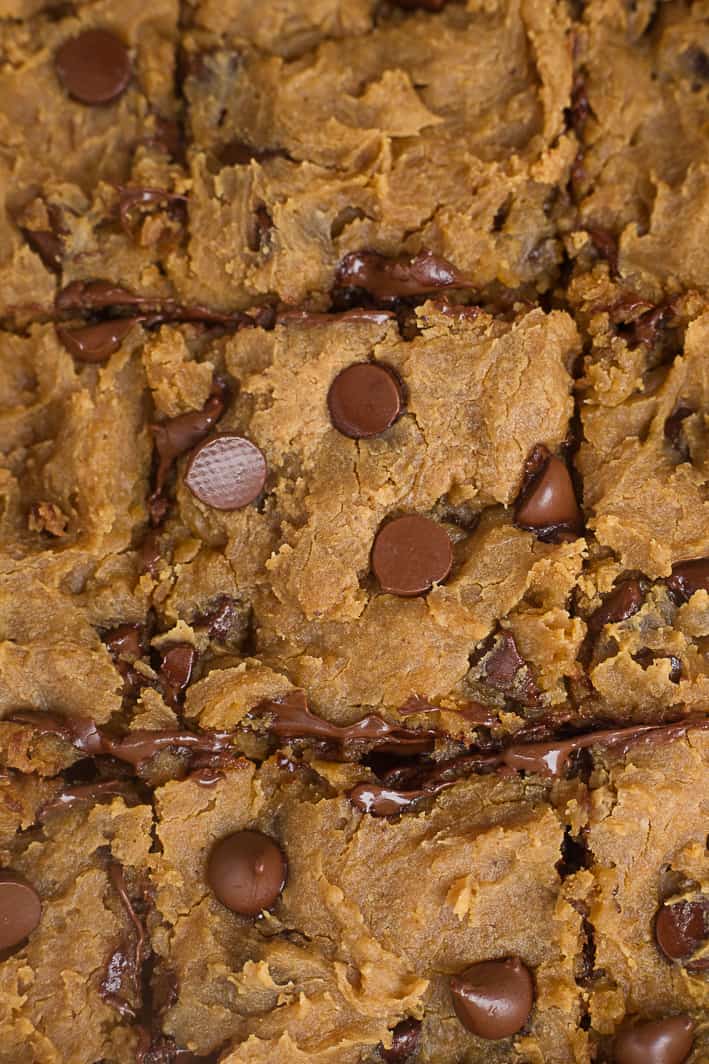 These peanut butter blondies do have chickpeas in them, but they don’t have a strong chickpea taste, fortunately. The ingredients (chickpeas, peanut butter, maple syrup) magically turn into a soft, gooey blondie.

It’s just a bonus that these flourless blondies have nutrients like fiber, protein, and healthy fat from the peanut butter.

I don’t think dessert need to be healthy– I eat ice cream a few times per week just because I love it! But I’m always up for trying a healthier dessert as long as it doesn’t have crazy expensive ingredients and it tastes good. (I’d honestly rather just eat fruit rather than eat a healthy dessert that tastes bad.)

They’re good both hot out of the oven and later at room temperature or refrigerated. They don’t taste exactly like traditional blondies and are a bit softer, but I think they’re great for a healthy treat. 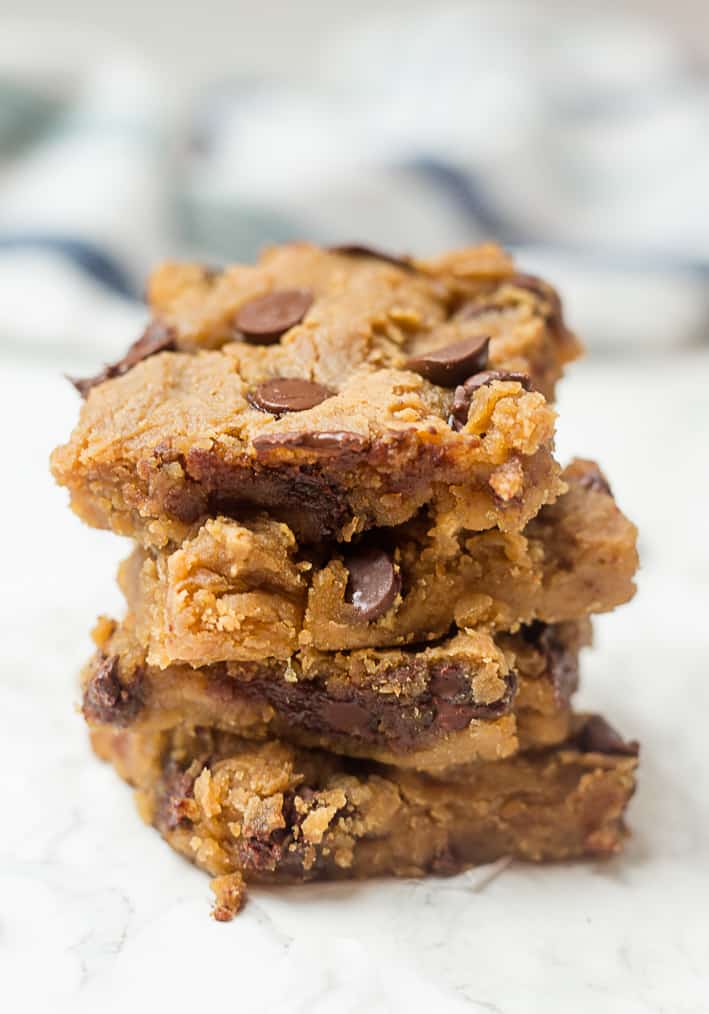 You can make the blondie batter in either a food processor or a somewhat powerful blender. I actually made these twice to test how powerful the blender needs to be. The first time was in my family’s Vitamix blender, and that definitely did the job.

The second time was with the much less expensive (but still pretty good) blender in my dorm room. I had to stop the less powerful blender to stir a few times, but it ended up doing the job. You definitely want the blondie batter to be smooth and mixed well! 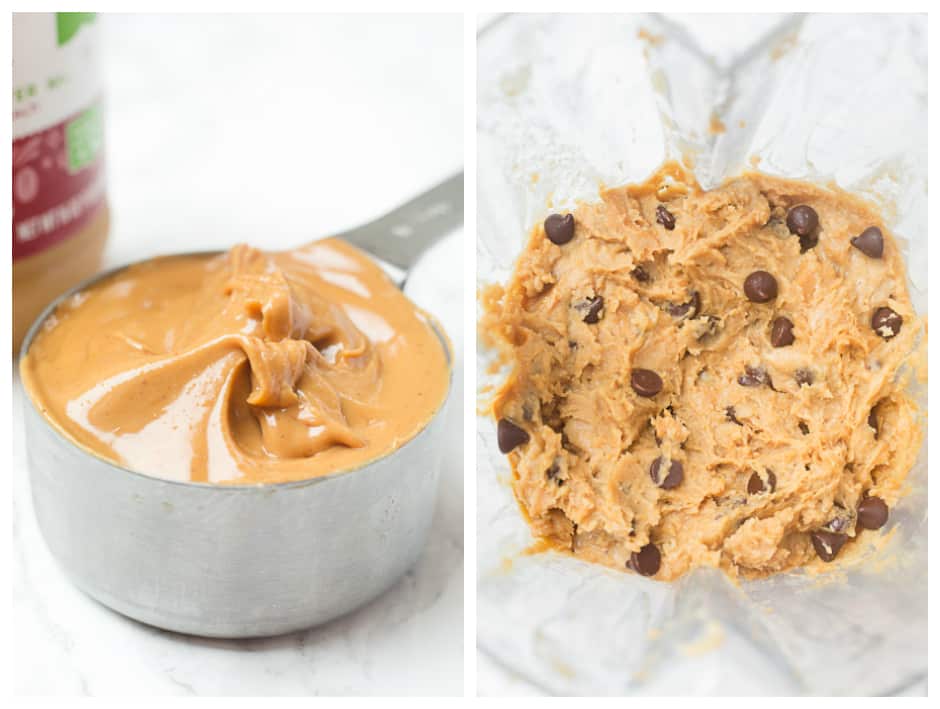 Since I love to bake and find it really relaxing, I’m always looking for new recipes to try, and it’s nice to have some healthier treat recipes in my arsenal.

Most weeks, I make some kind of healthy baked good/snack like baked oatmeal or energy bites, in addition to making one or two main dish recipes for dinner.

You can read more about how I loosely meal prep here, if you’re interested! I’ll be adding these peanut butter chickpeas to the rotation. 🙂 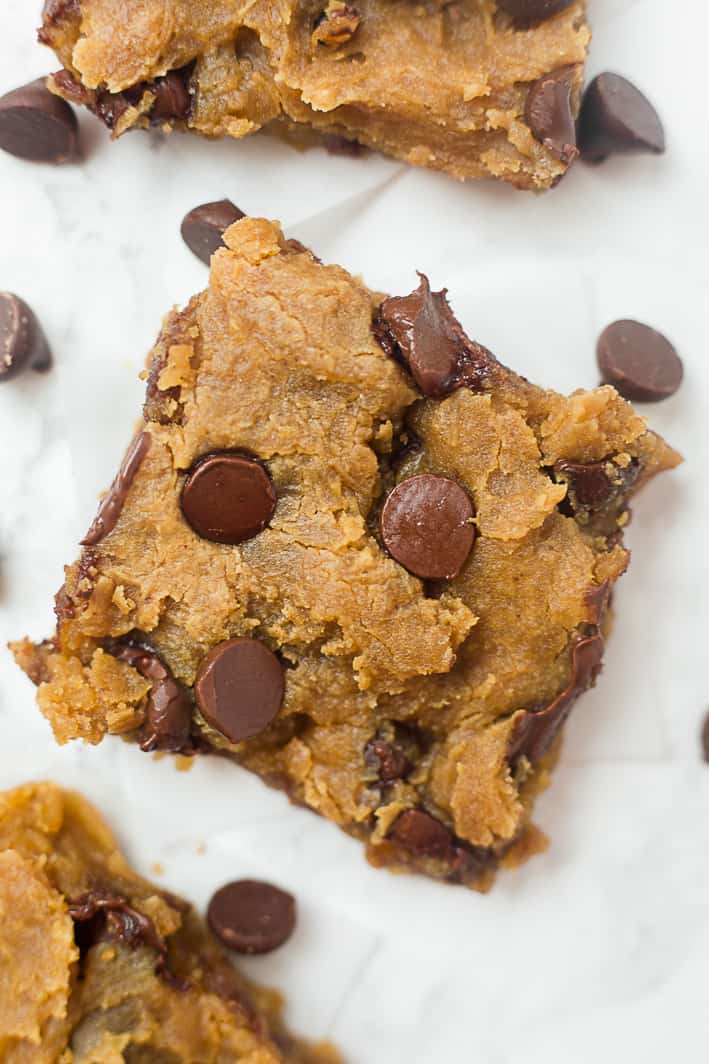 If you try these healthy peanut butter chickpea blondies, let me know in a comment or take a photo and tag me @livbane on Instagram! 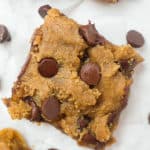 Although I think typical cookies and blondies taste great when they're super gooey, I personally find that you can taste the chickpeas in these blondies if they are not baked long enough. So, slightly under-baked, but not too gooey, is ideal.

Source: My friend’s recipe was originally from Ambitious Kitchen, and we tweaked it slightly to add more peanut butter and chocolate (and slightly lessen the amount of maple syrup and salt), although I’ve seen chickpea blondies recipes floating around for years, so there are quite a few similar ones out there (ex: here, here).