I’ve posted before on my Instagram stories about my Costco grocery hauls, and I wanted to write a more comprehensive blog post about the healthy and organic items I like to buy at Costco!

I don’t have a blog partnership with Costco, and this post is solely based on my personal experience shopping there. My mom has shopped at Costco for years, which is how I learned that it’s a great place to stock up on healthy and organic items for low prices. 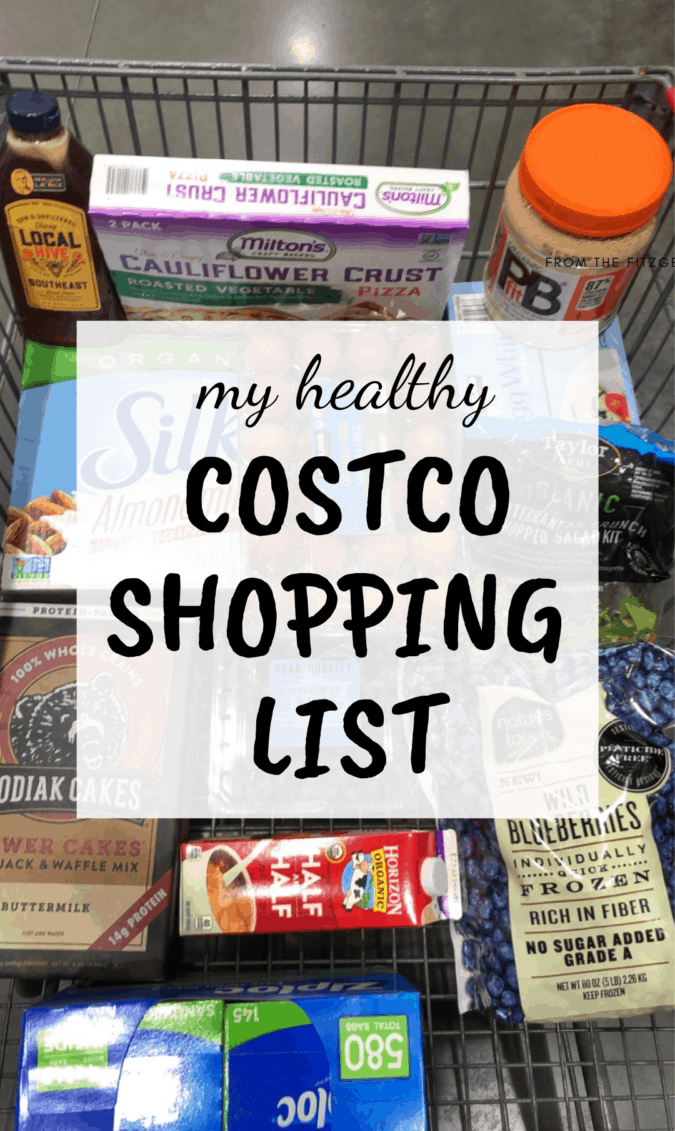 I shop at Costco about once per month and stock up on lots of pantry staples, as well as fresh produce. Those pantry staples often last me well over a month, so I don’t have to buy each of these items on every trip. I typically spend roughly 1/3 of my loose monthly grocery budget at Costco.

Between Costco trips, I shop at Harris Teeter, Whole Foods, and Trader Joe’s for my weekly produce, as well as items that Costco doesn’t carry or items that aren’t a great deal there.

Costco is often busy, so I go in with a detailed list and shop as efficiently as I can. I also often go early in the morning when it opens so it’s less busy!

Nuts – Costco’s prices on big bags of raw almonds, walnuts, and pecans are hard to beat. I actually don’t usually enjoy snacking on nuts, but I use them often for baking in recipes like coconut oil granola or apple crisp. 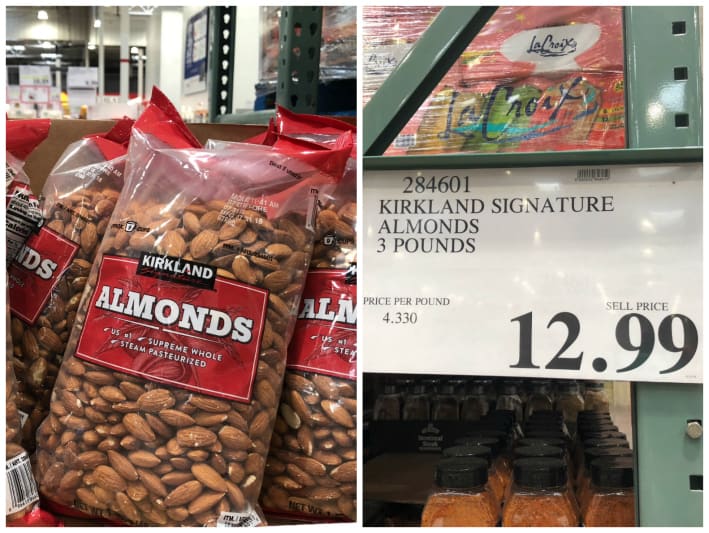 Plus, you can freeze nuts to extend their shelf life!

Coconut Oil – Costco has the best deal I’ve ever seen for coconut oil, and this giant tub stays good for a long time. 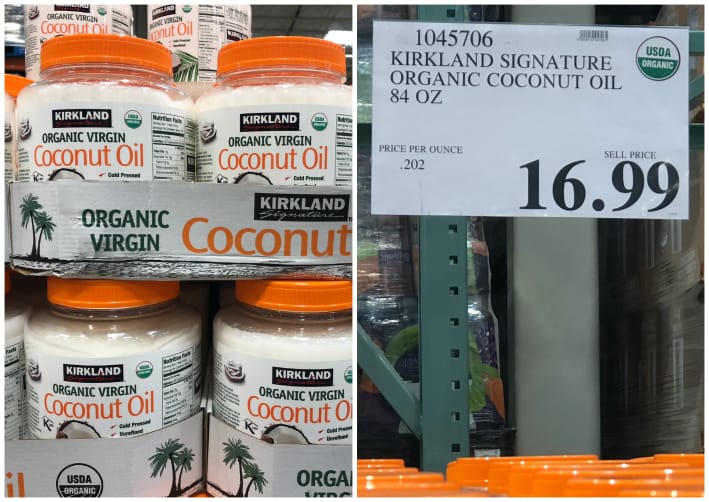 This is the best price I’ve seen for RX Bars, and these are two of my favorite flavors. 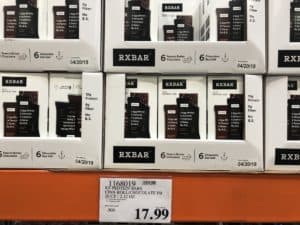 I like that these bars are have 12g of protein and made with simple ingredients (although they’re a bit high in natural sugar, like all fruit/date bars). 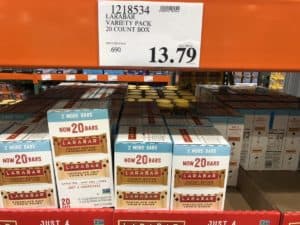 I often keep a bar in my purse or backpack for an emergency snack during a long school day or day of errands. I love the simple ingredient list, and they’re delicious! Larabars are also a bit high in sugar and lower in protein, so while I do really enjoy them them, I don’t eat them all of the time.

Raw Honey – High-quality honey can be EXPENSIVE, but this this raw honey is a great deal. I use this for everything, including my favorite peanut butter energy bites and baked oatmeal. 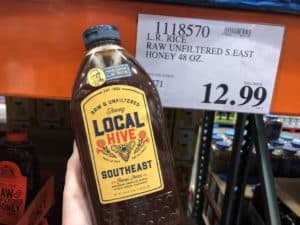 Organic Maple Syrup – I use pure maple syrup mainly as a natural baking sweetener, like in this apple crisp, these brownies, and these peanut butter chickpea blondies. 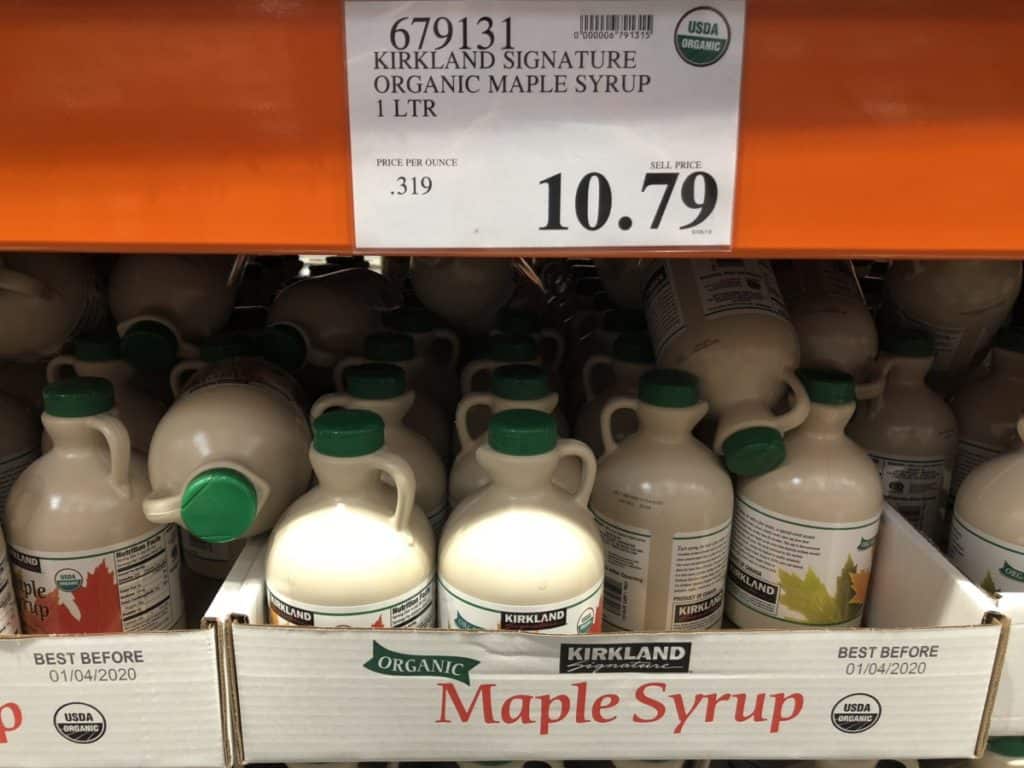 An entire liter of pure organic maple syrup is under $11 at my Costco!

PBFit Organic Powdered PB– I add powdered peanut butter to my oatmeal or pancakes every morning for a protein and flavor boost, and it still takes me a couple of months to make it through this giant container! 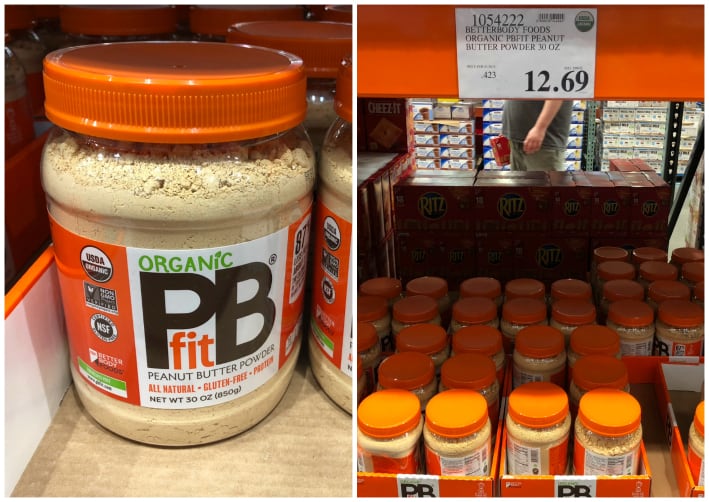 Powdered peanut butter is pretty pricy at the other stores where I shop, so it’s significantly cheaper for me to buy at Costco or on Amazon. 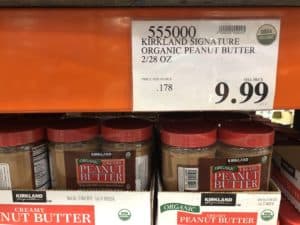 Kirkland Almond Butter – This almond butter is also a great deal, although it’s not “raw” or organic almond butter, which is what I would prefer buying. Organic AND raw almond butter is hard to find and costs an arm and a leg, so this works, too! 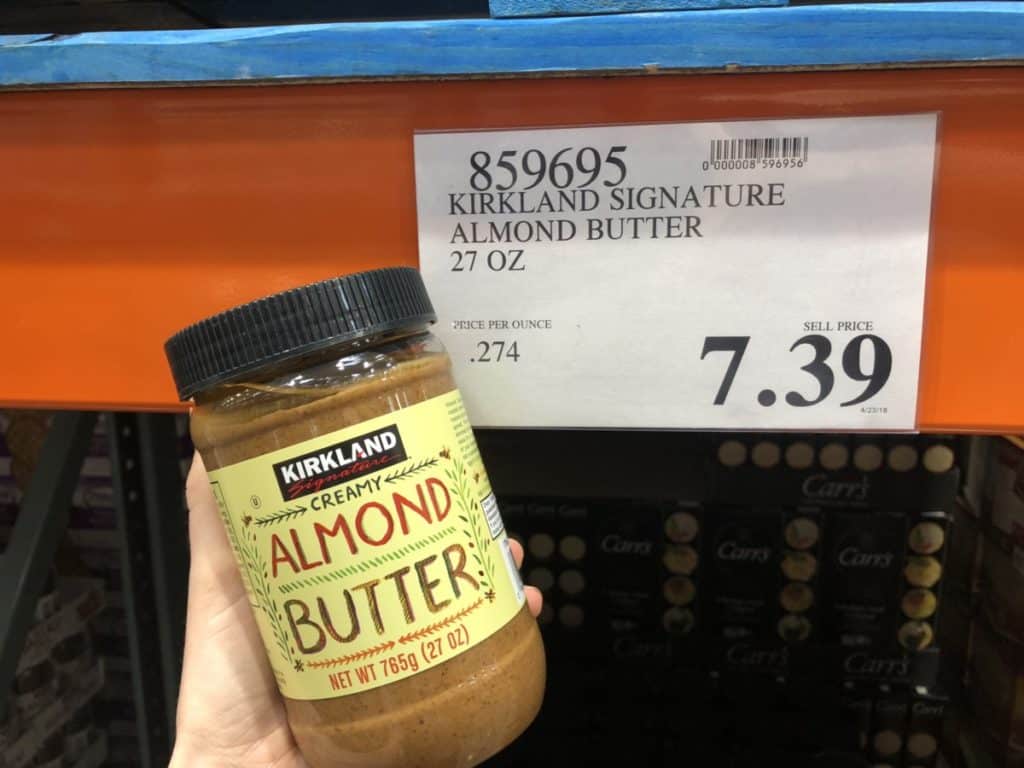 4.5 Pounds Organic Quinoa – This is a steal, considering I’ve paid $5 for just one pound of organic quinoa at other stores!

Kirkland Organic Salsa – I love this salsa and use it most days on my omelets and with a lot my favorite Mexican recipes. Each jar is under $4 for 38 ounces of organic salsa! 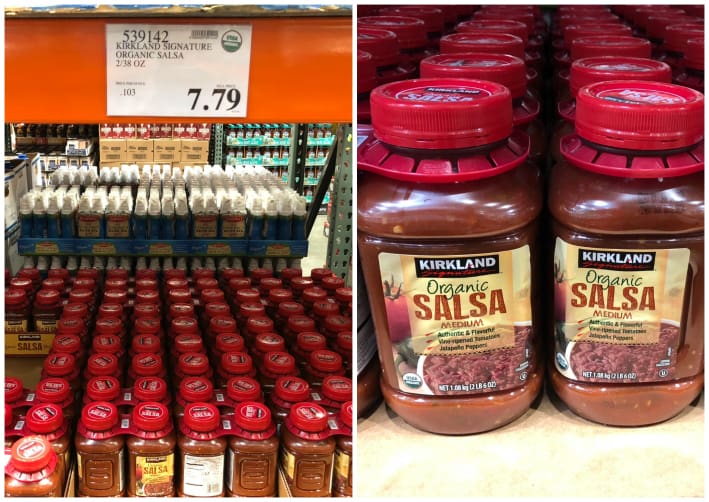 Organic Dried Figs – I love these for a healthy dessert, and this big bag stays good in the fridge for a long time. 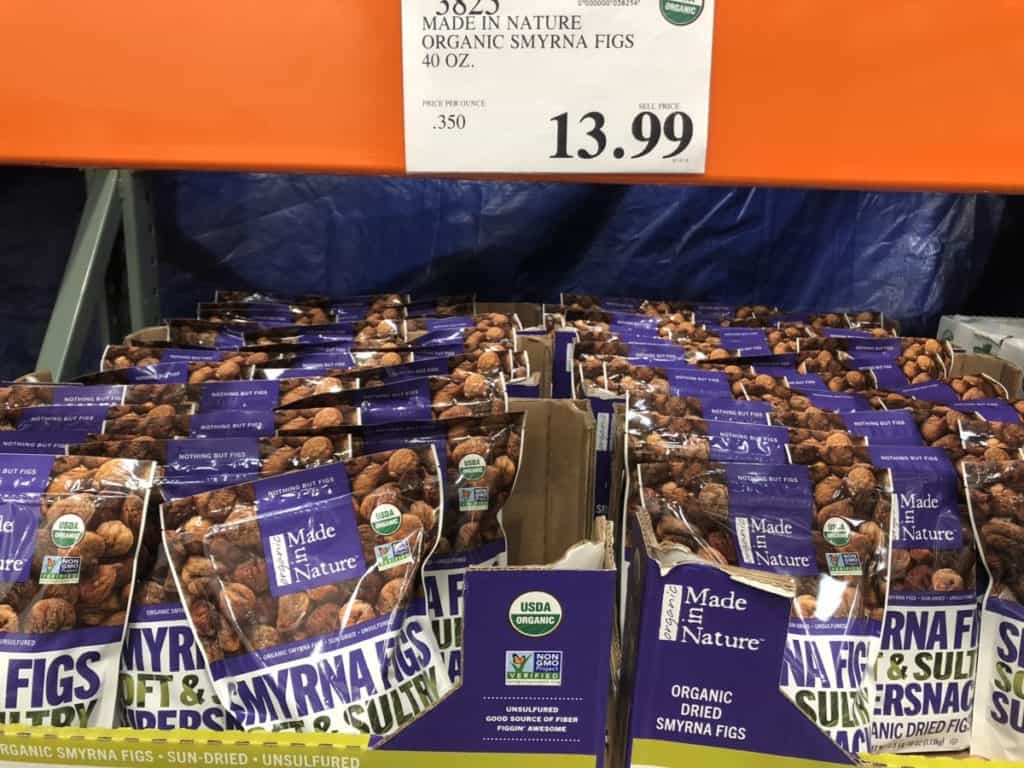 Almond Flour – I didn’t snap a picture of this one, but Costco sells big bags of almond flour for the best price I’ve seen! It’s perfect for almond flour banana bread and my favorite apple crisp.

Grain-Free Granola – This isn’t necessarily the cheapest item, but I appreciate how much Costco has branched out in the healthy products it carries, including grain-free and Paleo options. 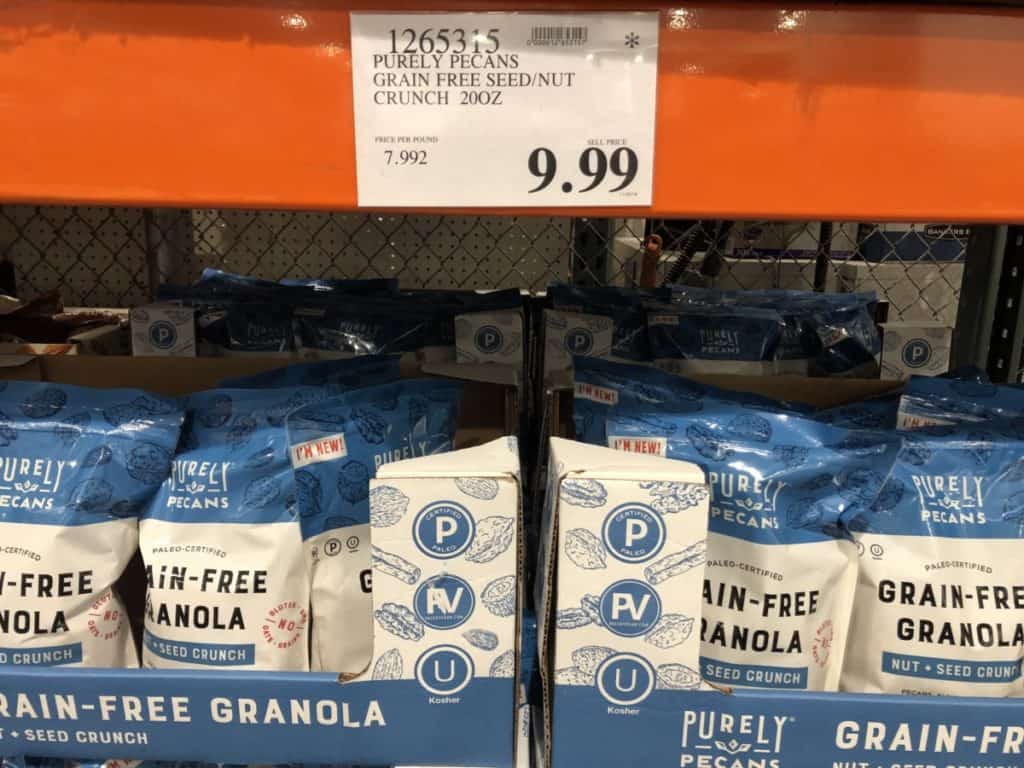 Kodiak Protein Pancake Mix – I tried Kodiak Cakes for the first time during my last Costco trip because they were giving out samples and the mix was on sale, and I’ve really enjoyed them!

Organic Coffee – My sister and brother-in-law always buy their organic coffee beans at Costco and then grind them there, although I haven’t tried that yet. 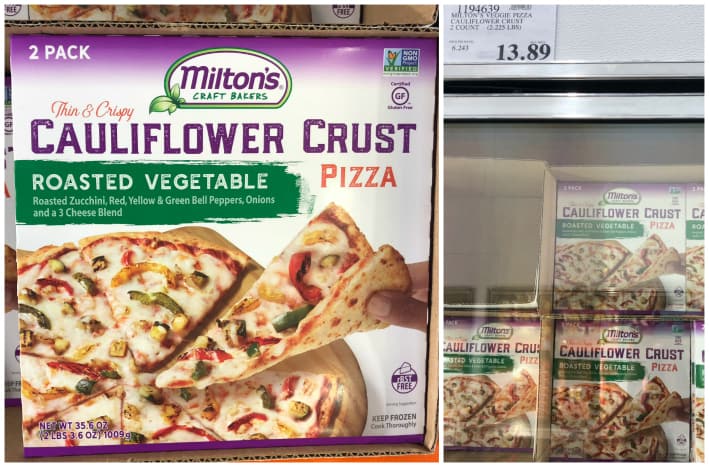 I don’t eat these pizzas all of the time, but I love them for a special treat and break from cooking. I had a friend over for cauliflower crust pizza and ice cream last night and she agreed– it’s the best! 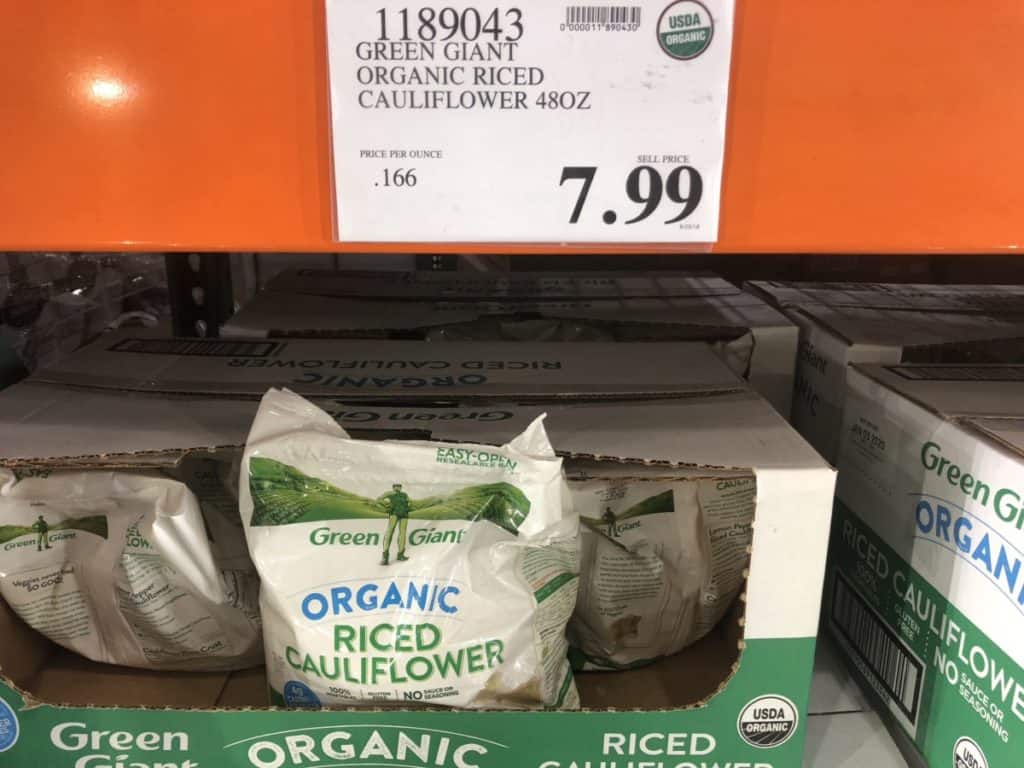 I also use cauliflower rice in smoothies, where you can’t taste it at all, and it’s a great natural smoothie thickener. 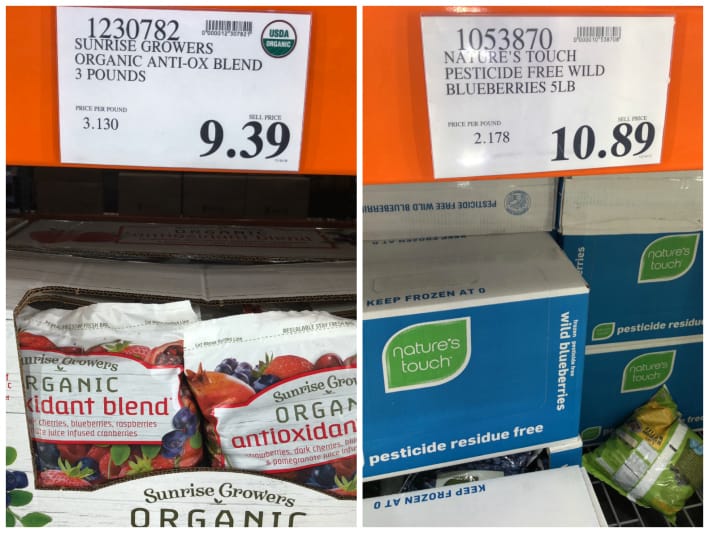 It’s hard to buy frozen berries anywhere else after getting used to Costco’s prices for organic or pesticide-free frozen berries!

Yasso Frozen Greek Yogurt Bars – Costco just started carrying Yasso bars! Those are my FAVORITE healthy sweet treat and I almost always have a box in my freezer. 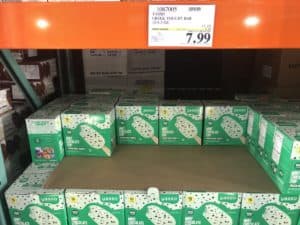 Each box has 15 mint chocolate chip bars, which sounds like a lot, but they don’t take up too much freezer space once you take them out of the box, and they disappear in a flash.

Other Refrigerated Items at Costco

Organic, pasture-raised eggs and cage-free egg whites – Update November 2019: My Costco just started carrying pasture-raised, organic eggs!! (Photo below is back when they were only organic). I make scrambled eggs or omelets with these almost every day day. 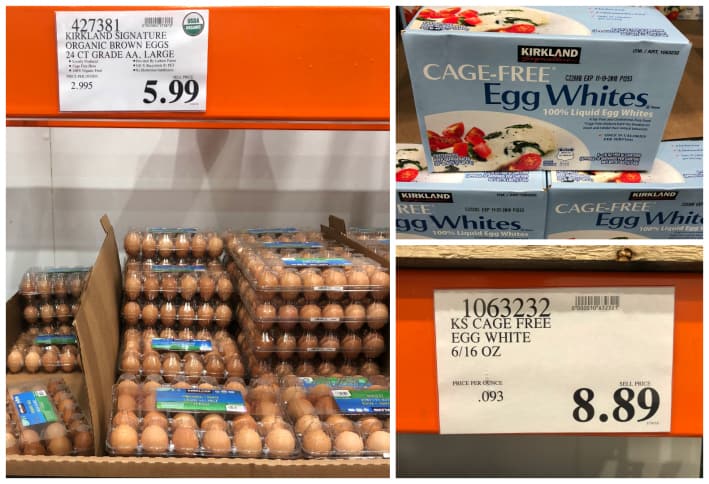 I also often also add egg whites to my morning oatmeal for extra protein. I sometimes buy Costco’s cage-free egg whites (although “cage-free” isn’t saying a whole lot, unfortunately), so I go back and forth on buying them.

Silk Organic Almond Milk – This comes in a 3-pack for around $9 in the eggs/dairy section!

Horizon Organic Half ’n’ Half – If you’re a coffee drinker, it’s hard to beat the price of $3 for a quart of organic half ‘n’ half. I’ve found that I can’t use an entire quart on my own before it goes bad, but for a household of 2+ coffee drinkers, it’d be a steal. 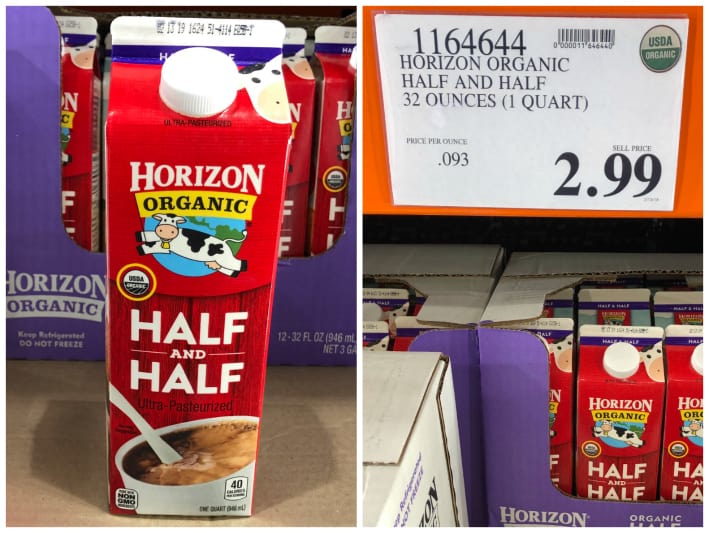 Organic Salad Kits– I love the giant organic chopped salad kits at Costco because they make it so easy to get in a ton of veggies with no prep work. My favorite is the Mediterranean chopped salad kit.

GT’s Gingerade Kombucha – GT’s is my favorite kombucha brand, and each bottle in the six-pack ends up being around $2.40, which is a great deal! The only bummer about Costco’s GT’s kombucha is that it’s all the same flavor. 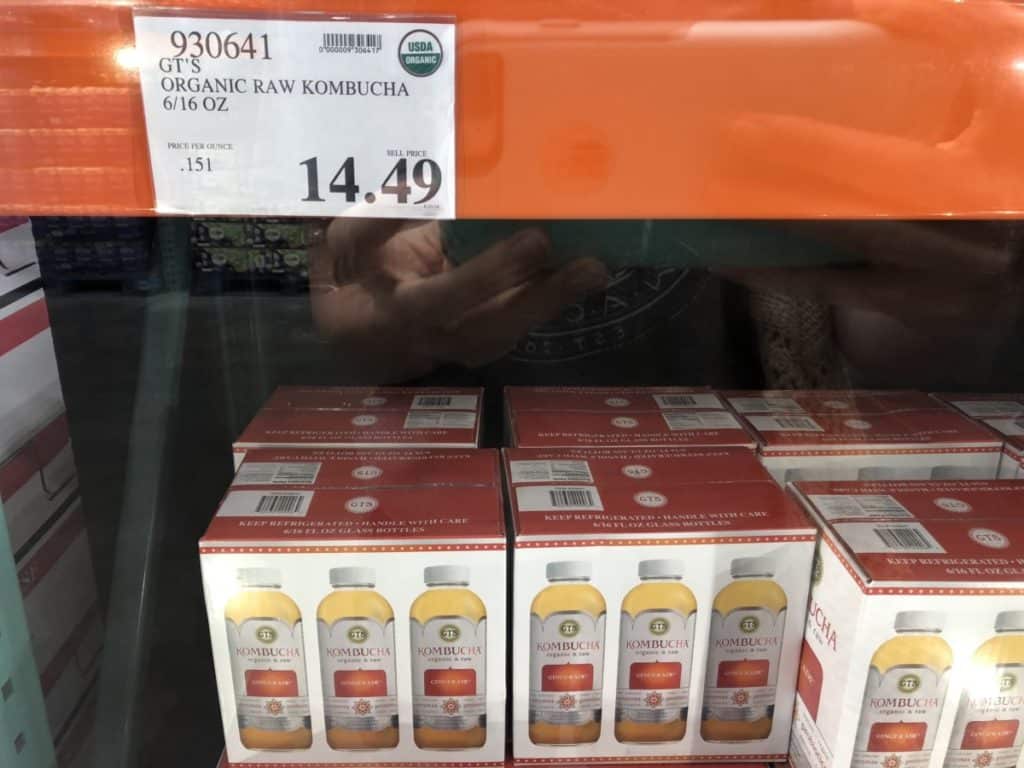 After buying the Gingerade six-pack a couple of times, I got a bit burned out, so I’ll usually wait now until GT’s kombucha goes on sale at Whole Foods for around that same price so I can choose a variety of flavors. (Kombucha is more of a treat than a necessity for me, so I usually just buy it when it’s a good deal.)

And if Costco starts carrying a mixed pack of GT’s flavors, I’ll be ALL over that.

Fresh Berries – I get so excited about going to Costco from the late spring to early fall because Costco has the BEST berries. 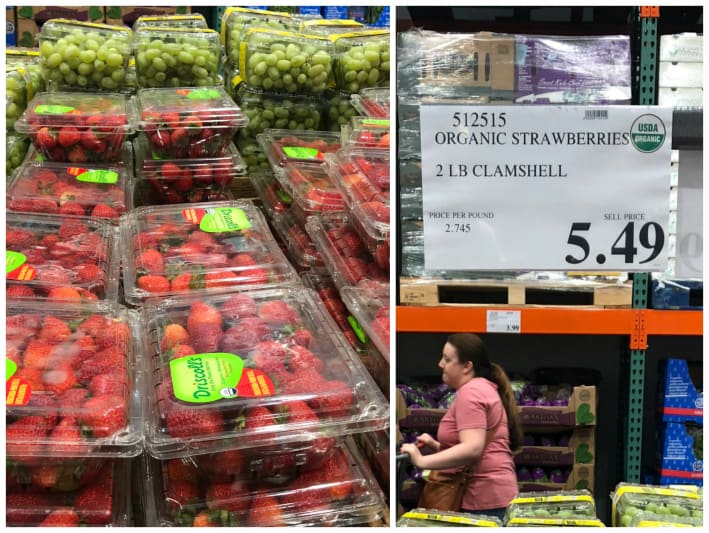 I almost always try to buy organic berries since they’re on the “dirty dozen” and Costco always has a great price and they’re almost always the biggest, sweetest, juiciest berries around.

Organic Apples – When they’re in season, Costco has great deals on apples (like $11 for 5 pounds of organic Pink Lady apples!). Since apples don’t go bad quickly and I eat one every day, it’s no problem to buy them in bulk.

Organic Meat – I don’t buy meat every trip, but Costco does have great deals on organic meat!

And those are most of my favorite items at Costco! I’ll sometimes throw in an extra treat like popcorn or dark chocolate, but for the most part, that covers what I purchase at Costco.

• Foods that I can’t eat fast enough on my own before they go bad (i.e. bags of 5 giant avocados or 6 bell peppers, a 3 lb tub of Fage yogurt, etc.)

• Items that are cheaper at the grocery store (on sale or at their regular price). While a lot of things are cheaper at Costco, not everything is. For example, the best price I’ve found for organic oats is actually at my local Whole Foods ($1.50/lb in the bulk bins)!

• Items that are pretty inexpensive to start with (i.e. rice), so committing to buy a giant quantity at only a marginally cheaper (or the same) price doesn’t really make sense for me personally

• Things that are a good deal but I don’t have a place to store them (i.e. 20 rolls of paper towels) 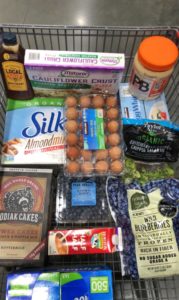 I hope this helps if you’re considering getting a Costco membership and trying to decide if it’d be worth it for you! I actually scored my membership on Groupon for 50% off, so it may be worth checking to see if any special membership deals are available in your area.

I’m really happy with my membership and think that it has more than paid for itself. Feel free to let me know if you have any questions about my Costco experience!

Welcome, I’m Liv! I started blogging in college to share easy meals I made in my dorm kitchen. Now in law school, my goal is still to share delicious, approachable recipes with simple ingredients. You can most often find me running, eating ice cream, and making a mess in my kitchen. More...