This mason jar banana pudding is made from scratch with real, recognizable ingredients for a sweet treat you can feel good about enjoying. I’m happy to partner with Bob’s Red Mill for this recipe post! 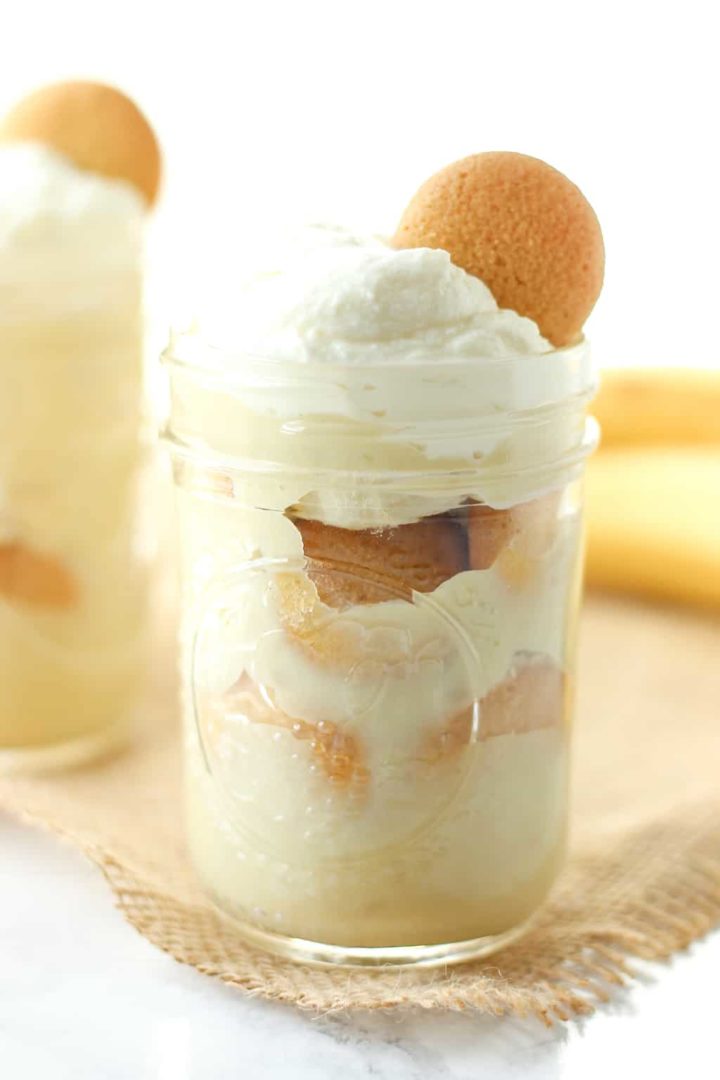 Banana pudding + mason jars are two classic Southern things, so it makes sense to combine them, right? I was excited when I had this burst of inspiration and I couldn’t wait to make them. Banana pudding is one of those things that looks so pretty layered in a big trifle dish and then looks really messy once you actually try to serve it. The mini individual servings fix that problem and they’re cute, too.

And then I googled “mason jar banana pudding” or probably actually something like, “jar mason pudding banana,” and someone had already done it. Multiple somebodies. I should’ve known. 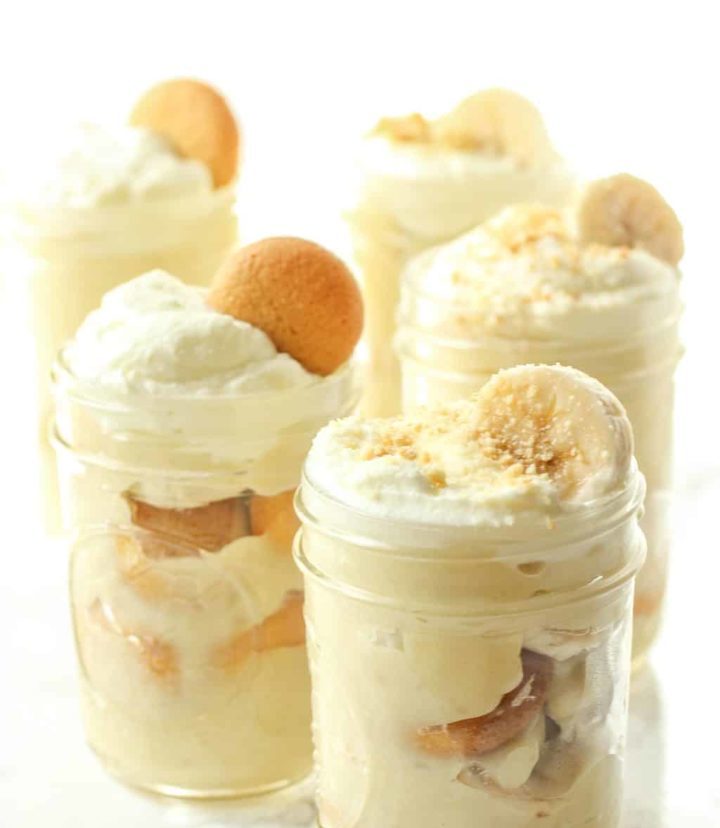 BUT the recipe itself is completely unique. Homemade banana pudding is something I grew up making in my house, starting with a basic recipe clipped out of a Southern Living magazine and making small adjustments to it over time. The ingredients in pudding mix aren’t the most natural, so I think homemade pudding is the way to go when possible.

Years later, I’ve ended up with a recipe that a) I think tastes better because it’s not cloyingly sweet and b) is actually a bit healthier in some ways. This mason jar banana pudding isn’t health food, but with all natural ingredients, reduced sugar, and controlled portion sizes, you can feel good about enjoying it for a sweet treat. And it’s perfect for spring/Easter baking because it just looks like spring.

• Replaced the dairy milk with almond milk,
• Upped the flour used to thicken the pudding since almond milk doesn’t thicken quite as much as dairy milk
• Increased the ratio of banana slices & vanilla wafers to pudding because I’m all about the mix-ins
• Halved the sugar. The vanilla wafers, bananas and (optional but non-optional) whipped cream is sweet, so the pudding part doesn’t need to be extremely sweet. I honestly think it tastes better this way.
• Used high-quality ingredients  like organic whipping cream, all-natural vanilla wafers, & organic unbleached all-purpose flour, like Bob’s Red Mill brand. 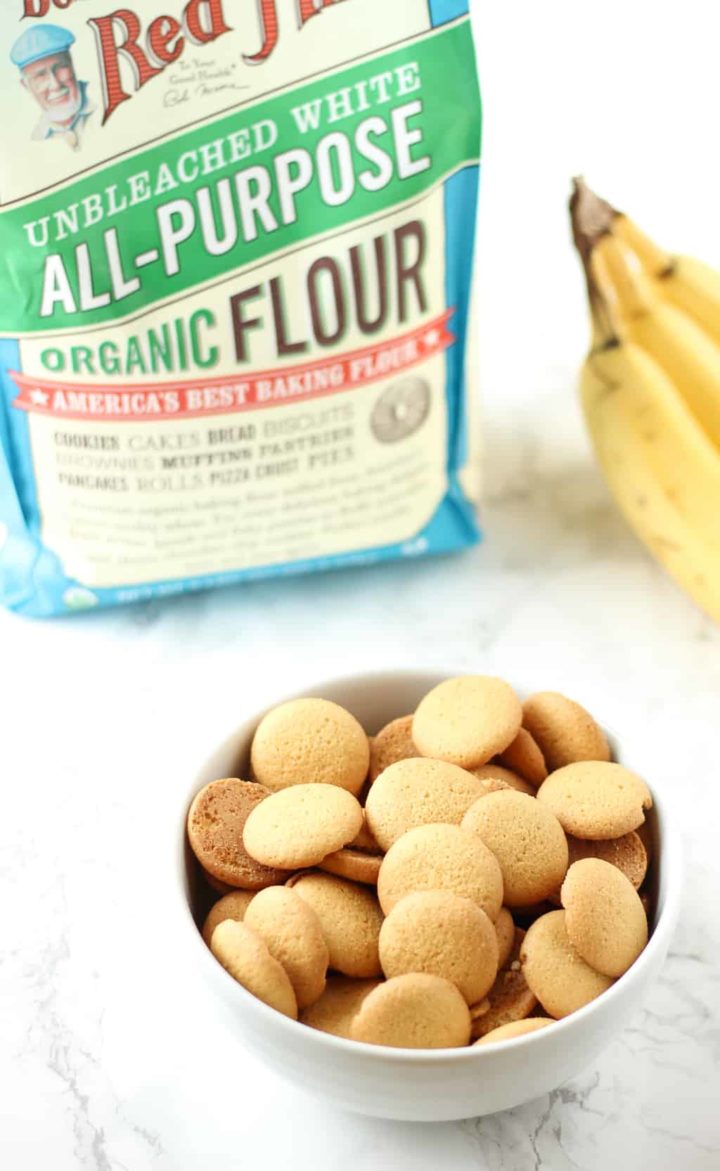 Unbleached flour is key and I love that this flour isn’t enriched with any additives. It’s freshly milled from organic hard red wheat and then just the bran and the germ are removed to turn it into the white flour perfect for baking that we know and love.

I found all-natural vanilla wafers with a fairly short, pronounceable ingredient list and bought the mini ones so they’d fit better in the small mason jars. I used half-pint jars, which are the perfect size for individual servings. I bought a pack of 12 for less than $10.

If you don’t have mason jars, you can absolutely make this banana pudding in an 8×8 or 9×9 dish and layer it the same way.

Like most of the recipes on the blog, I made these in my college dorm kitchen. I had to get creative when it was time to whip the cream and I had no mixer, so I poured the cream into one of the mason jars and shook, shook, shook probably for a good 10+ minutes. Around minute five, I started missing my stand mixer at home, but shaking it up worked surprisingly well (and seriously worked my arms)! 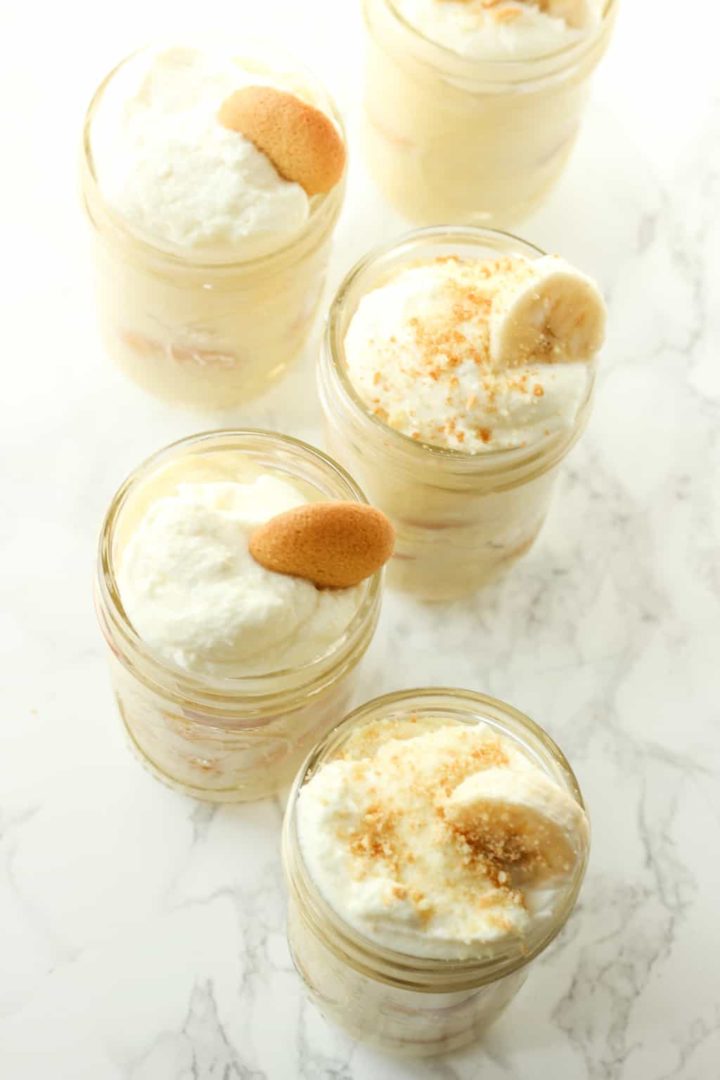 I made six of these last weekend and delivered them to friends as little gifts after I sampled one for quality control 😉 I got several requests for the recipe, so I think they were a hit. Here it is!

If you try this mason jar banana pudding, feel free to let me know in a comment or take a picture and tag me @livbane on Instagram. Hope you enjoy! 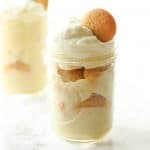 Top 6 Favorite Healthy Eating Tips I’ve Been Given
What Boxes Do You Put Yourself In?