You are here: Home / Life / I’m Engaged!! And the Proposal Story

I’m ENGAGED! It’s been a few days, and it still feels surreal. Even though I knew we’d get engaged in the near future, the proposal itself was a big surprise. And seeing the ring on my left hand still almost feels like I’m looking at someone else’s hand. 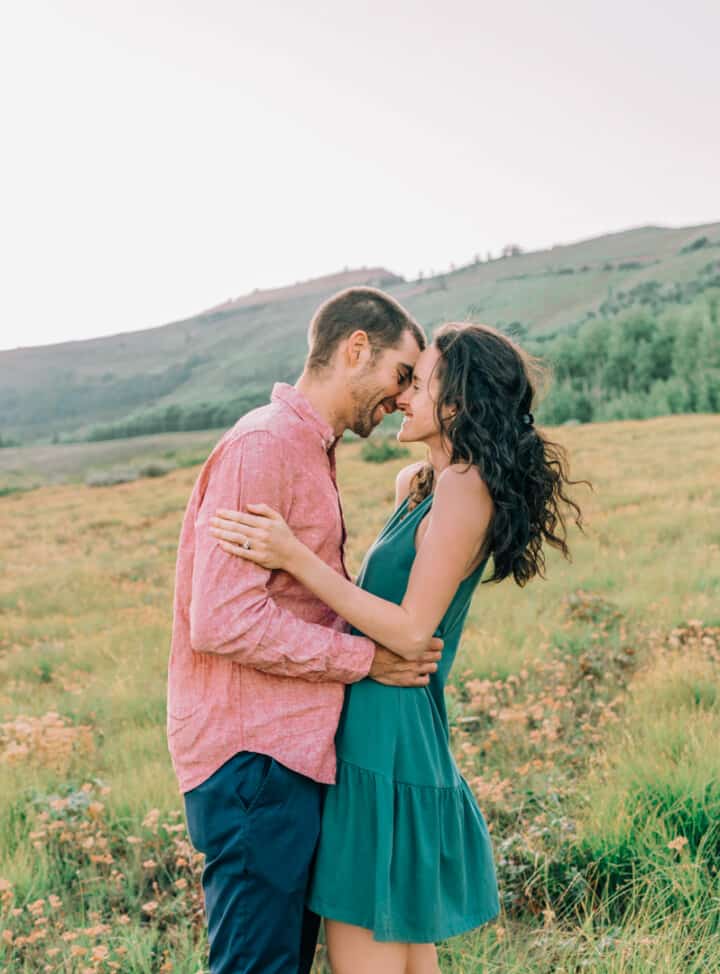 I always love hearing other people’s proposal stories, so I’ve been excited to share mine. After talking to girlfriends over the past few days, the questions that always come up are:

1. How did he propose?
2. The ring?!
3. Any idea of a wedding date?
So, I’ll definitely include those details!

For some post-Bar exam fun before I start my job, my boyfriend (now fiancé!), Bryan, planned a trip out west to Park City, Utah. He’s been working remotely during the day, and we spend a lot of time before and after work enjoying the outdoors running, hiking, and riding bikes.

As Bryan finished up work one day last week, he asked if I wanted to drive up to the mountains that evening. This didn’t raise my suspicions since we’ve been heading outdoors most nights to do something fun. I asked if I should wear hiking clothes, and he said he had a pretty spot in mind to sit and just relax instead. I threw on one of the two dresses I packed, and we headed out the door.

We grabbed takeout from a Mediterranean spot and drove a bit up into the mountains for a picnic. 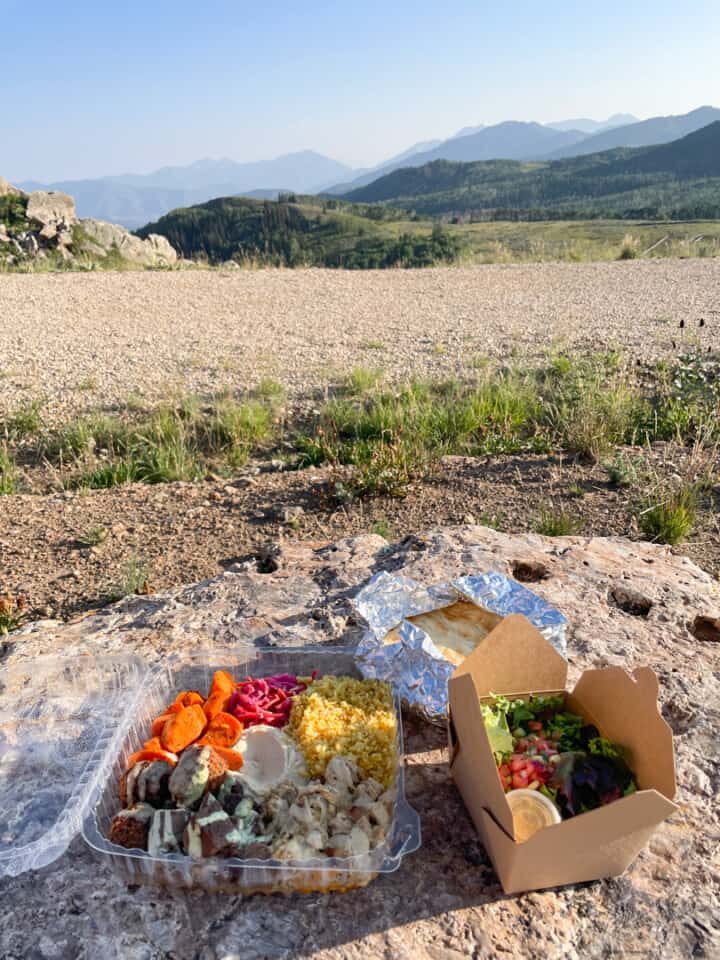 After eating dinner and chatting for a bit, Bryan said he wanted to show me Guardsman Pass nearby, the spot where his parents got married. It’s a beautiful meadow under the mountain peaks.

At this point, you might think I’d think a proposal was coming– we’ve been dating for a year and a half, talking about marriage, and now, he was taking me to a beautiful, romantic spot.

But I was completely unsuspecting. We’d been talking openly about engagement rings because Bryan said he wanted me to pick out my own ring (which I appreciate!), and I knew he hadn’t bought one yet.

In the car on the way there, I even joked that it was too bad there was no ring yet because Guardsman Pass would probably be an amazing and meaningful spot to get engaged. He just laughed, so I poked his pockets and said, “There’s no ring in there, right?!” while he grinned and nicely swatted my hand away.

We got out of the car and started walking through Guardsman Pass, and I spotted a photographer nearby taking photos for a family.

As we walked, Bryan began talking about how much he’d enjoyed our time together on this trip, and then he started talking about our relationship more generally. He was talking a bit fast like he was nervous, but I still somehow didn’t think anything unusual was happening and just assumed he was being extra sentimental for some reason.

Then, I heard footsteps crunching behind us. I glanced over my shoulder, and the family photographer I’d noticed earlier was now walking right behind US. I refocused on Bryan, but I suddenly had a strong feeling.

I quickly threw my phone on the grass nearby so I wouldn’t be holding my phone in all the pictures. (Bryan said later that I LAUNCHED it which was very funny to him.) I tried to concentrate on the sweet things that Bryan was saying, but my mind was racing and somehow blank at the same time. This was it! 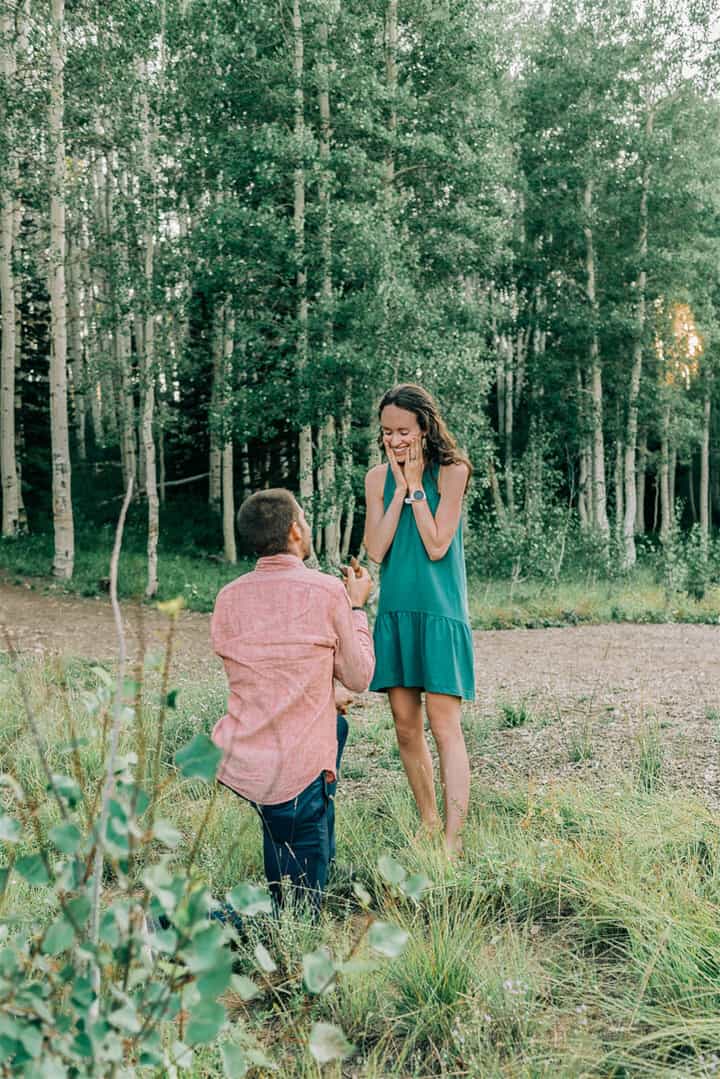 Bryan pulled out a little ring box (from the same pocket I’d been poking earlier!), knelt, and asked me to spend forever with him. I said yes!

At least, we’re pretty sure that’s what happened. Bryan said his mind went totally blank in that moment, too. It’s so funny how that can happen even when you both know it’s coming. 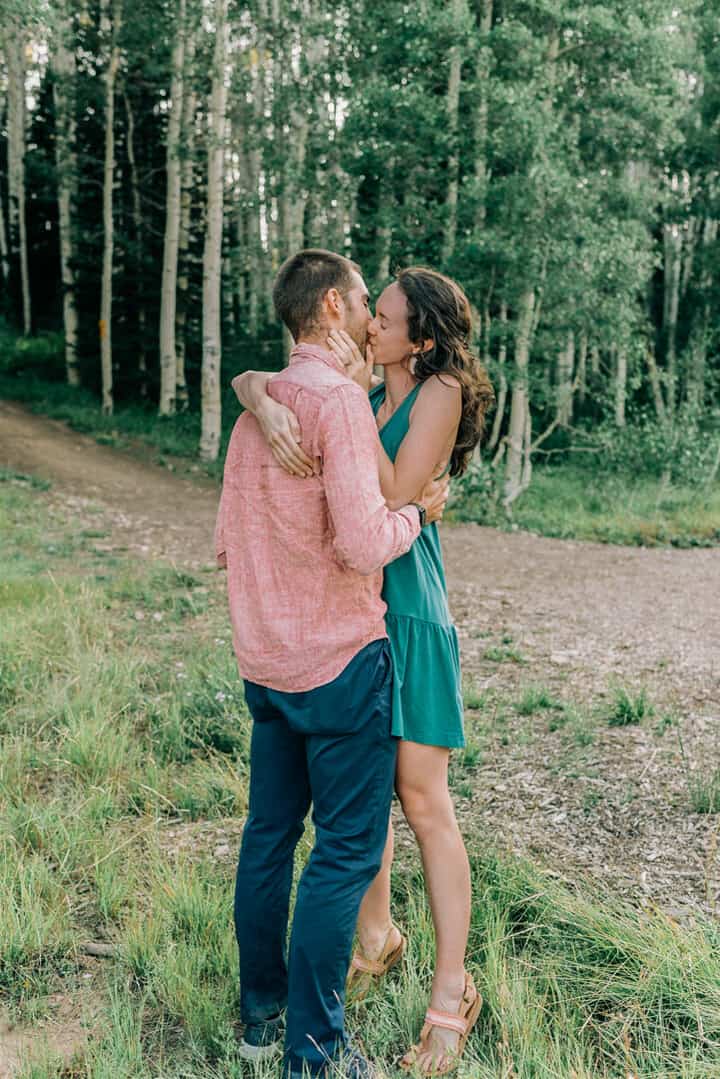 We FaceTimed both sets of parents and all of our siblings right away, too, and it was so fun to share the news.

One thing I want to always remember is how Bryan was that night. I’ve never seen him cry or get as emotional as he did in that moment. He’s my rock and although he’s good with my tears, he’s not usually one for tears or big shows of emotion himself. Seeing him tear up as he talked about how much I mean to him will always be one of my very favorite memories.

I also asked him once if he thought he’d be nervous to propose, and he’d said no. But when the time actually came, he says he did get really nervous! (Why do I love that so much? ❤️ ) 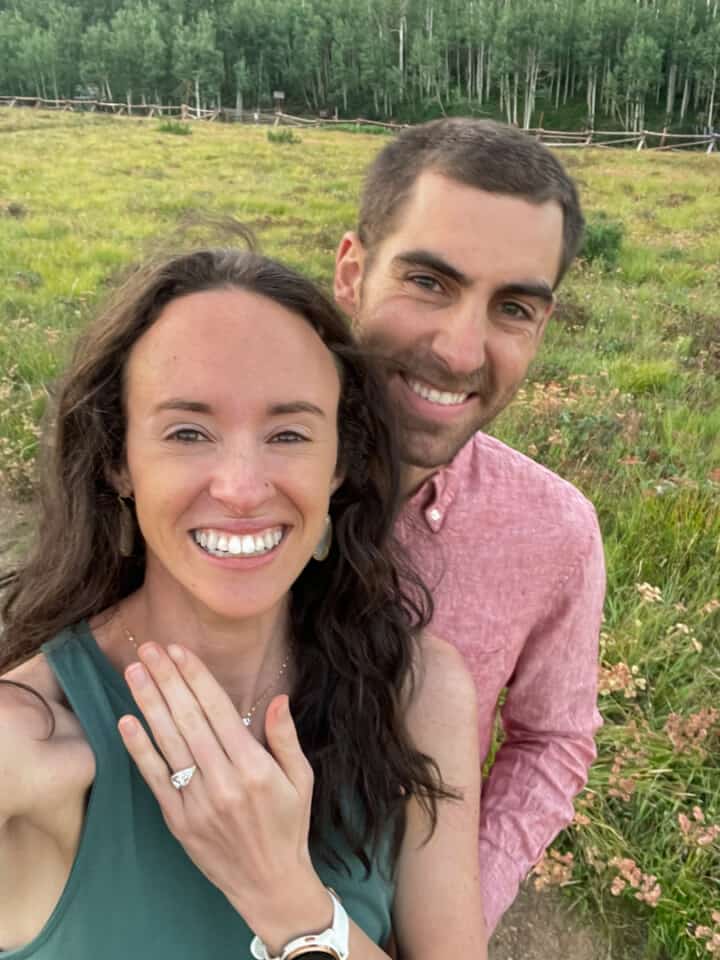 It was perfect. I didn’t have a lot of opinions about how I’d like for a proposal to happen, but I did hope that there’d be a photographer involved so I could remember it all forever. And there was!

It was especially meaningful, too, that Bryan’s parents got married in this exact spot, and Park City is one of Byran’s favorite cities that he’s been talking about wanting to show me for as long as we’ve been dating. And we’ll get to celebrate with our families when we get back to Raleigh, NC. 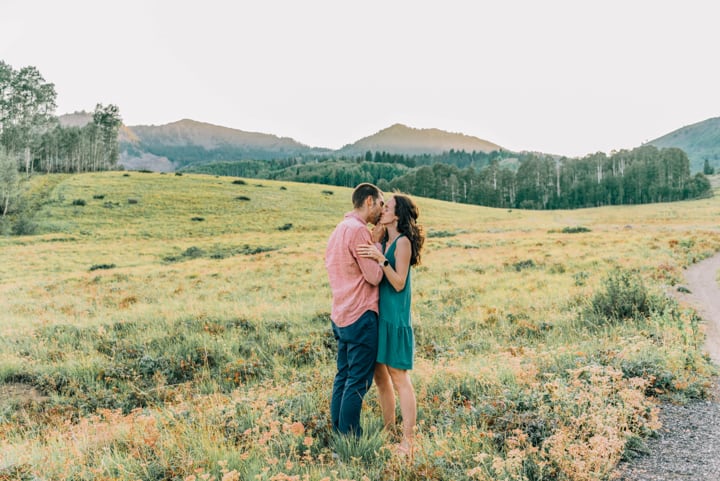 In all of my post-engagement phone calls, the question that always comes up is about the photographer and if she was just pretending to take photos for a family. She was actually shooting a legitimate family session, and Bryan had texted her during our dinner date as she wrapped up her photo session with the family to let her know we were coming. So, she had a perfect cover! Our photographer was Whitney Charles.

Bryan proposed to me with his great grandma’s ring! Now, everything made sense. I was so stuck on the fact that I knew he hadn’t bought a ring yet that I never considered there was a different ring possibility for a proposal. 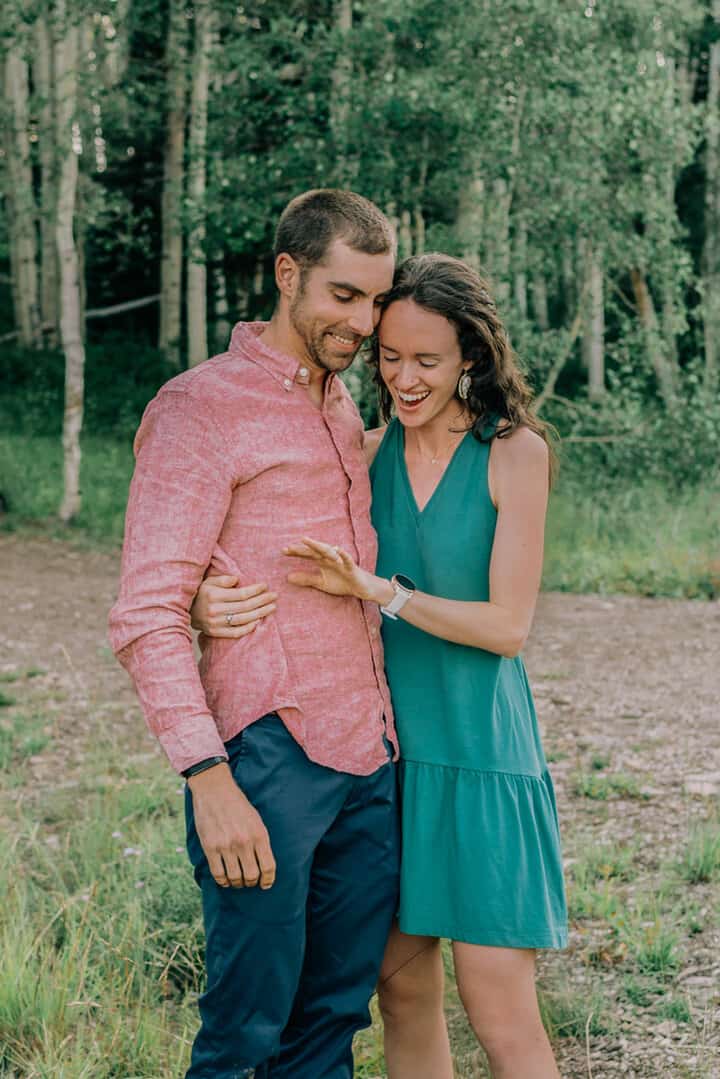 Bryan has still encouraged me to go forward with the original ring that I fell in love with when we were ring-shopping but said that it was particularly meaningful to him to use his great grandma’s ring in the proposal. Then, we could figure out the rest of the engagement ring plans from there together. I love that. 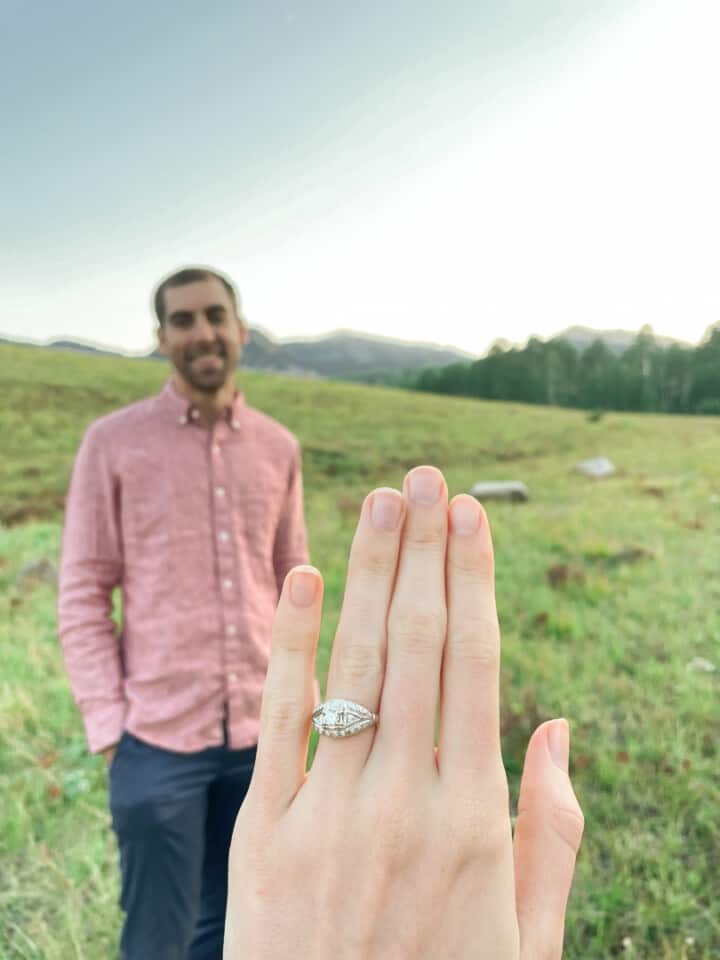 This one is still a big question mark. I’ll let you know when we do…

Changes to the Blog

This section was suggested by Bryan himself. He has requested to add an “Unhealthy Bryan” section to the blog to contrast with Healthy Liv. 😉  In reality, he eats pretty similarly to me 75% of the time, just at least three times the amount. But he is also a baked goods connoisseur and consumes large amounts of cookie dough and cookies. I have suggested that he start an unhealthy Bryan Instagram account instead…

He also says to expect more home decorating and travel content on the blog and on Instagram, which I will happily supply! I just signed a lease for my first house, which I’ll move into in a couple of weeks, and Bryan will join once we’re married.

As always, thanks for reading!

Question for you…if you’re engaged or married, how did the proposal happen?!

Getting Started Gluten-Free: My Pantry Staples
Banana Blender Pancakes for One (Gluten-Free)