You are here: Home / Life / What I Ate Wednesday…Back at Home

Happy Wednesday! I hope you’ve had a great week so far!? Mine has been WONDERFUL. Since getting home on Sunday night, I’ve been able to get 9+ hours of sleep most nights, catch up with a few friends, spend time with my family, go on some longer runs, and cook more than I usually do at school. Starting on Thursday, I’ll be doing a 9-5 internship a couple of days per week, so I’m enjoying my long days of freedom before then.

In case you’re new to the food blog/healthy living blog world, WIAW (What I Ate Wednesday) posts were created by a blogger named Jenn from Peas and Crayons and are now hosted by a different blogger each week. world.com is hosting today! They’re a fun way for food and healthy living bloggers to share food inspiration by blogging about a full day of eats. I haven’t done one in a while, so I thought it’d be fun to do one chronicling yesterday’s eats since I tried a couple of interesting, new-to-me things.

Breakfast was pretty standard– just a veggie and cheese omelet after a longish (8 miles) run, topped with salsa. 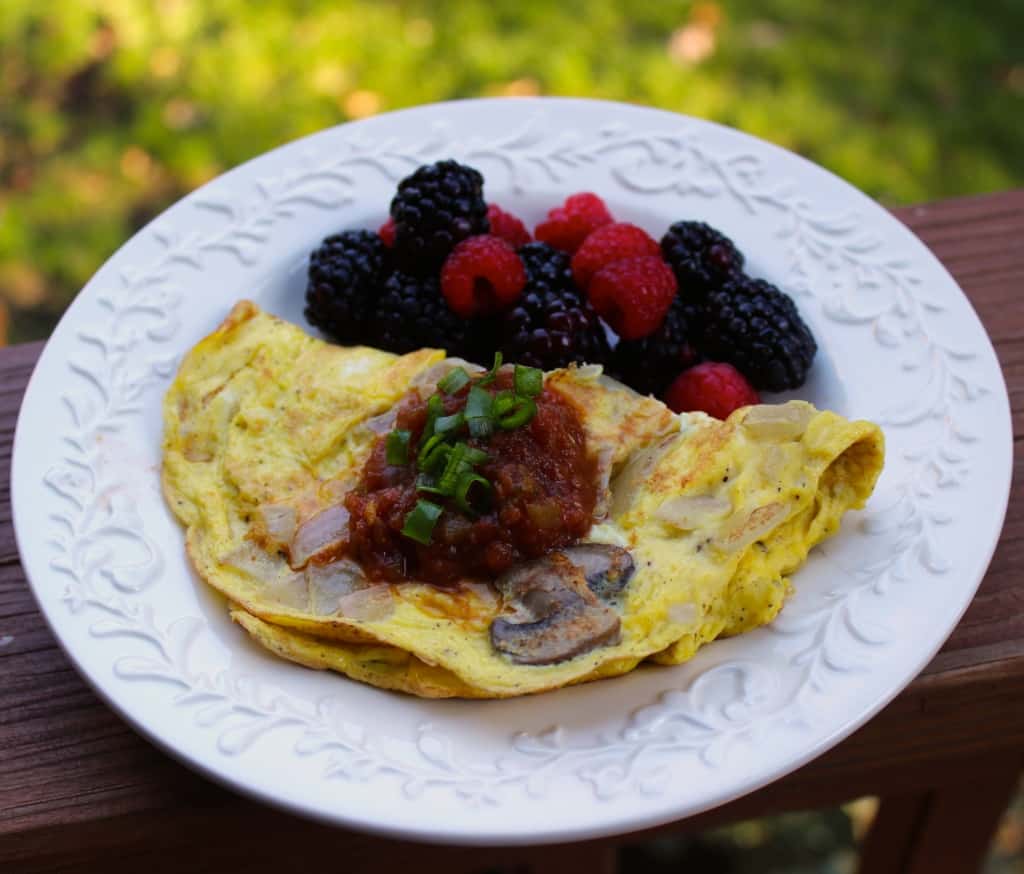 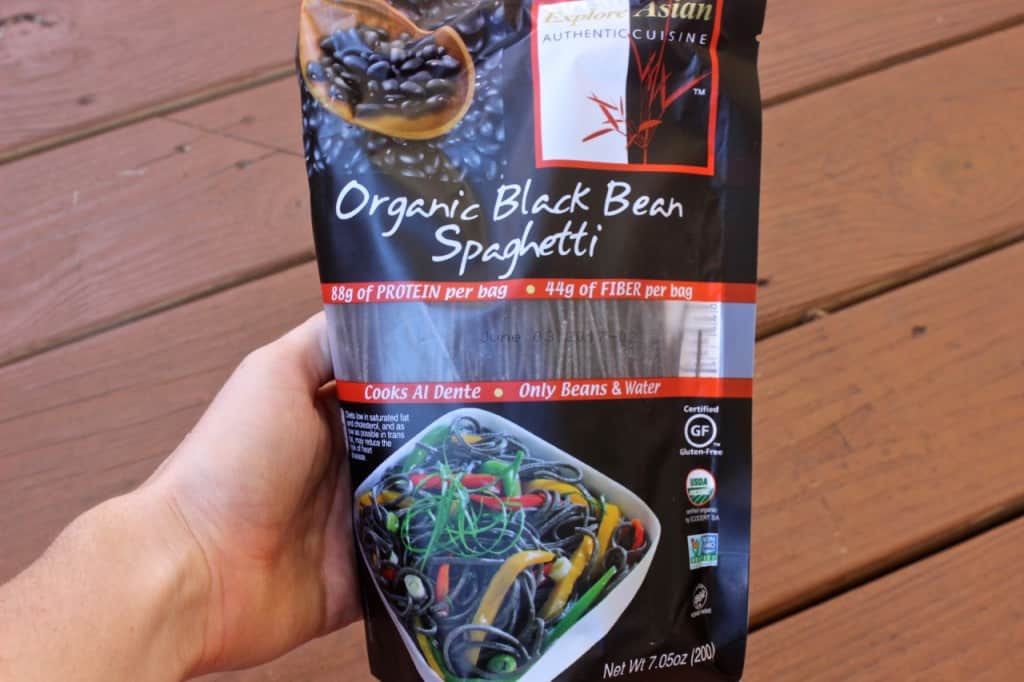 I tossed mine with a bit of olive oil and a sprinkle of salt, pepper, garlic powder, parmesan cheese, oregano, and parsley. Since the pasta is already packed with so much protein, there’s no need to top it with meat sauce or add another additional source of protein! 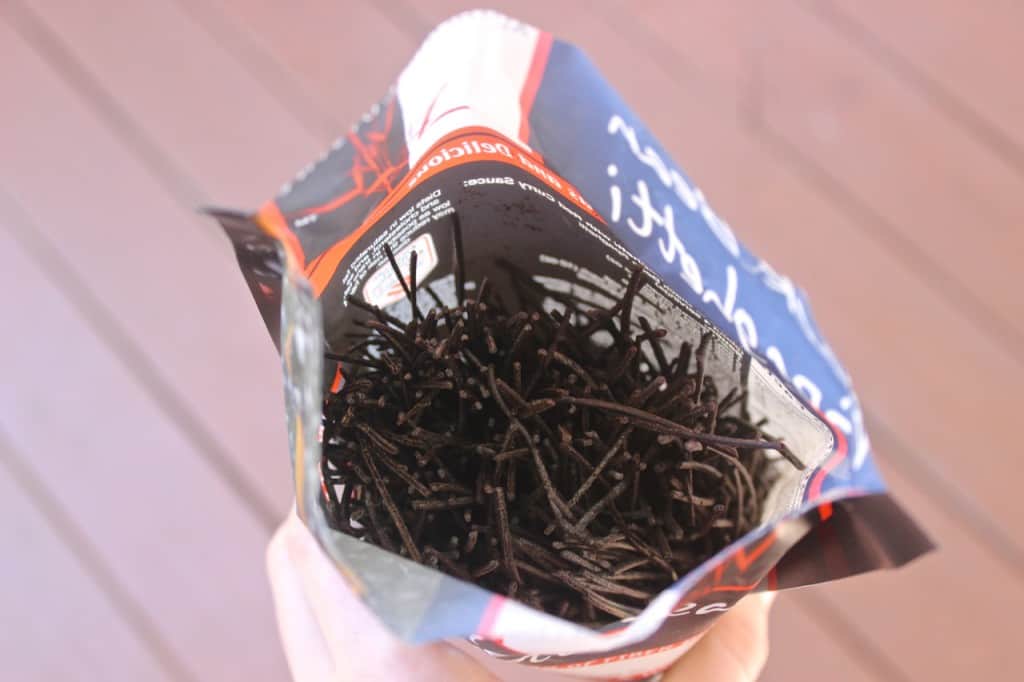 I’m a tough critic of healthy items that are supposed to replace less healthy foods, and I find that these noodles don’t have quite as much flavor as regular pasta and the texture is a little bit chewier, but I’ve found actually myself really enjoying them both times I’ve made them. I think they’re a great addition to my diet, but they probably would never fully replace good ol’ regular pasta for me.

We ordered our black bean pasta from a website called Thrive Market that has great deals on healthy pantry staples like oats, coconut milk, and nuts, as well as natural beauty products and other things like that. I’ve also found them on Amazon. 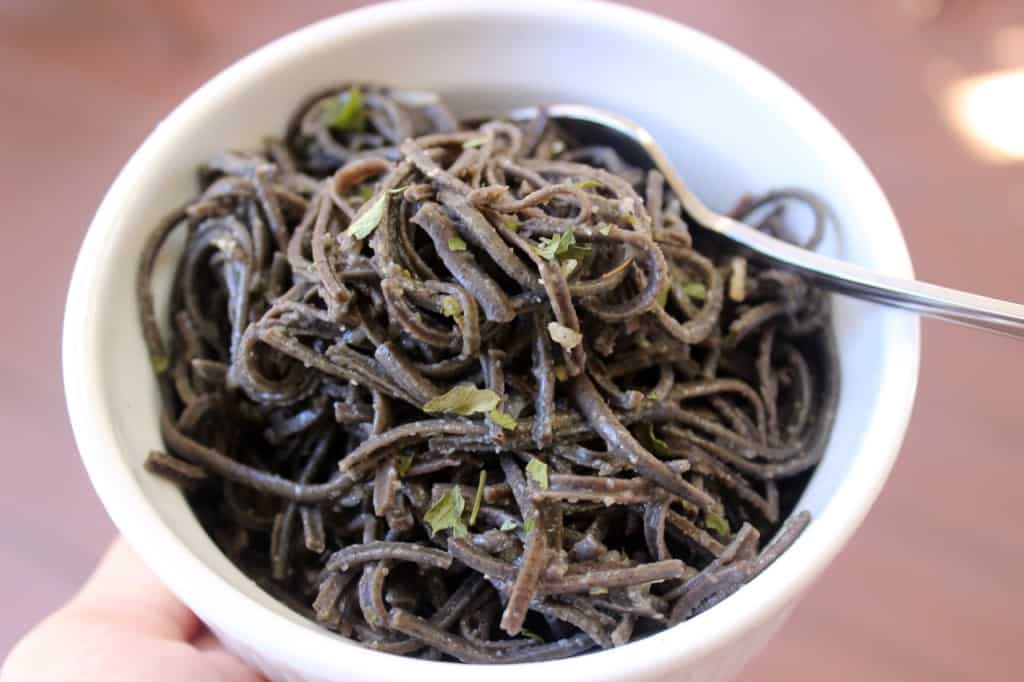 For an afternoon snack, I had a cup of Siggi’s mixed berries skyr, which is super thick and full of protein like Greek yogurt. 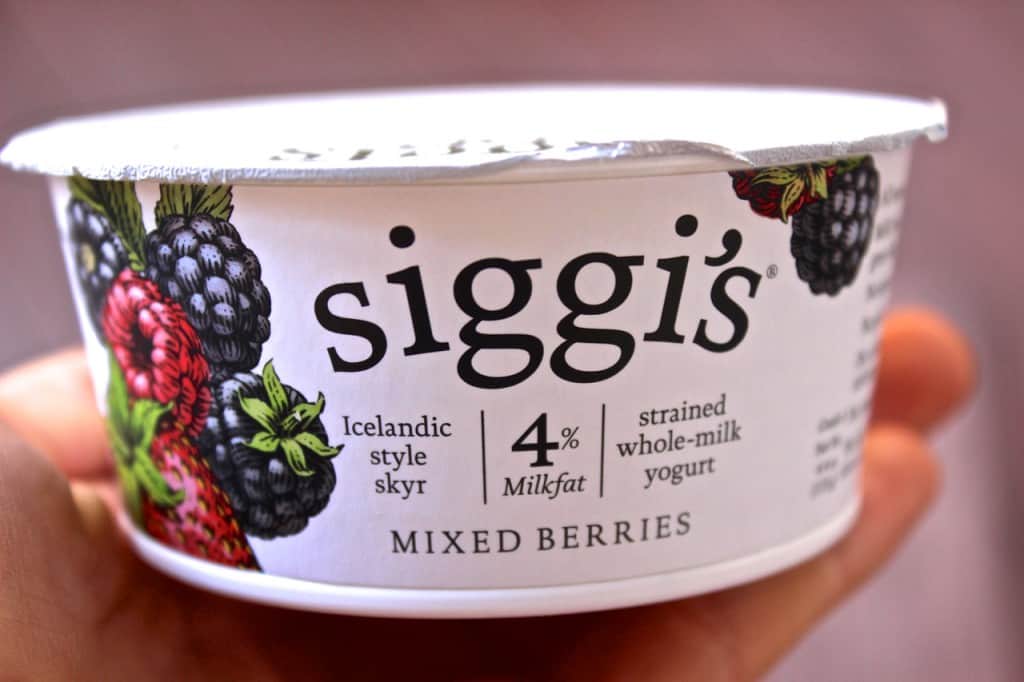 I also tried my hand at making kale chips for the first time using the kale from my mystery produce box. I wouldn’t say they taste quite like potato chips, but they were a great little snack. I’ll share the recipe for these later on this week. 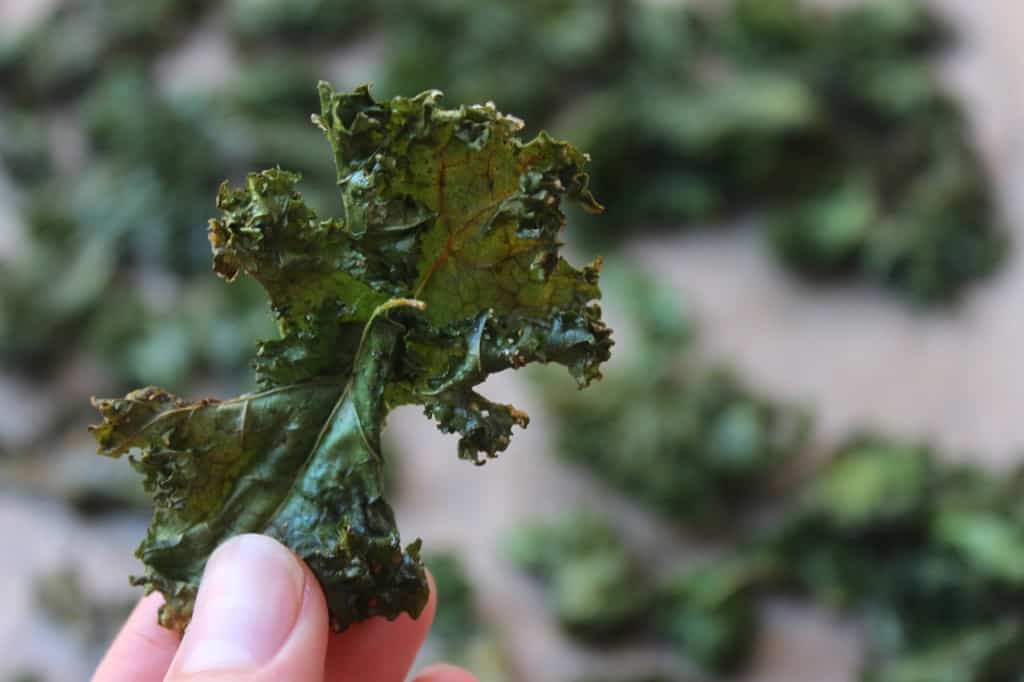 I also made a giant “green” smoothie for a later afternoon snack which included unsweetened almond milk, half of a can of coconut milk, fresh spinach, frozen mixed berries, and frozen bananas. 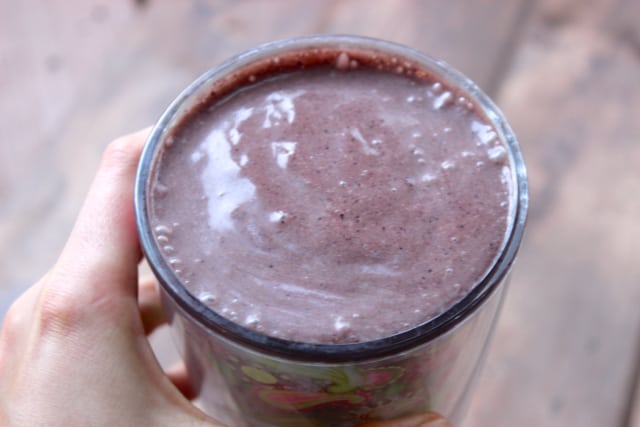 For dinner, I had a huge salad with chicken, lots of veggies, guacamole, and steamed broccoli. 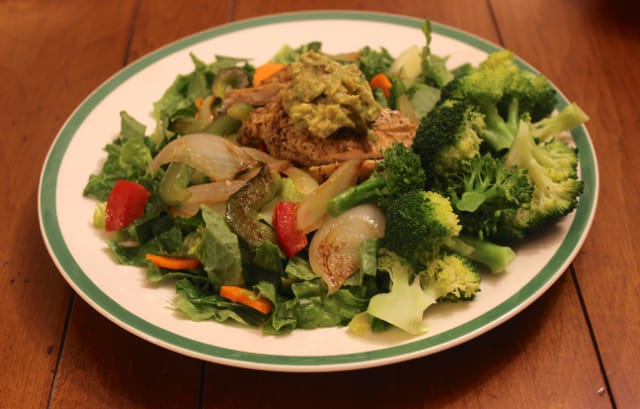 And after dinner, my brother and I did my favorite Christmas tradition– decorating our tree while watching Elf. 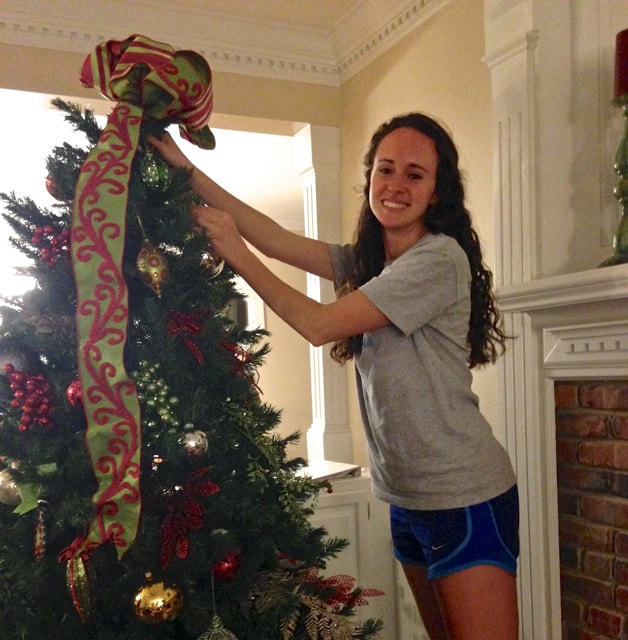 Can you believe Christmas is only 9 days away? And that, at least here in NC, it’s still warm enough to be wearing shorts?! 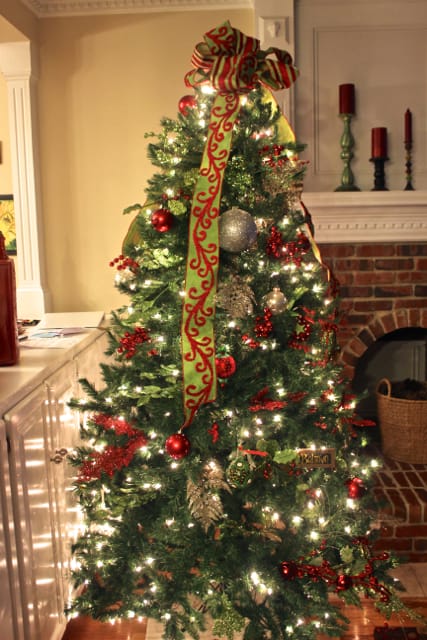 So tell me…
What’s the best thing you’ve eaten or cooked recently?
Have you ever tried black bean or edamame pasta?
What’s your favorite Christmas tradition? When do you typically decorate your tree?
Growing up, my family usually decorated our tree on the day after Thanksgiving, but our tree decorating has started happening later and later each year.