Hi and happy Monday! Hope you had a great weekend. Mine was a special one because my little brother graduated from high school on Friday!

We kicked off the graduation celebration on Thursday with a special family dinner at home of Caleb’s choice. On the menu? Grilled steak, roasted veggies, and cheesecake. 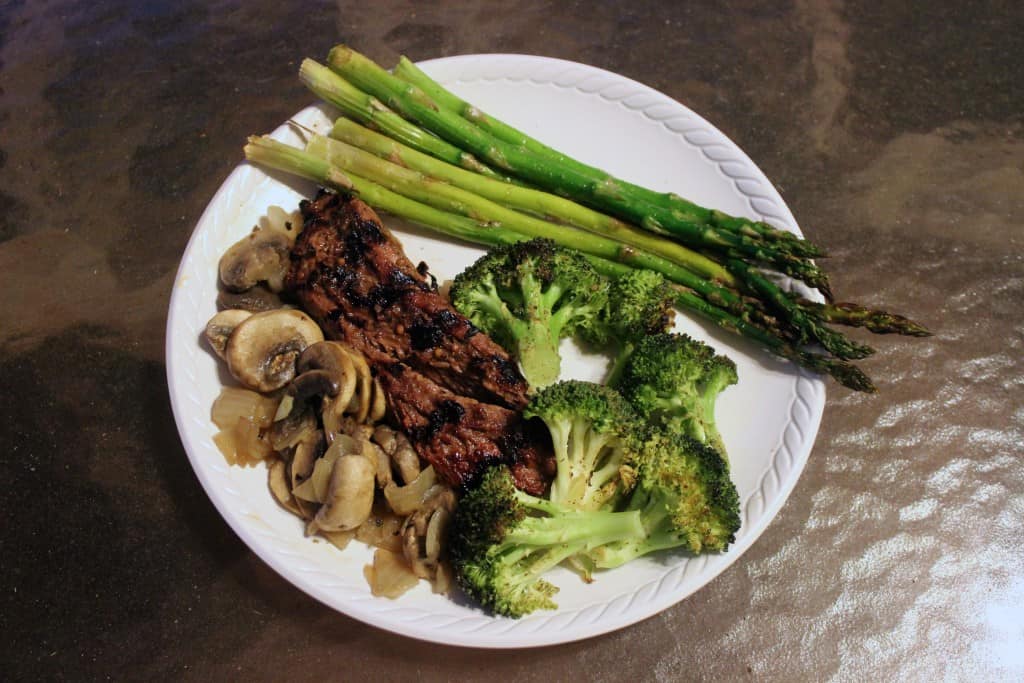 I’ll take a big bowl of pasta over steak any day and I have a major sweet tooth, so even though the steak was good, my favorite part was the cheesecake. Caleb asked me to make him a cheesecake, and he agreed to be my sous chef. 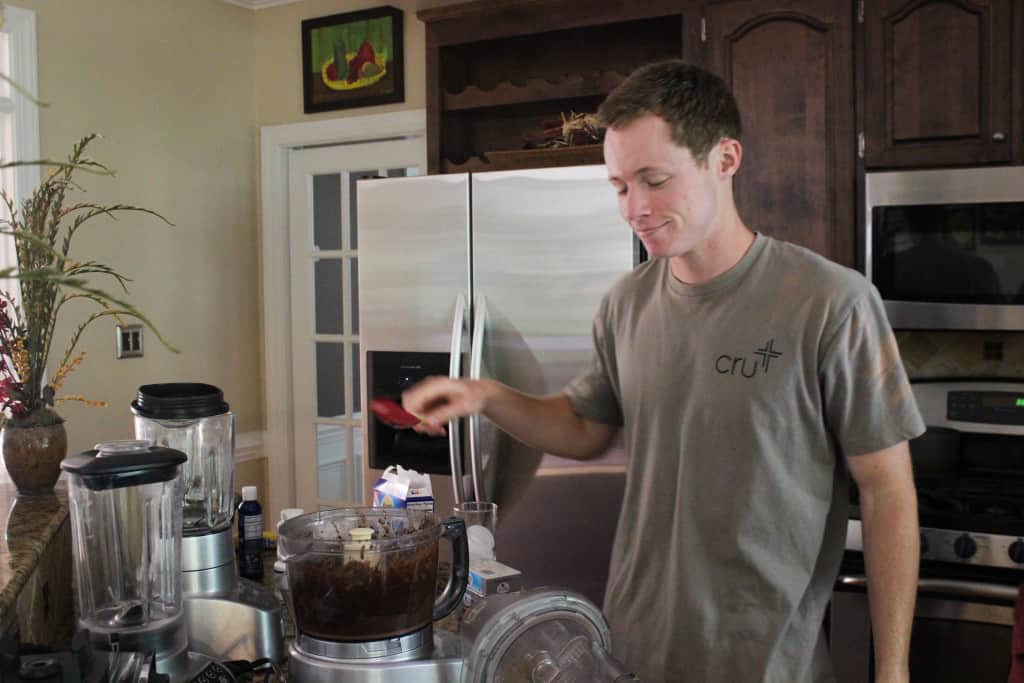 I came up with the idea of making a “half baked” cheesecake, inspired by one of our favorite Ben & Jerry’s flavors with vanilla & chocolate ice creams and cookie dough & brownie bites. Be warned: there’s absolutely nothing healthy about this cheesecake 🙂 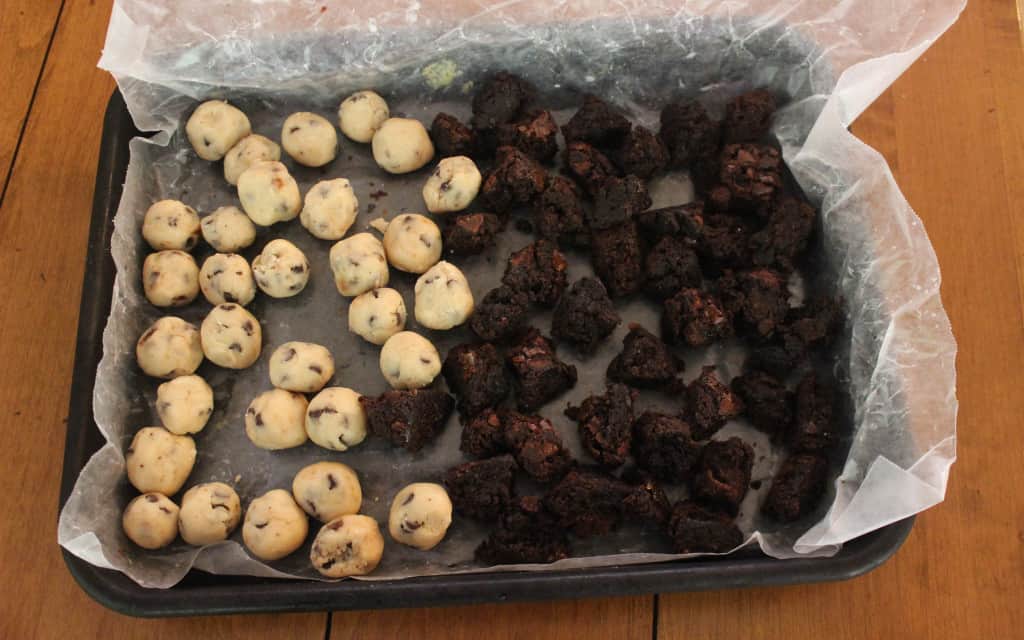 Half of a batch each of cookie dough and brownies, which we popped into the freezer for a few hours so they’d maintain their shape in the cheesecake

After all of our modifications, I was a little bit nervous about how it’d turn out. I’m much more comfortable heavily adapting recipes when I cook rather than bake, since baking is so much more of an exact science.

Fortunately, the cheesecake turned out wonderfully– smooth, creamy, and packed with mix-ins, just like we were hoping. It also didn’t crack while baking, which was great (although the ganache would’ve been perfect for hiding any unsightly cracks). 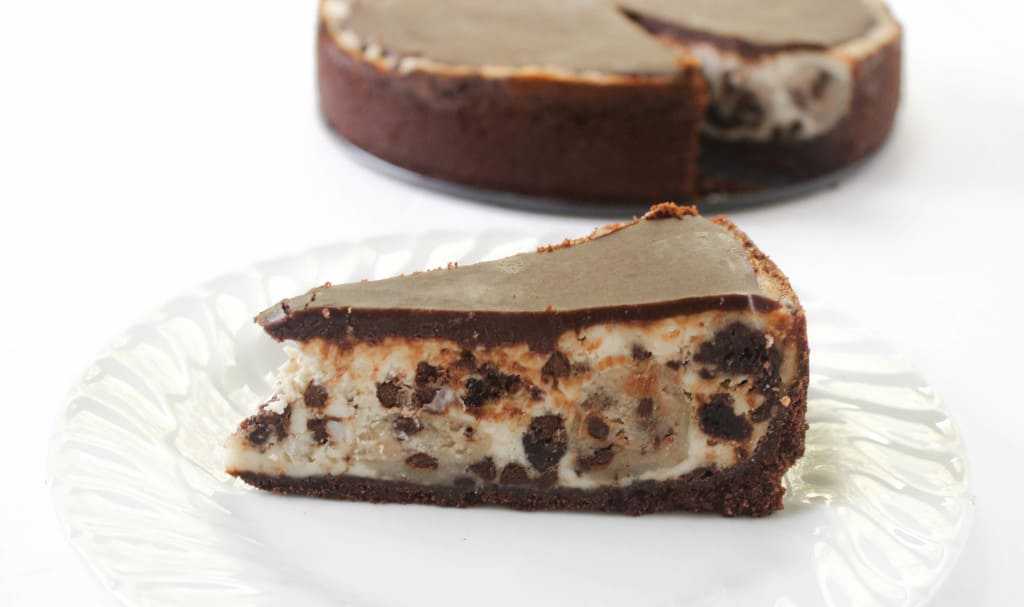 Friday was Caleb’s actual graduation day, and my grandparents and cousin flew into Raleigh that afternoon.

I grew up in Atlanta living in the same neighborhood as my cousin’s family– our houses were right across the street from each other! We have so many fun memories of playing outside together, selling lemonade, turning their basement into our fort, having sleepovers, making breakfast for our families on the weekend, and lots of others, and even though we don’t get to see each other nearly as often now, it’s always really special when we do. 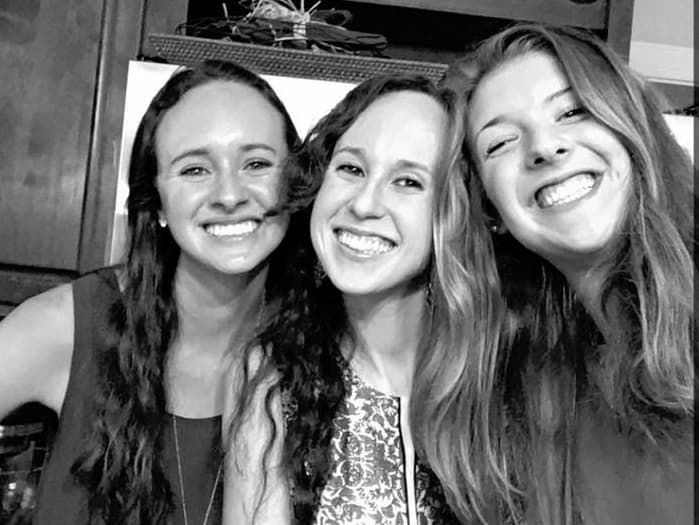 We had an early dinner on Friday night before Caleb’s graduation. Caleb designed this menu again and this time, he chose strawberry salad with poppyseed dressing and lasagna. 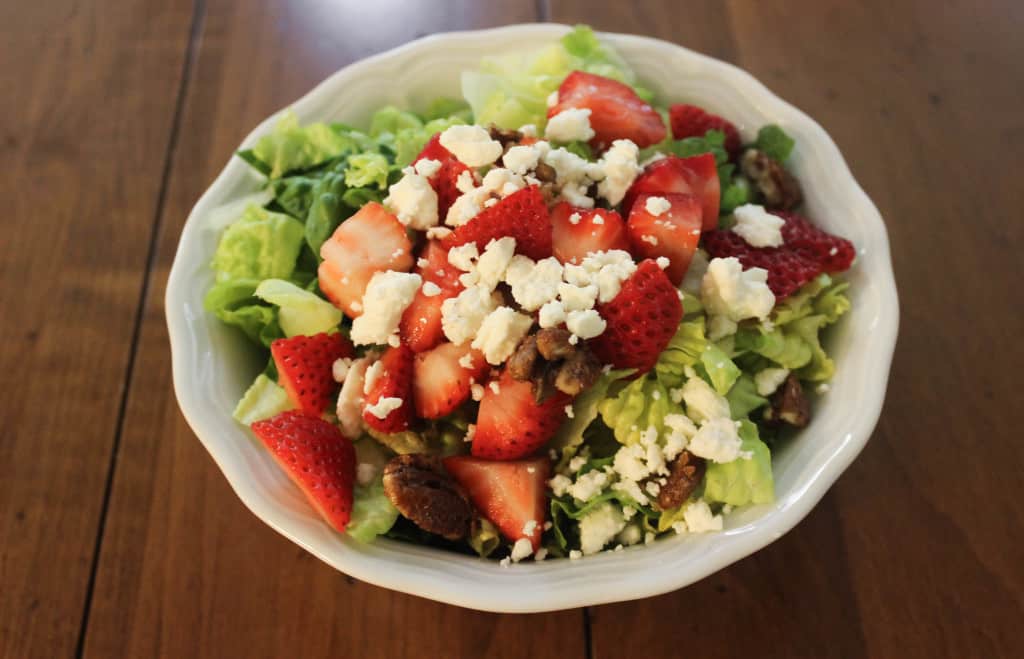 We snapped a few family pictures and headed to Caleb’s graduation. 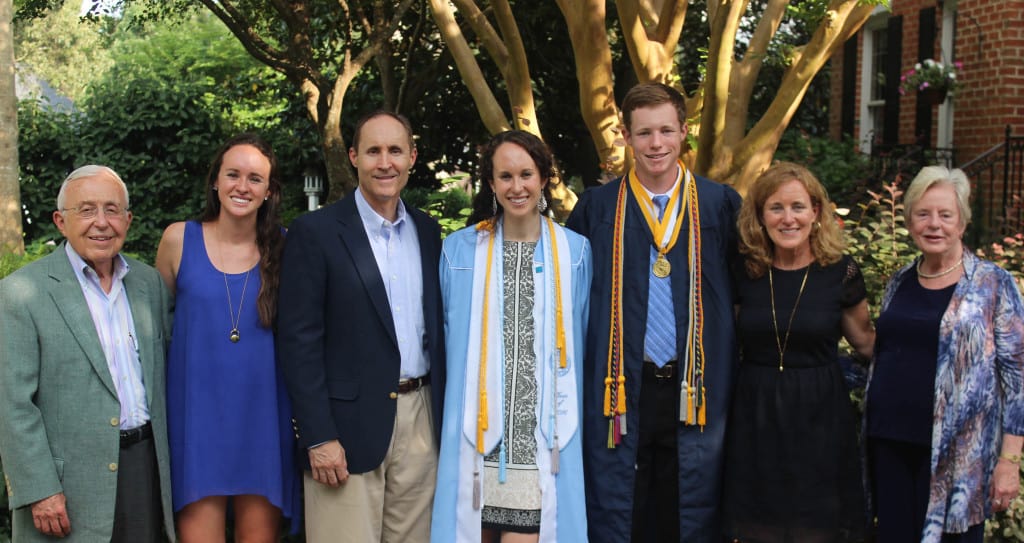 Very proud of this guy! 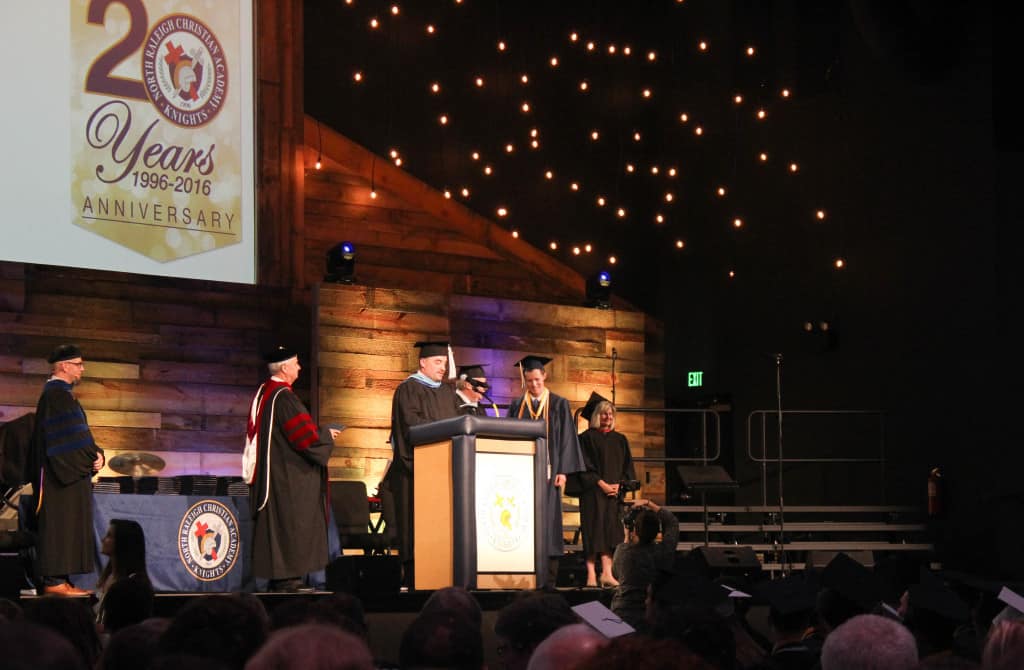 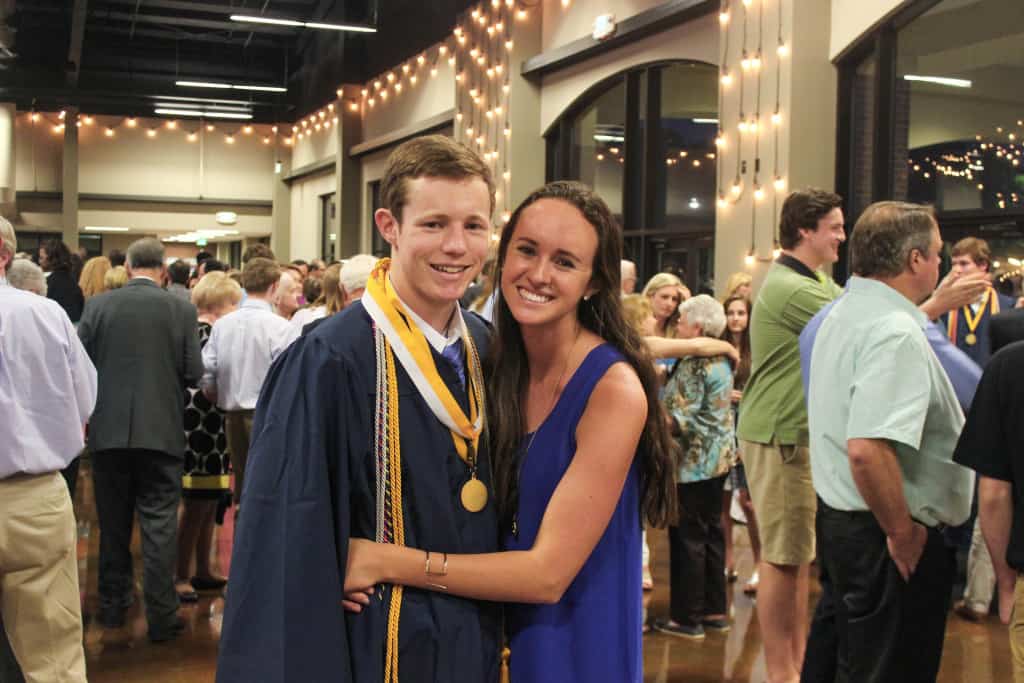 After the ceremony, we headed home for cheesecake round 2 and Caleb’s graduation video. My sister put together a picture slideshow, which we watched twice since my mom was feeling extra sentimental. And then my cousin and I had a sleepover in my room and talked late into the night, just like old times, before she and my grandparents flew out the next morning. I was sad to see them go, but I’m working on plans to see them all again soon!

So tell me…
Steak or pasta?
If you got to design your own menu for a celebratory dinner, what would be on it?
Do you like following recipes closely (like my mom!) or do you usually do your own thing (like me!)?