You are here: Home / Life / My sister’s ENGAGED!

After a couple weeks of a break from blogging during finals, the end of the semester & celebrating Christmas with my family, I’m back with exciting news: my sister’s engaged!

If you’ve been reading the blog for a while, you might remember her popping up from time to time since we had lots of dinner dates, study sessions, girls’ nights, and grocery store trips while she was at UNC with me. Now, we spend most of our time together on long-distance phone calls while we run at the same time, just a few states apart. She’s always been one of my best friends, and I’m so happy for her.

I always love hearing about other people’s relationships, proposals, etc. so I thought it’d be fun to share her story here. Get ready for lots of pictures 🙂 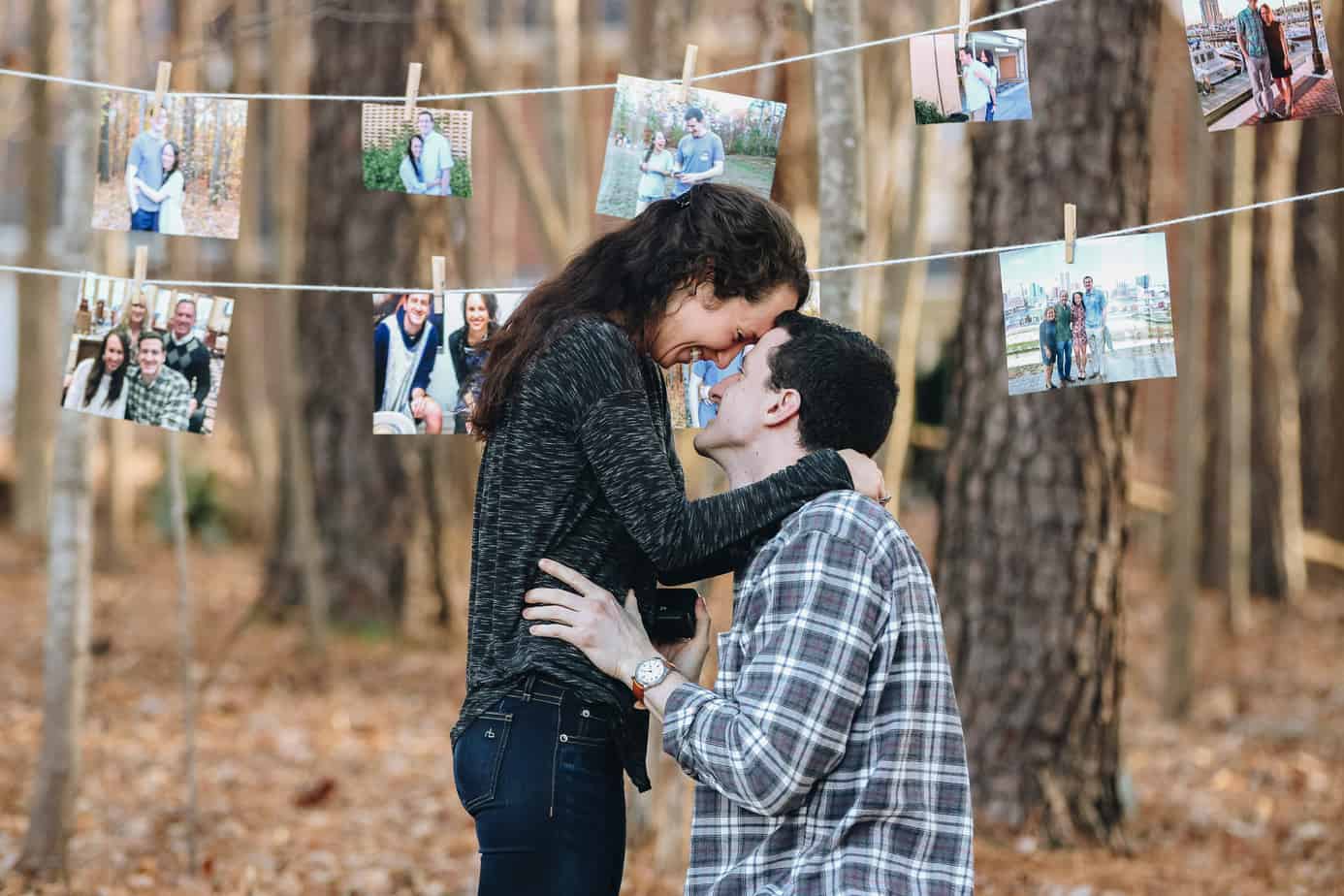 So, my sister, Marissa, started grad school at Johns Hopkins this year. On her second day in Baltimore, she met a guy named Alex in her master’s program, and they hit it off right away. Ris almost immediately knew there was something different about Alex (besides the fact that he’s 6′ 7″!) She called me the morning after they’d hung out talking for the first time the previous night, and she told me she thought she could marry him.

After just a few more months passed, they decided they wanted to be together forever. When you know, you know, I guess!

Alex and Marissa planned to come stay with our family for a couple of weeks in Raleigh, NC, during their winter break. Alex reached out to our family to help him plan a proposal for Ris in Raleigh since he’s only been here once before– about 24 hours for Thanksgiving when they stopped on their way to visit his parents in South Carolina. 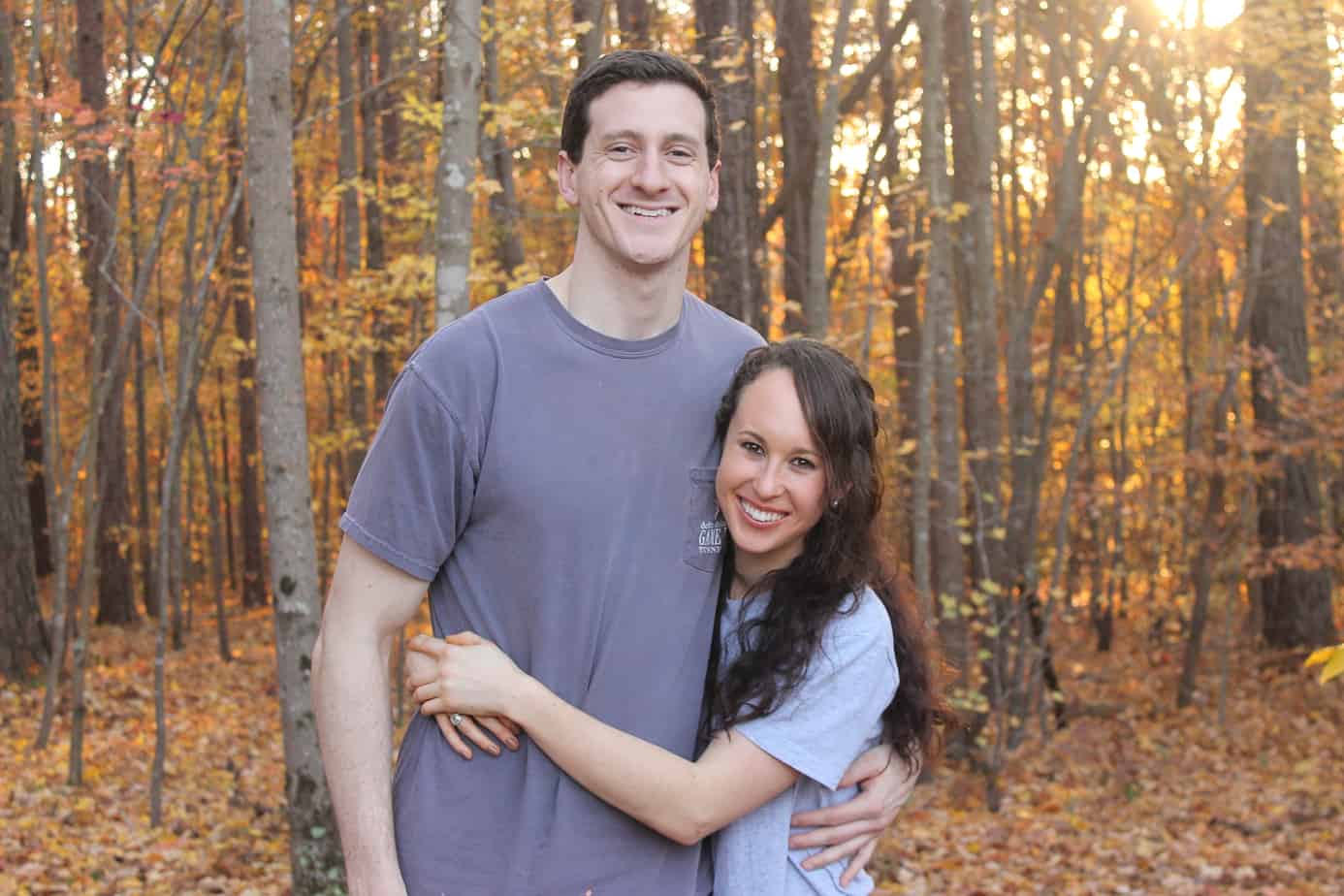 Marissa and Alex had talked about marriage enough that she knew a proposal was coming soon, but she didn’t know when or how it would happen.

Marissa and I have talked about our “dream proposals” with each other in the past and have said that something romantic, semi-private, and with family close by would be perfect. Public proposals can be fun, but we both agreed they wouldn’t be our thing. Marissa mentioned she’d want to have lots of pictures from the proposal, too, just to preserve that memory forever. So, that’s pretty much what I told Alex.

Alex asked if there was a special place to my sister in Raleigh, and I really couldn’t think of one. We moved around a good bit and Ris only lived in Raleigh for her last two years of high school, so there really isn’t one significant place in Raleigh that we always visited growing up.

We do have a greenway that runs through our neighborhood, though, and both my mom and I separately suggested it could be a cool place to propose. I had the idea of placing pictures or rose petals or something along the trail to make it more thoughtful, and Alex liked the picture idea. Then, he had the idea of writing something meaningful on the back of each picture, too. 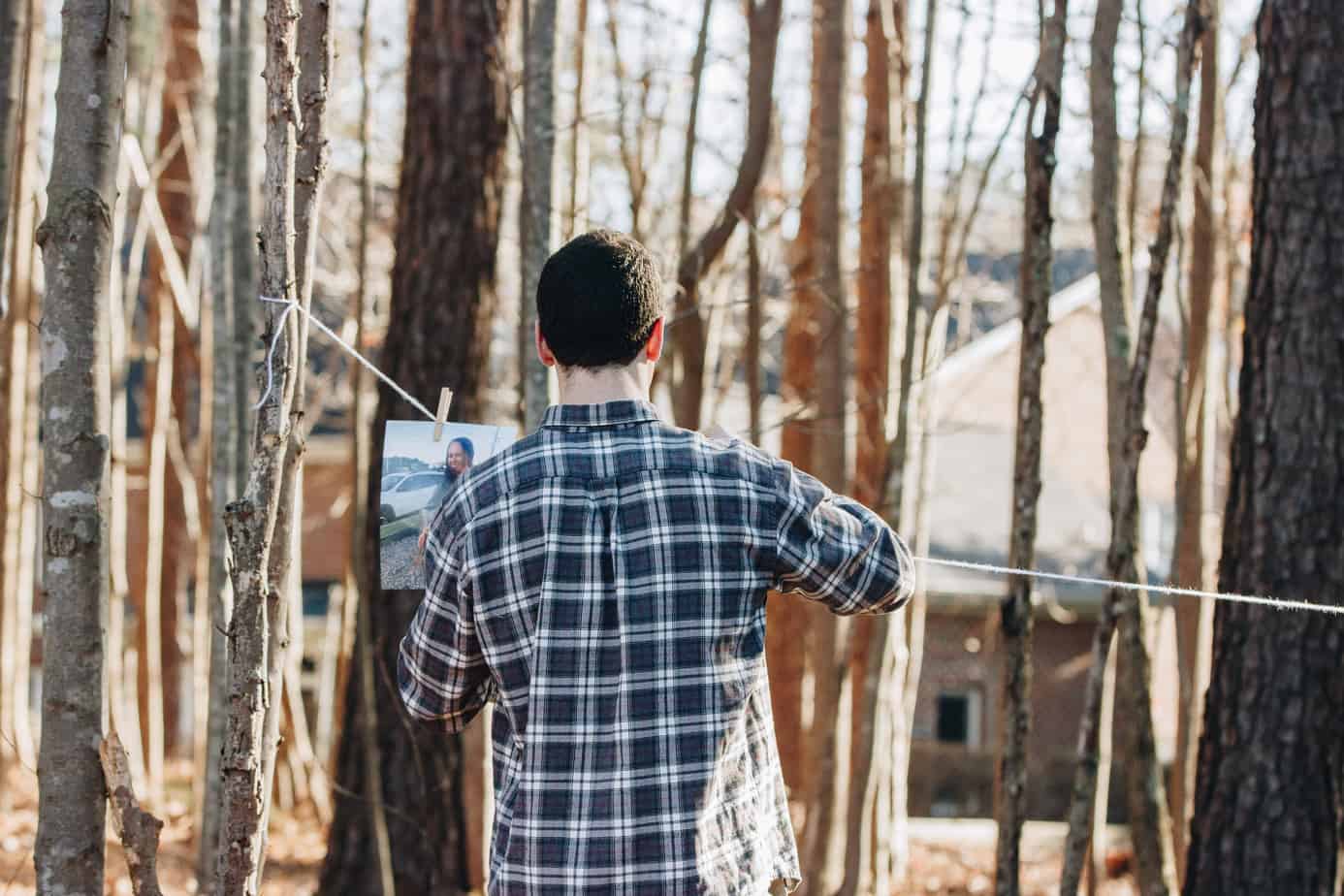 So, the plan was that we’d place pictures along the trail sometime early in the day on Thursday, and then Alex would ask Marissa to go for a walk that afternoon. They’d end up at the spot where all of the photos were, and I’d be somewhere nearby to take pictures. There’s a secluded footpath that veers off from the main greenway, which seemed perfect so there wouldn’t be people walking by while the proposal was going down.

Alex ordered the pictures at Walgreens and I picked them up a few days in advance. 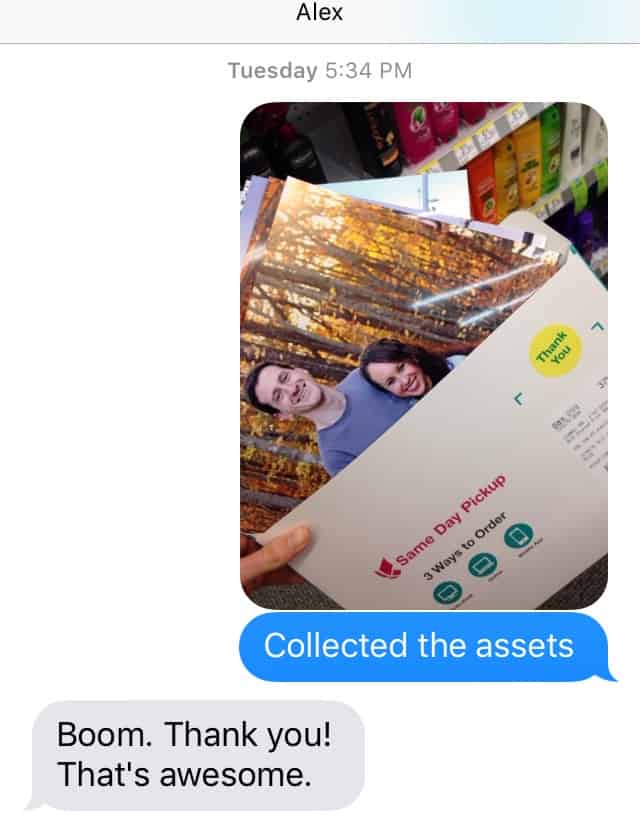 Marissa and Alex arrived in Raleigh on Wednesday night in time for dinner, and then Thursday was the proposal day!

On Thursday morning, Marissa and I woke up and went for a run first thing before she left to teach a group fitness class at our gym.

While she was at the gym, I drove to the airport to pick up our cousin, Sarah. We grew up in Atlanta across the street from our cousins, so Sarah is like a third sister to us. Last week, Sarah found an inexpensive flight to Raleigh from Atlanta. She told my mom and me about it, but we didn’t tell Marissa so it could be part of her day of surprises.

After Marissa got back from the gym and showered, I took her to get her nails done as part of an early Christmas present. Alex helped throw her off by asking how long a manicure lasts, and she said it’d last a week if she’s careful. He told her she should try to be careful then. 😉 So, she had no idea that the proposal would be happening later that day.

While we were picking out our nail polish colors at the salon with our backs to the door, Sarah walked in and grabbed Marissa in a big hug and Ris was so shocked. 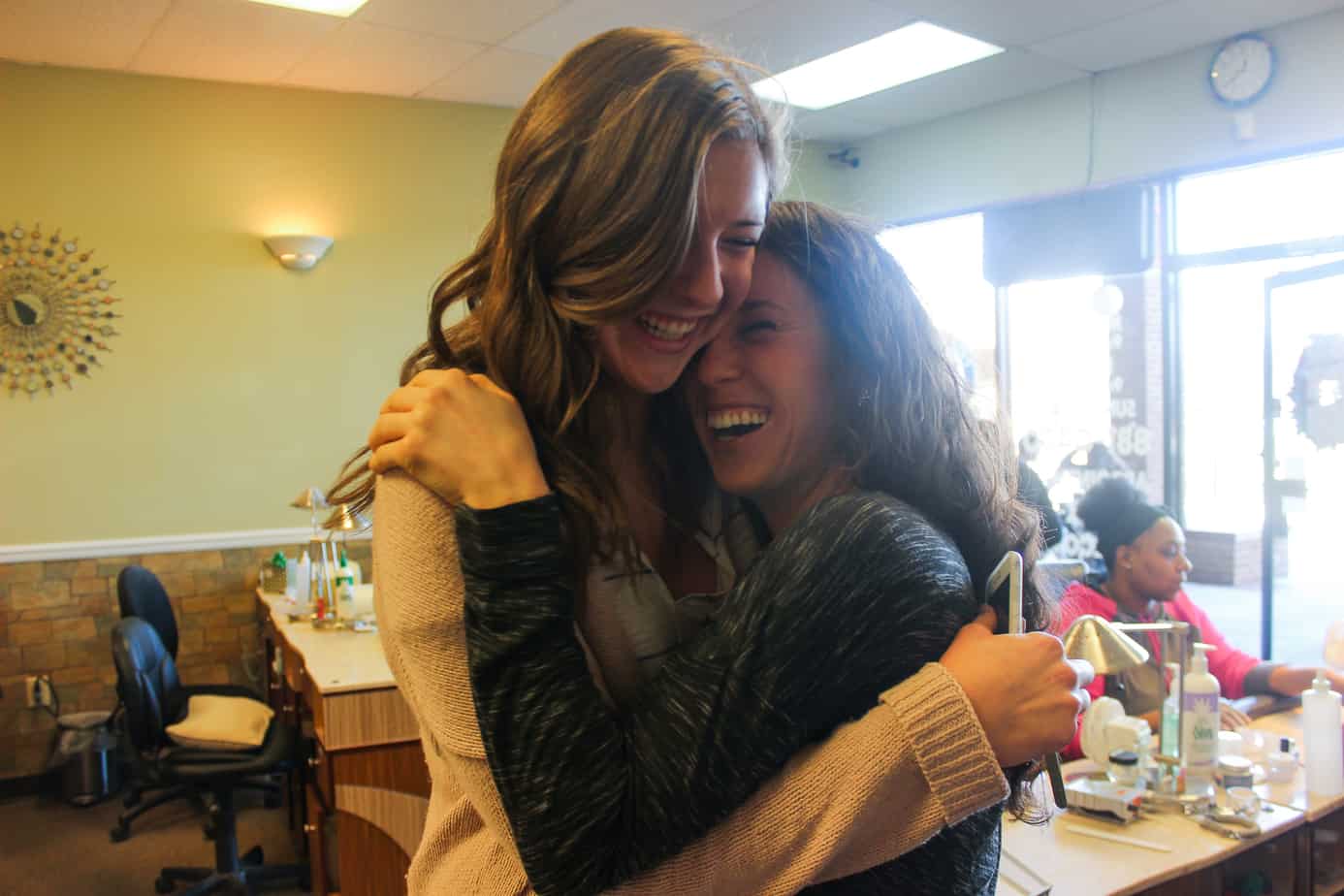 We almost never take time to get our nails done, so it was a fun treat and a perfect day for it (little did Marissa know….).

We headed home an hour later with pretty nails, and then Marissa left the house for another appointment. That’s when Alex, Sarah, and I headed to the greenway trail to set up the proposal. Sarah had the brilliant idea of stringing the pictures up with clothespins and clothesline, which ended up creating a pretty backdrop for pictures later on.

And Alex hid the ring box inside of one of his socks. 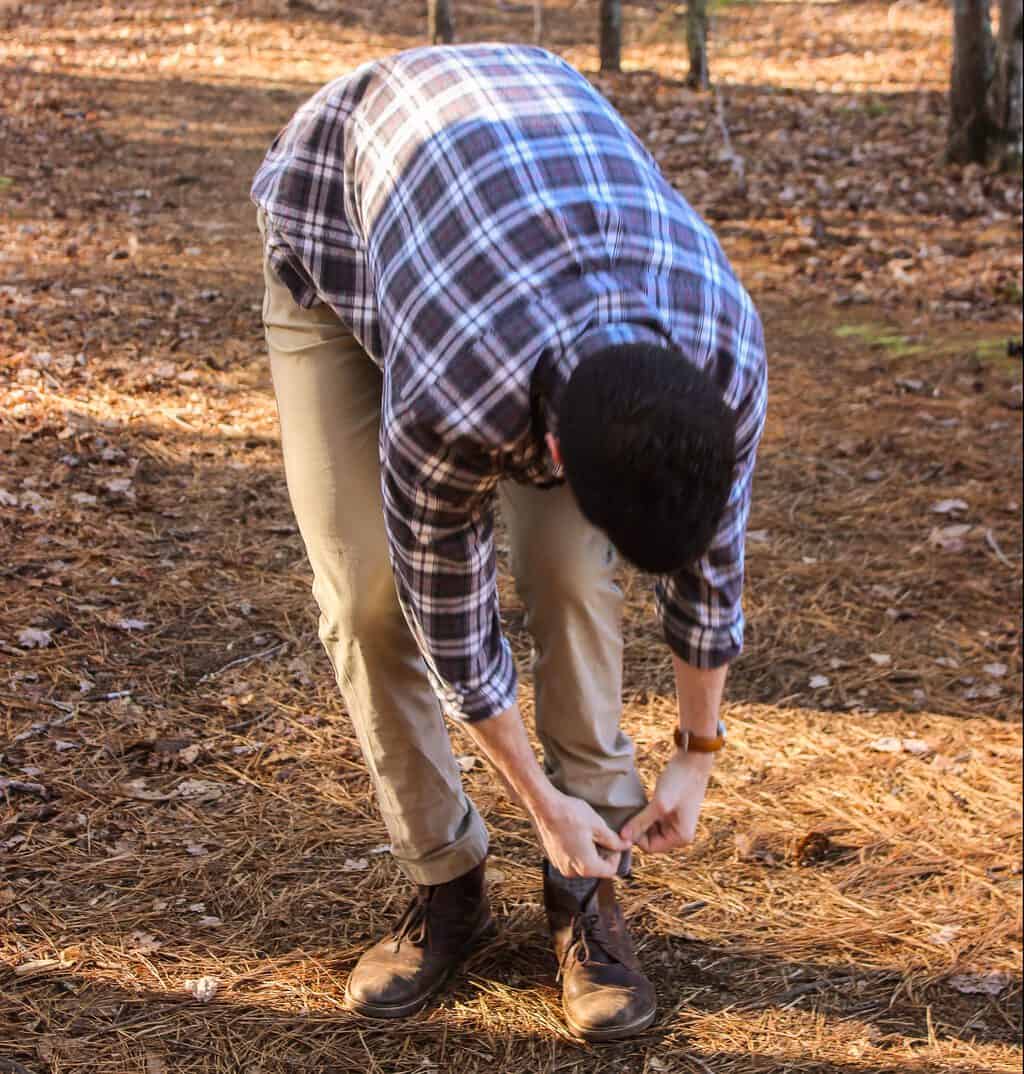 By the time Marissa got home, the three of us were back from the trail and were just sitting at the kitchen table chatting. Alex planned to ask Marissa to go for a walk when she got home. But Marissa actually beat him to it and happened to ask HIM to go on a walk with her that afternoon, so she really wasn’t expecting a thing.

Right before Marissa & Alex left for their walk, Sarah and I told Marissa we were heading to the grocery store, and we even asked my mom what we could pick up for her since she was totally in on the plan. My mom handed us a “grocery list,” and when we opened it in the car, this is what it said: 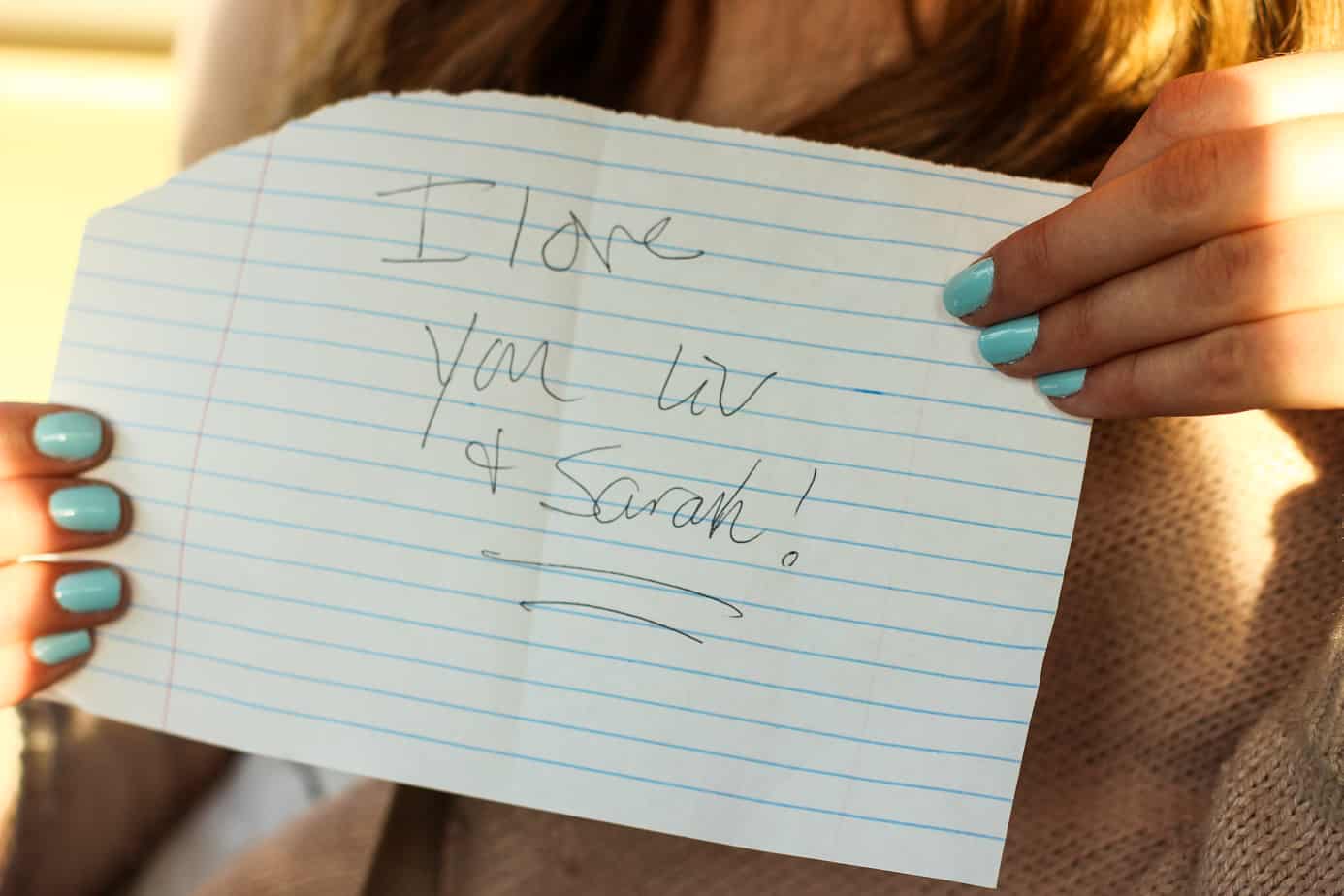 Instead of driving to the grocery store, Sarah and I hightailed it to the trail and took up our hiding spots behind trees. Having Sarah there was awesome because we could cover two different angles and capture both close-up and farther away pictures with our different lenses. 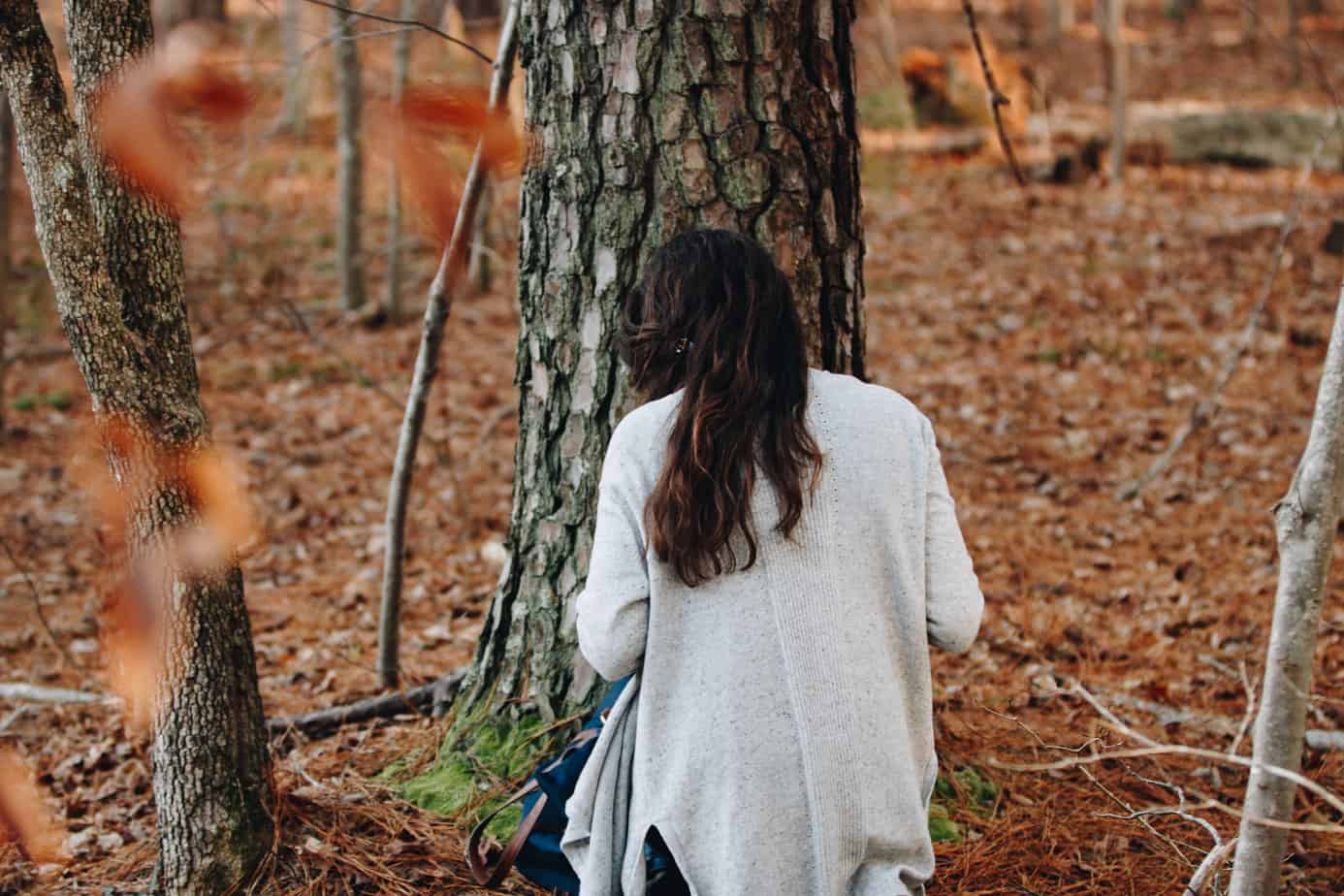 Just a few minutes later, we spotted Marissa, Alex, and Alex’s dog, Asher, walking down the greenway and turning onto the smaller footpath where the pictures were set up. 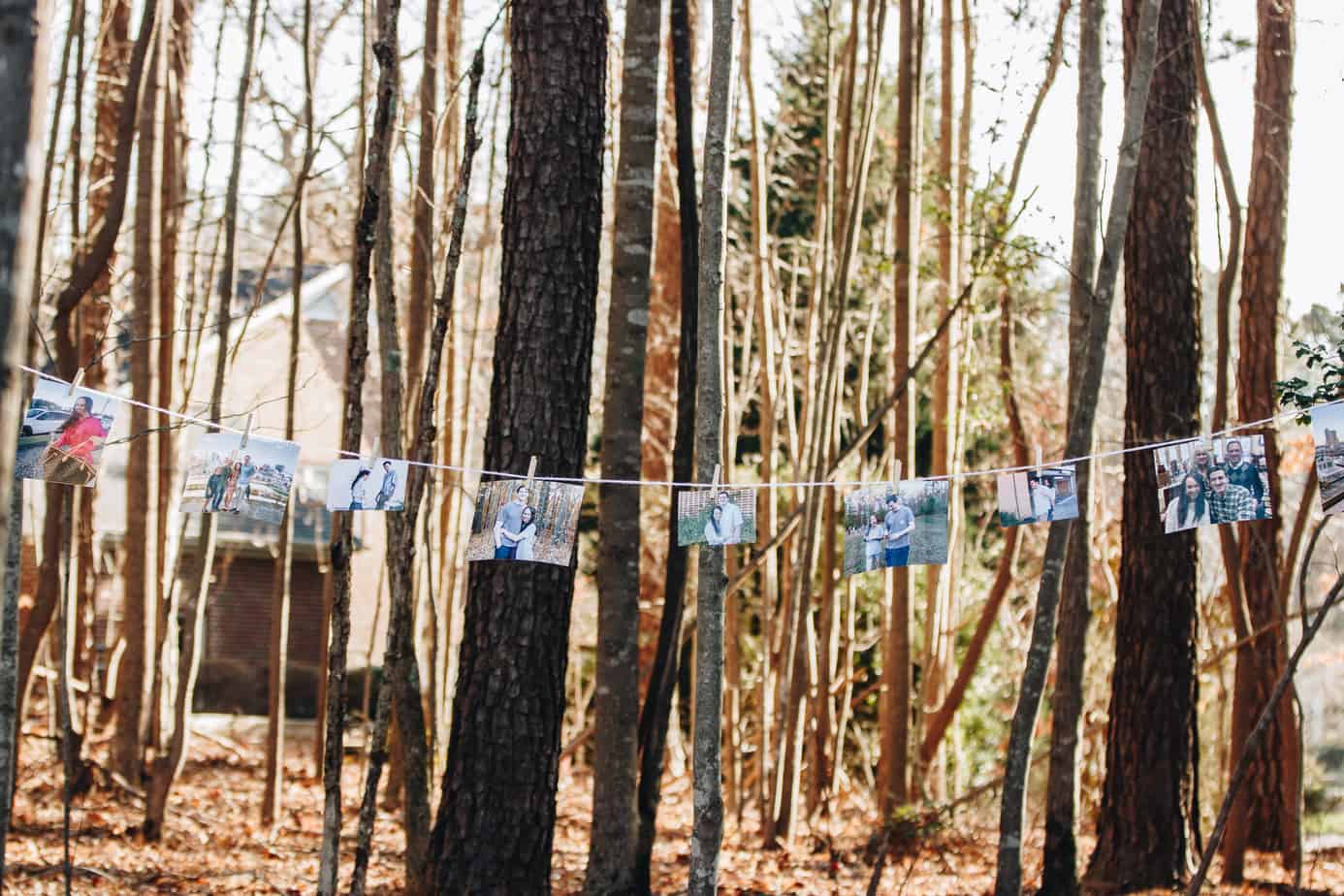 Afterwards, we asked Marissa what she thought when she saw rows of pictures and she said it honestly didn’t hit her that a proposal was coming. At first, she thought a family had hung up Christmas cards in their backyard- ha!

Marissa read the back of each picture and Sarah & I snapped pictures from our respective hiding spots behind trees. 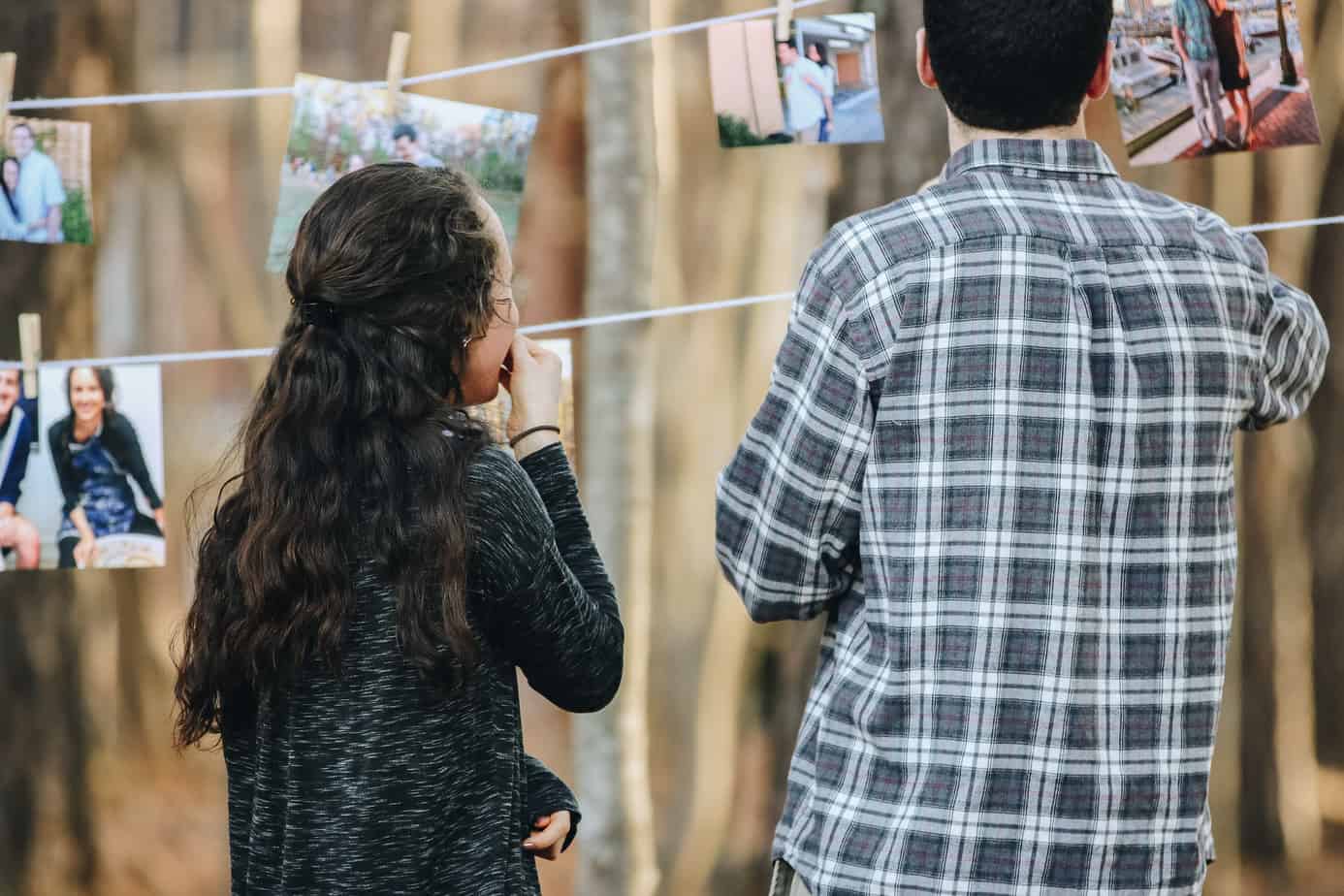 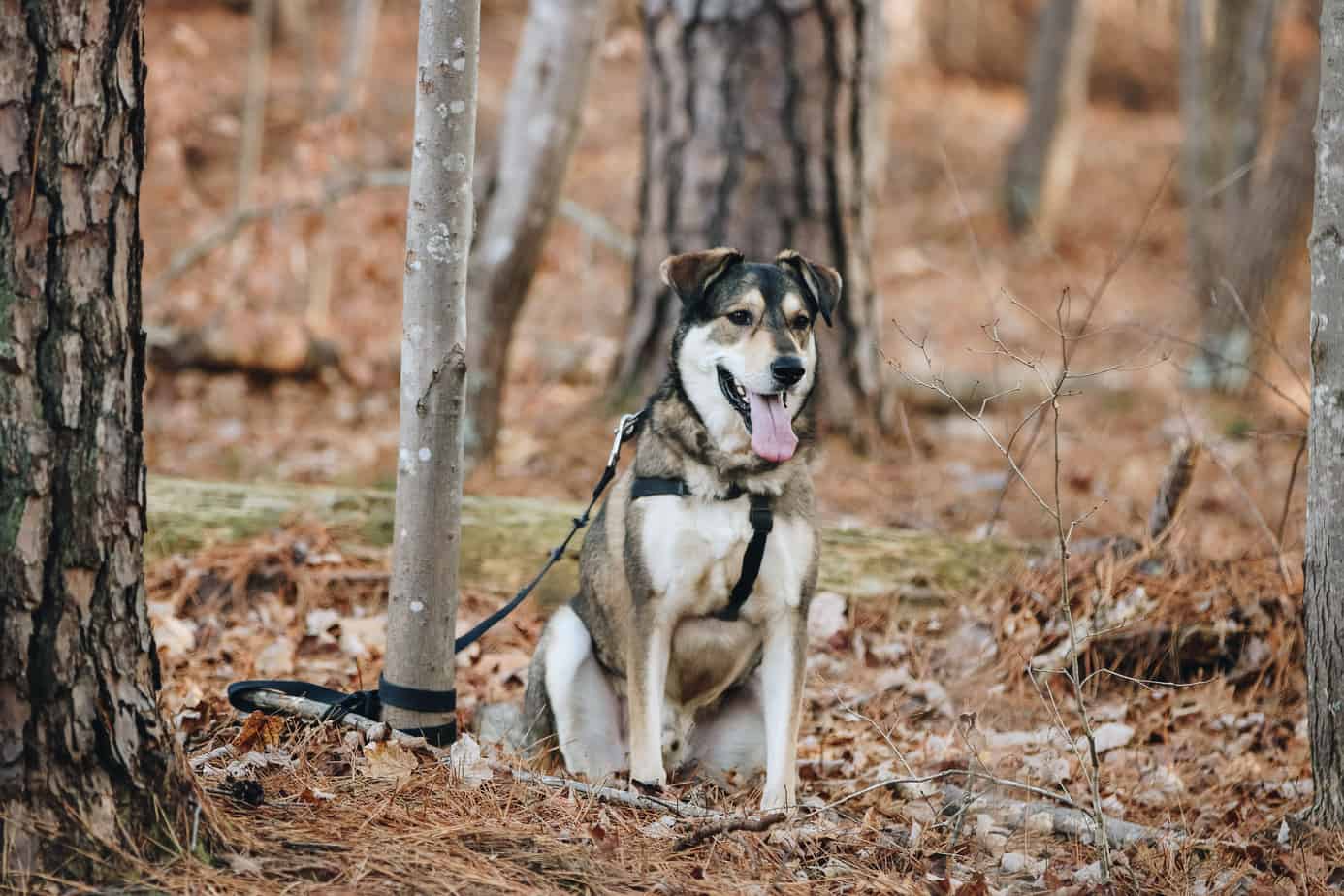 Then, Alex got down on one knee, smoothly pulled the ring box out of his sock (haha), and asked Marissa to marry him. She said yes! 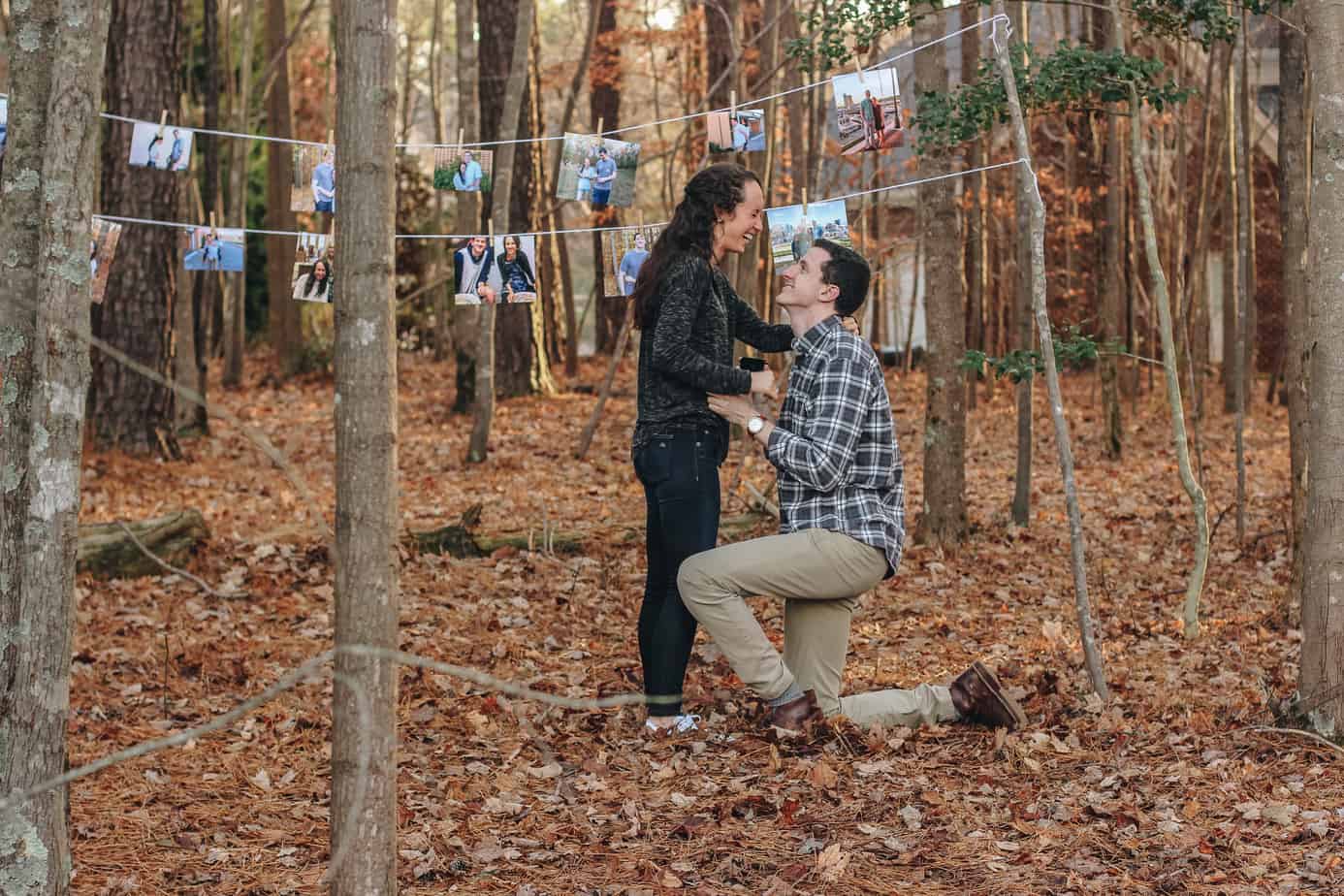 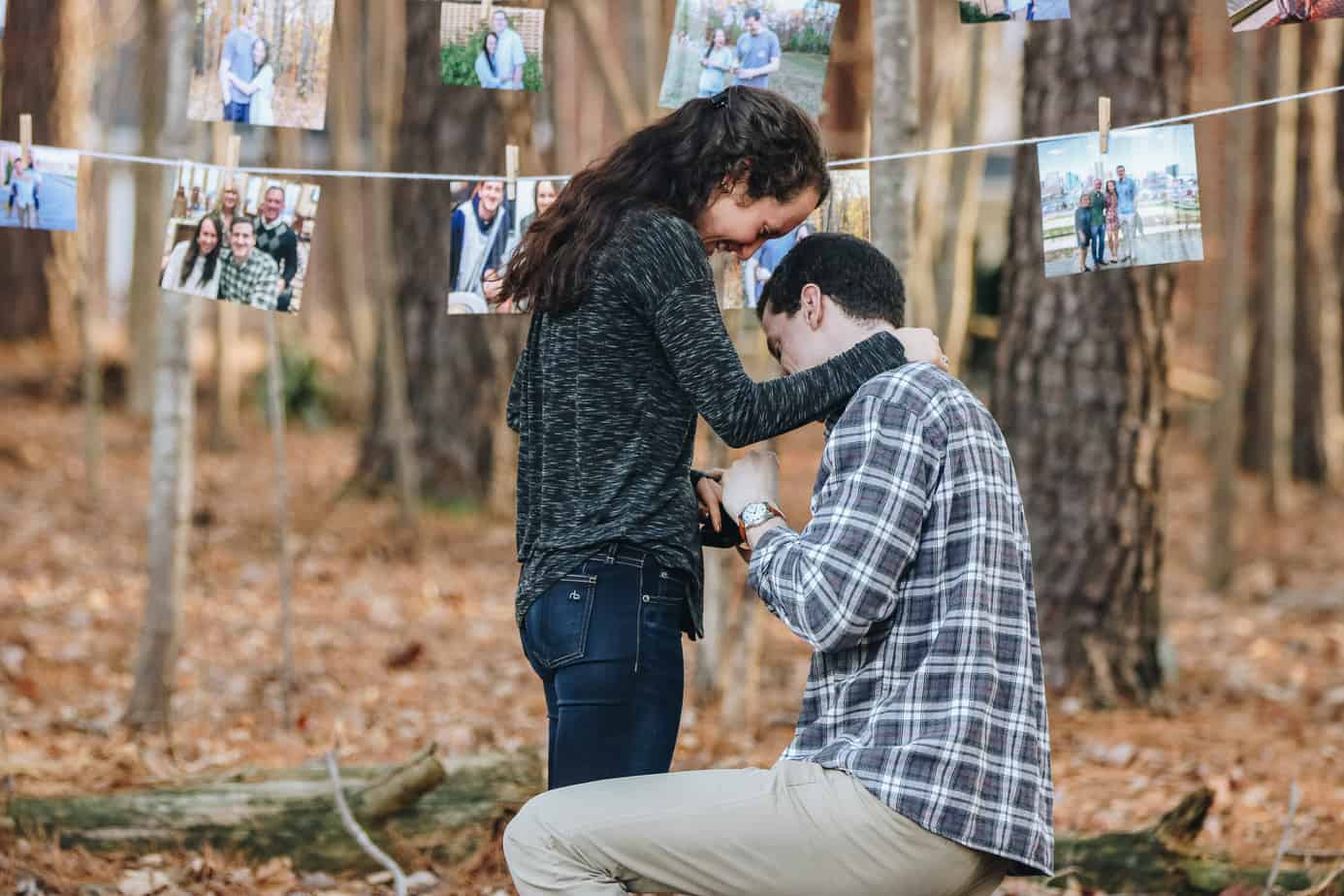 They were so excited and even though we were hidden, we honestly felt a little intrusive for being there for such a special moment (although it was really fun to watch!). But I’m so glad they’ll always have pictures to remember that day.

Afterwards, she turned around and spotted us when we peeked out from behind the trees. 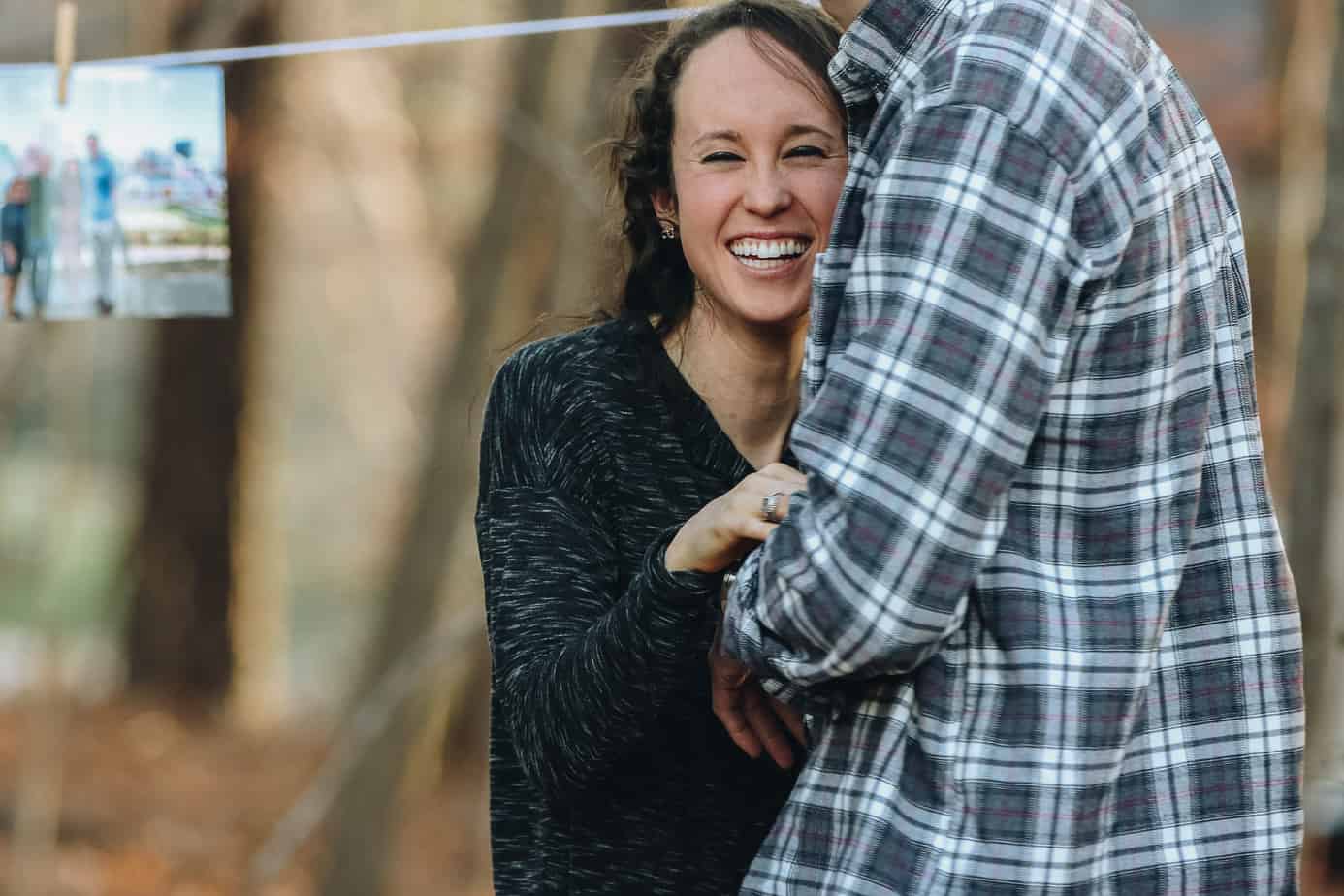 Sarah and I tackled her with big hugs before snapping a few pictures of us with her. 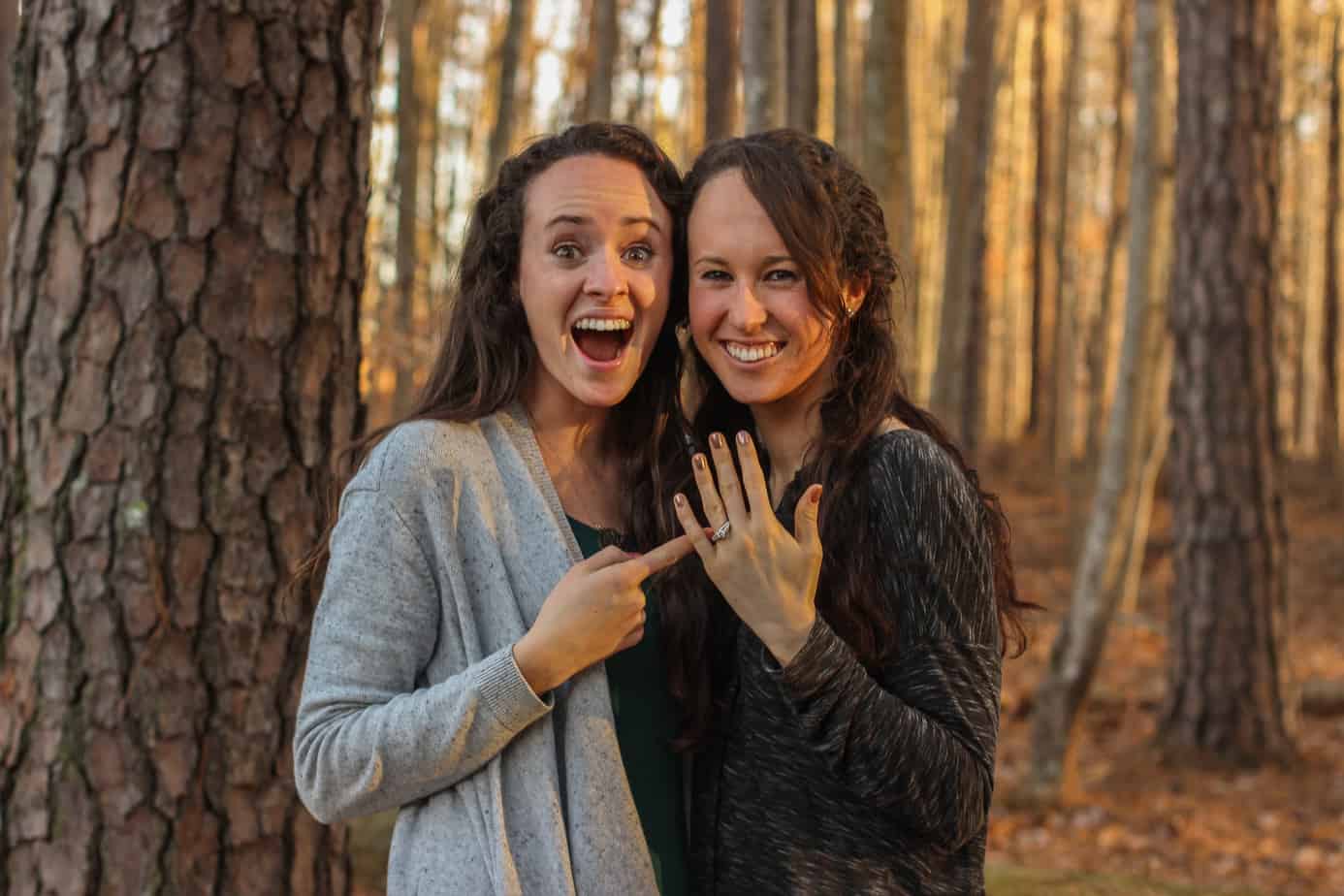 I texted the rest of the family once we started walking back because they planned to meet us on the greenway after. My mom said they needed five more minutes, so Sarah and I stalled by taking some more pictures. This ring…I love it! 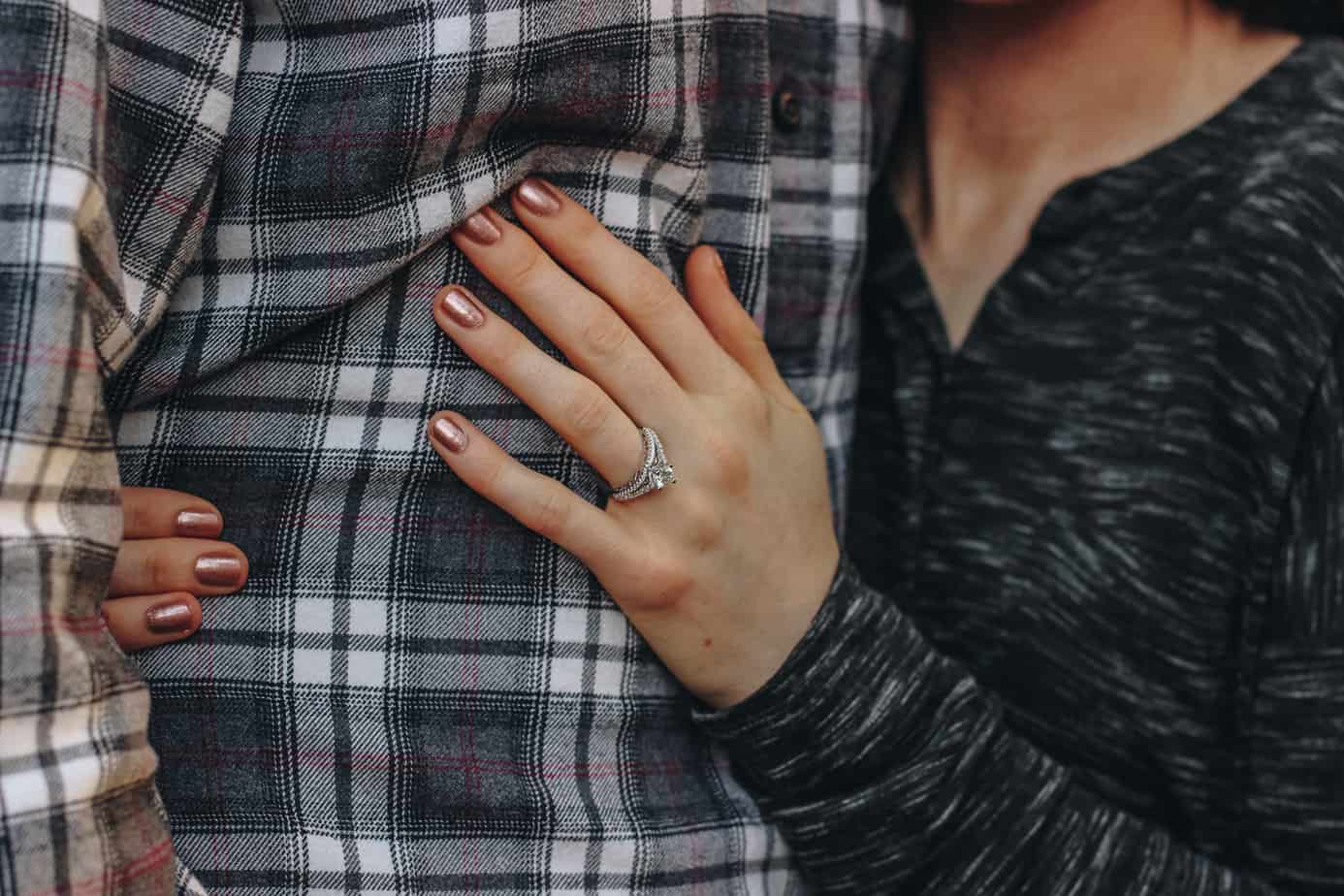 Pretty soon, we saw my family walking down the greenway towards us. Alex knew they were coming, but Marissa was surprised (again!) and there was a lot of excited talking, hugging, and ring-examining. 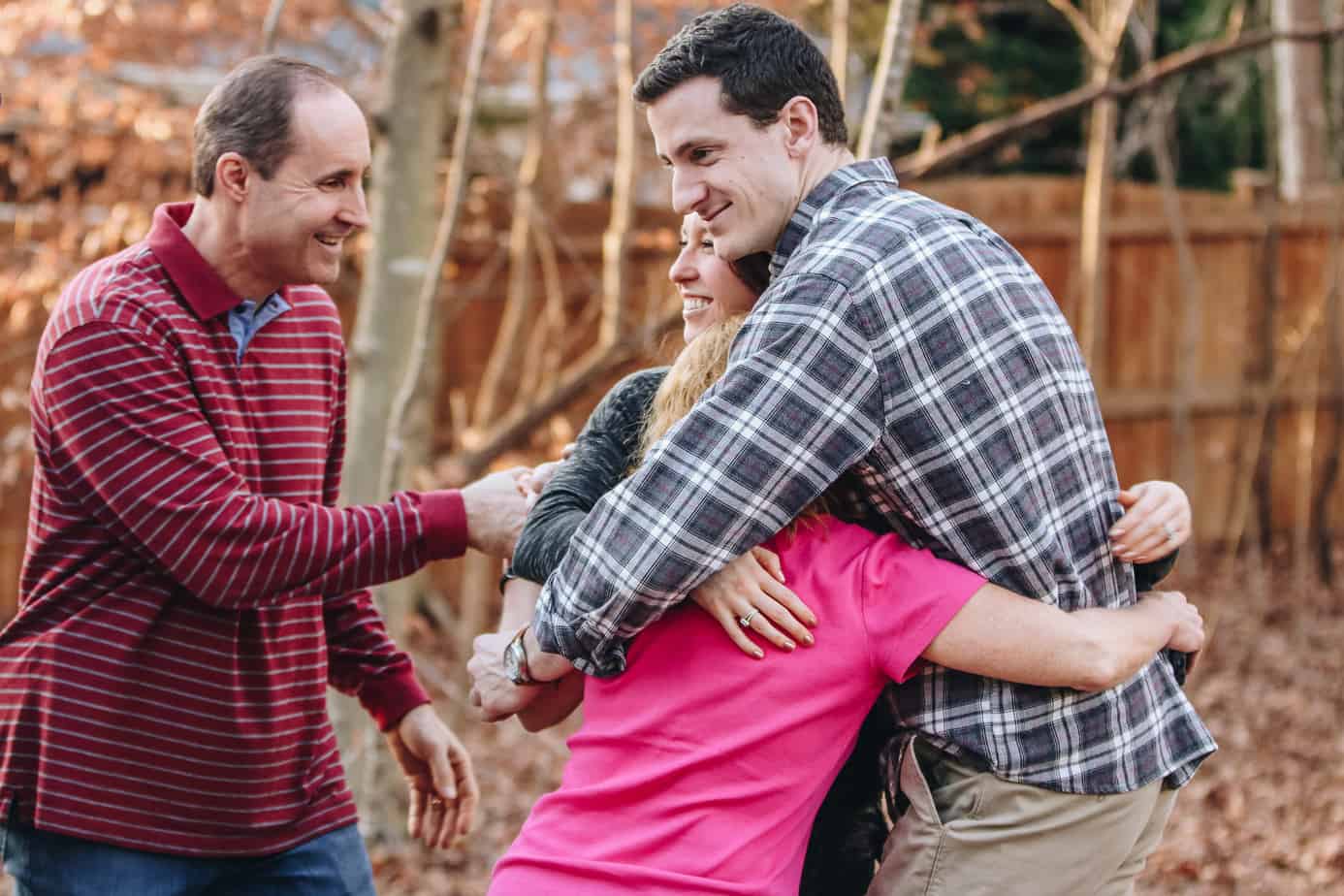 At this point, Alex’s face was starting to get tired from smiling so much, so we quickly snapped just a few more. 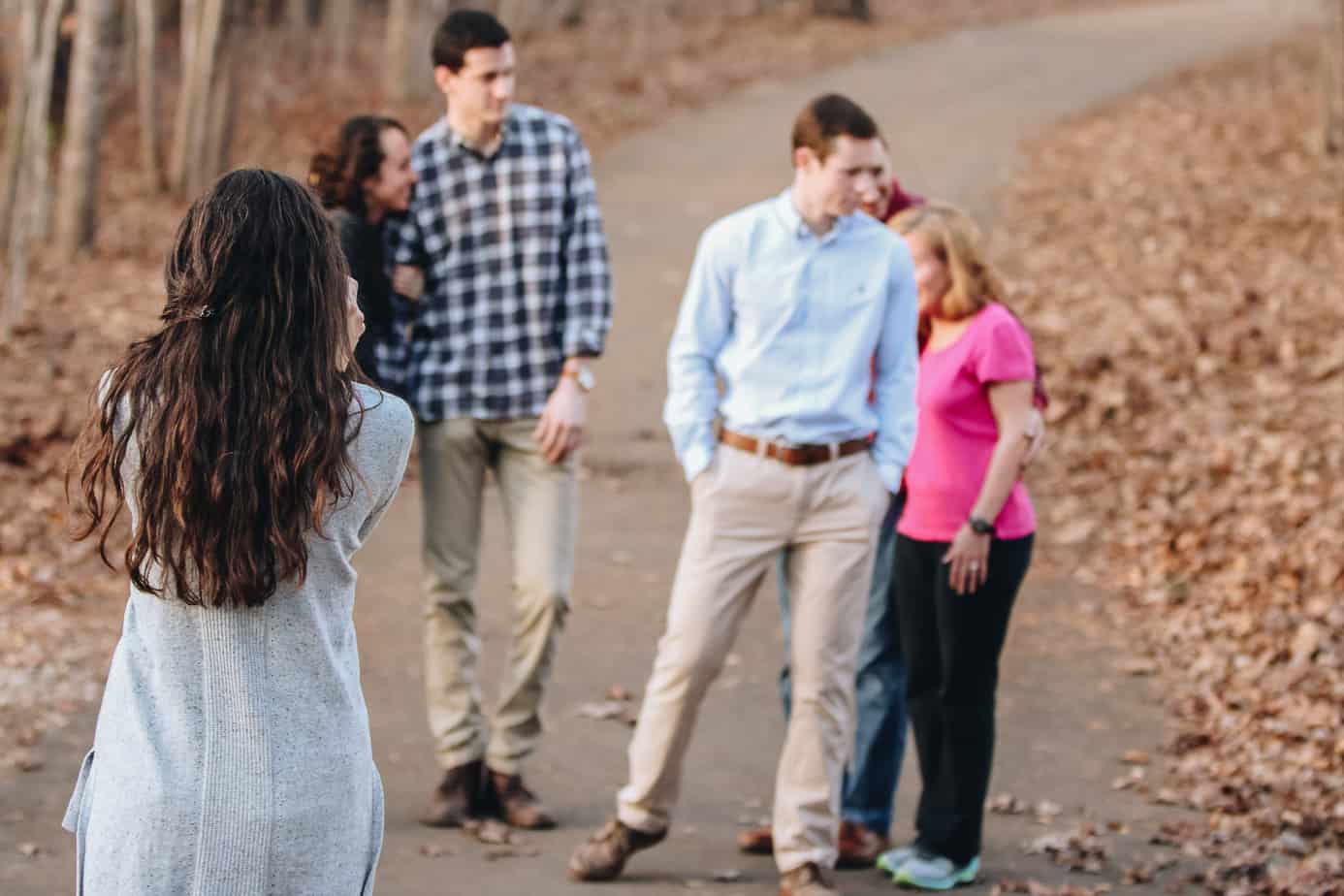 After having a friendly neighborhood walker take a picture of the whole family, we headed back home for one last surprise…a mini engagement party. 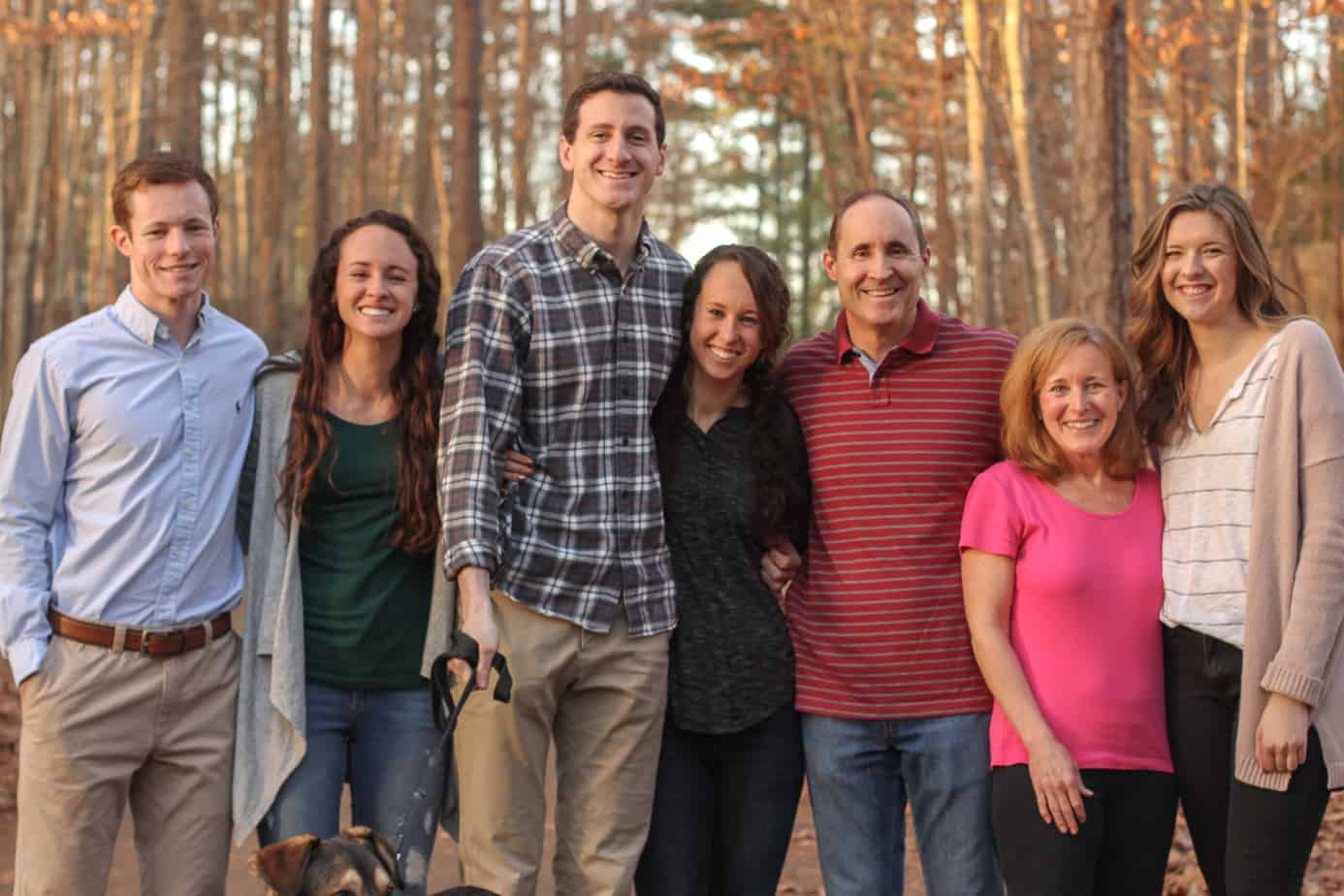 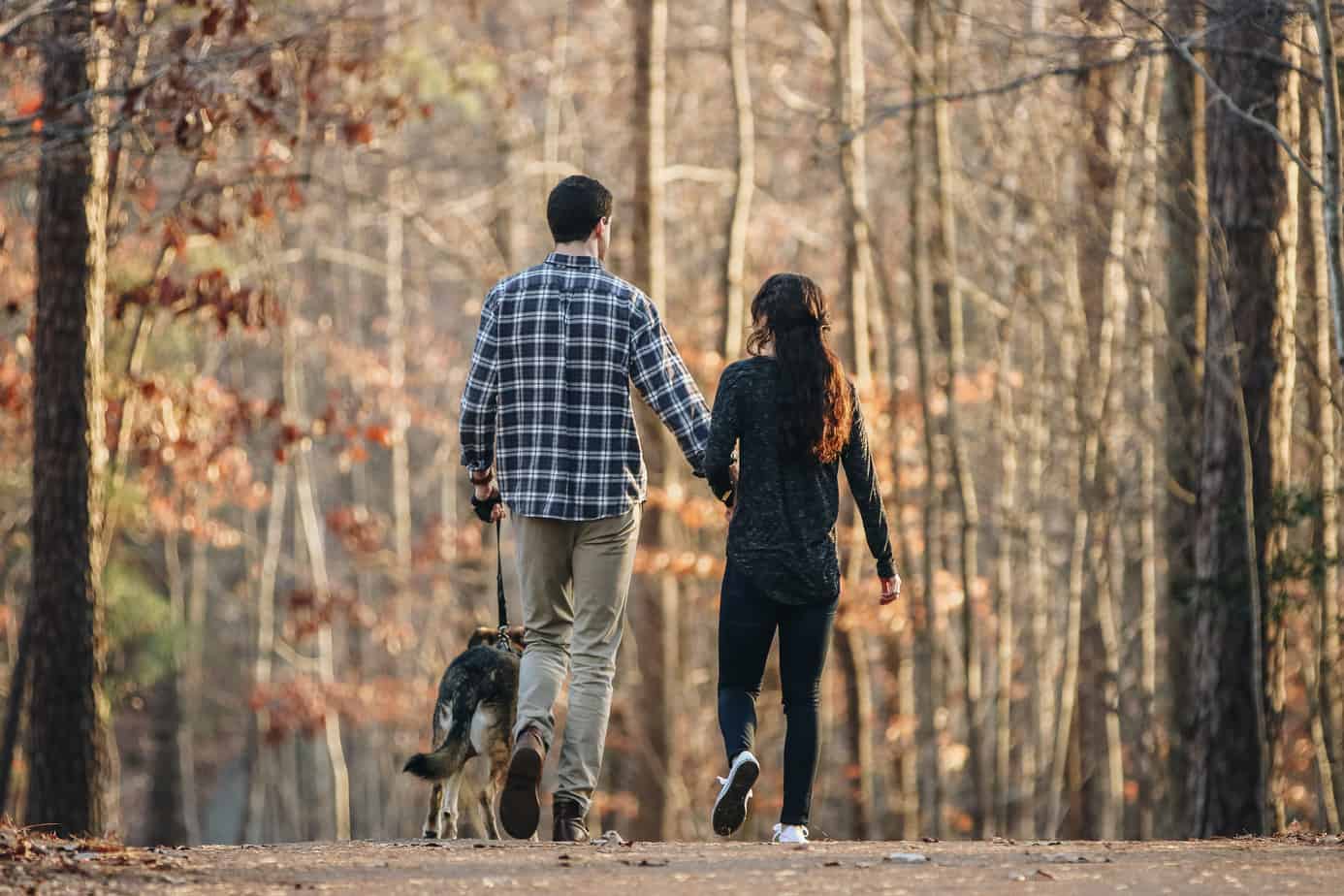 My super talented cousin, whom we’re all currently trying to convince to set up an Etsy shop, made this gorgeous sign by hand. 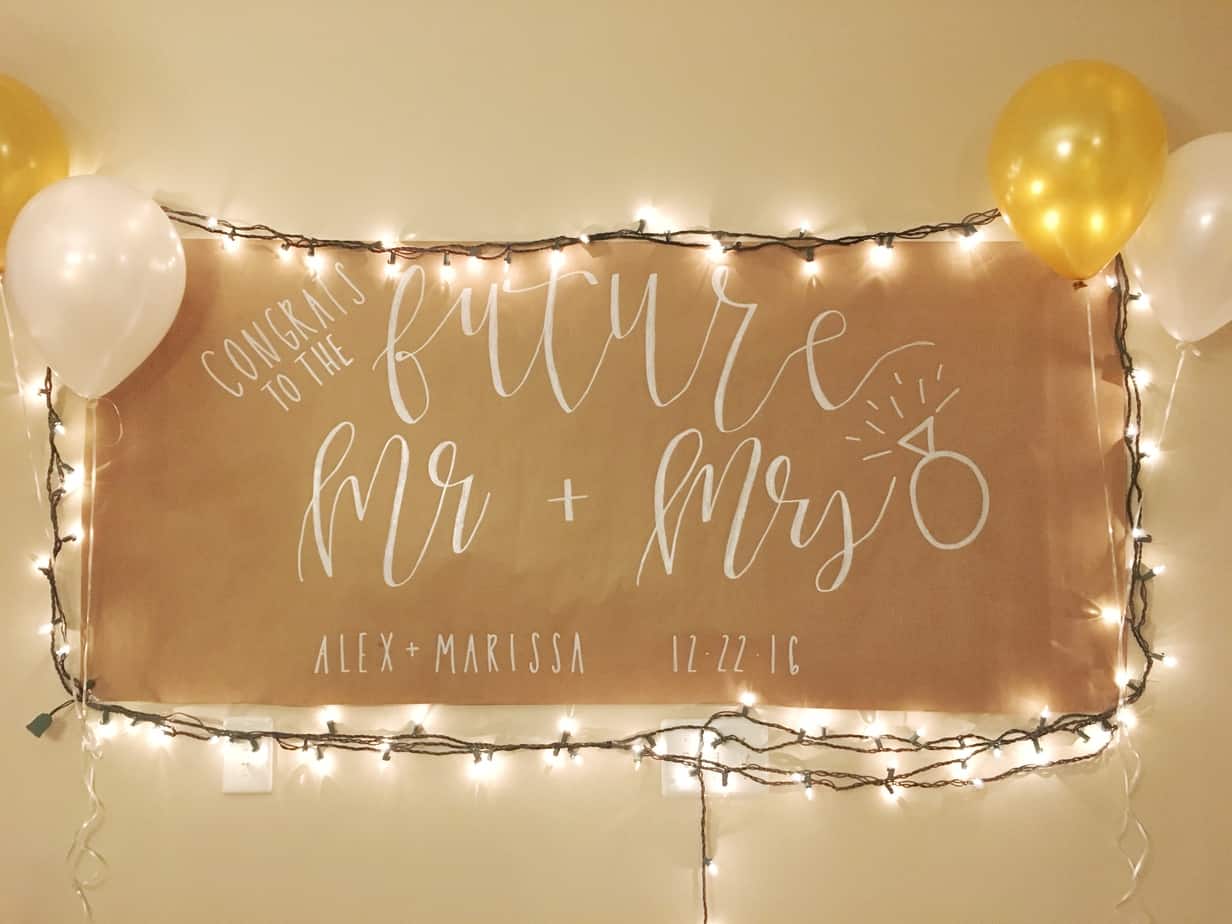 And since it would’ve raised Marissa’s suspicions if we’d baked a cake that afternoon, my mom ordered a celebratory chocolate “mud cake” from Whole Foods, which was so, so good. 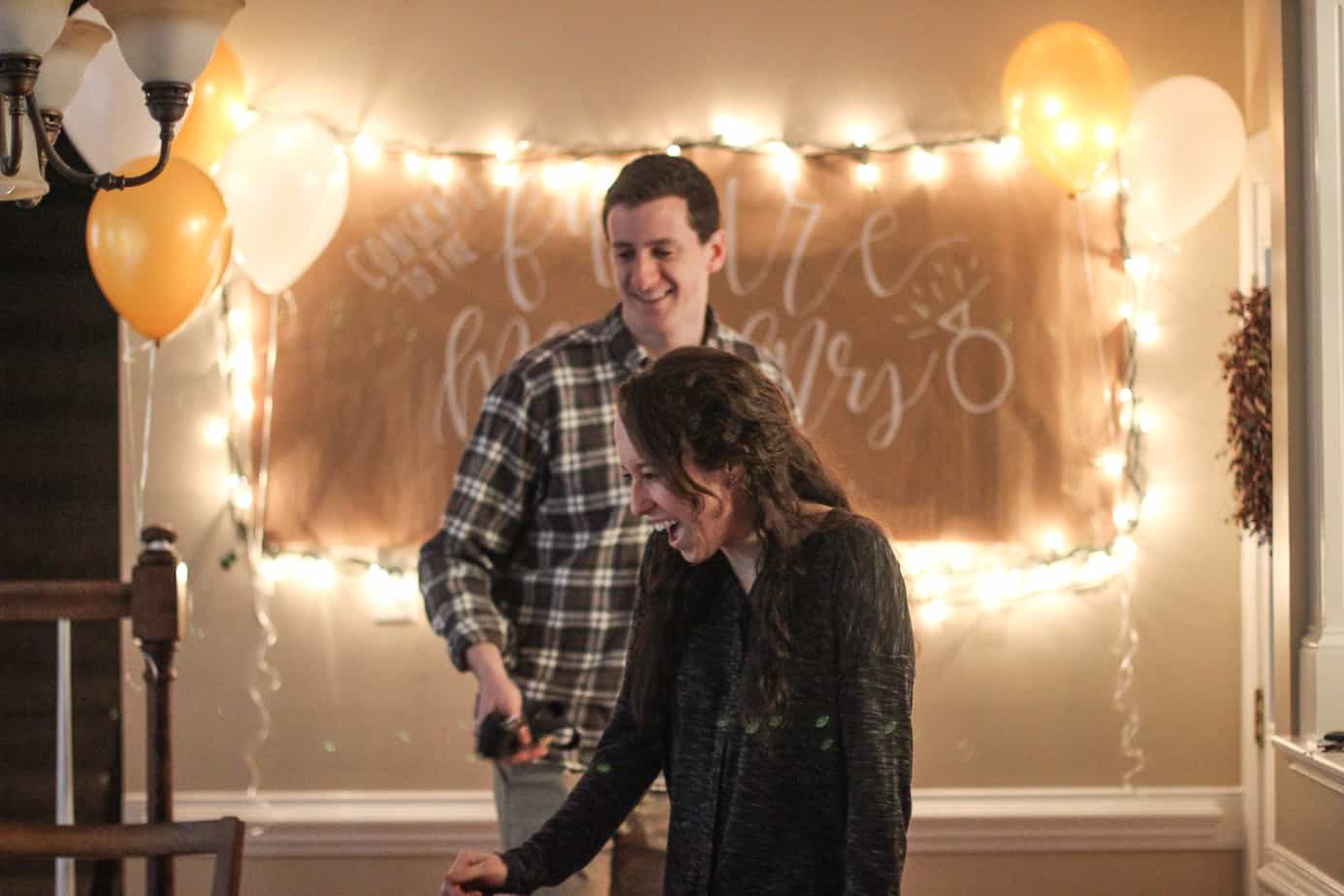 It may look like a generic chocolate cake, but it was so not. Pretty sure I ate a piece every day for the next four days straight (just to keep celebrating Marissa and Alex, of course). 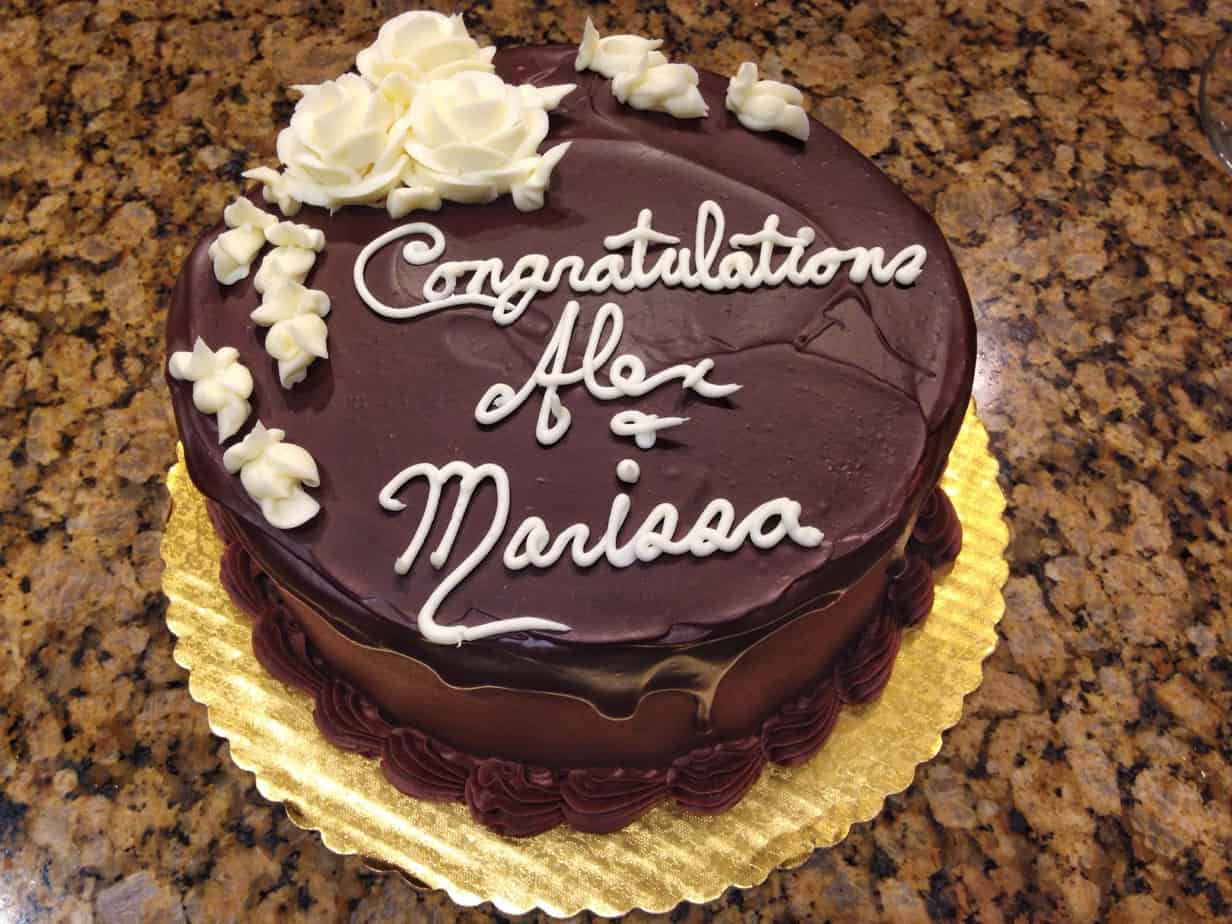 That night, after dinner, Marissa asked Sarah to be a bridesmaid and asked me to be her maid of honor with these cute earrings. Since she knew the proposal was in the near future, she’d planned ahead and already bought them. 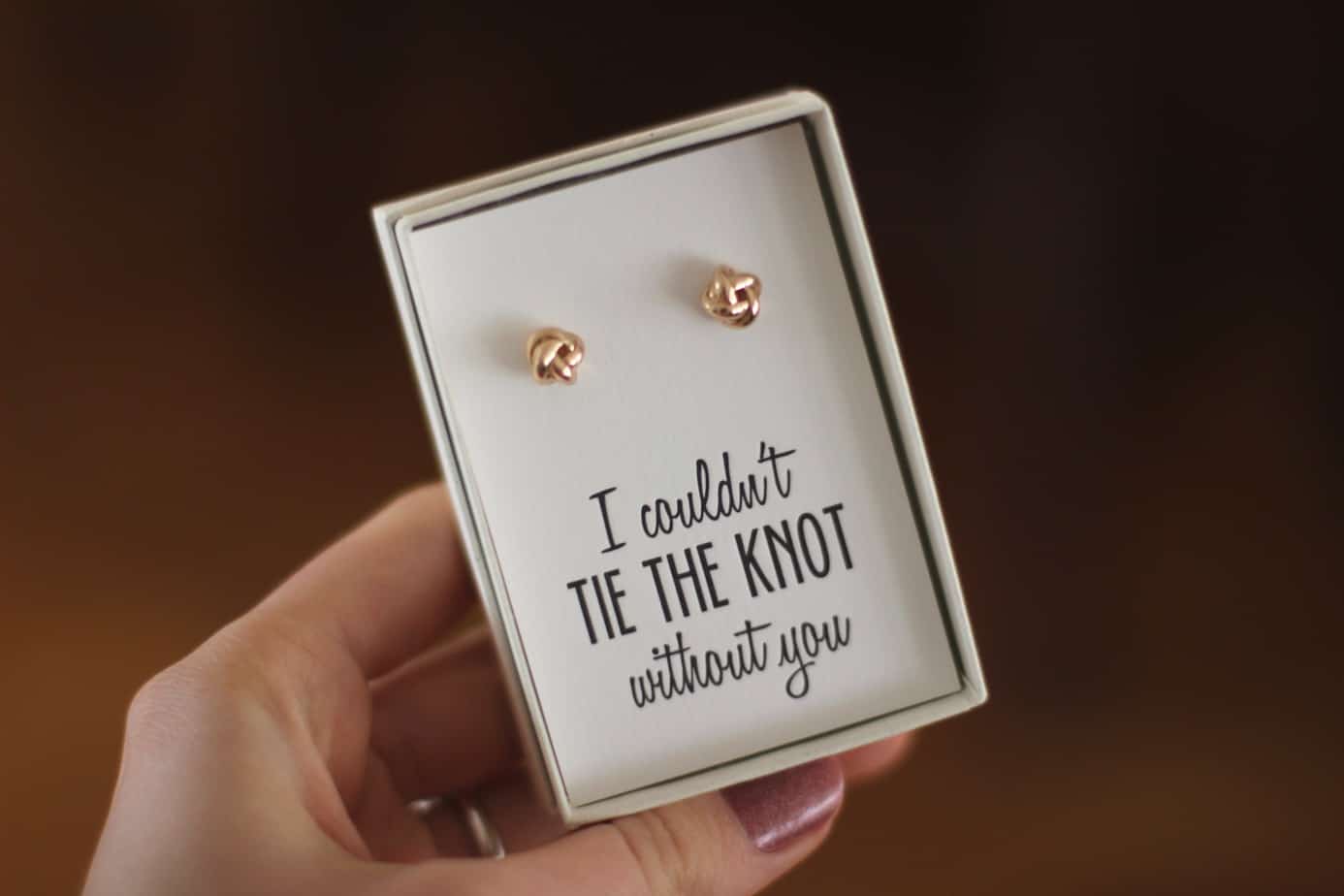 Of course, we said yes. I’m really, really happy for Ris and Alex and was so happy to be involved with the proposal. And now…on to wedding planning!

So tell me…
Have you been part of any proposals or weddings?
What do you think your “dream proposal” would be like?