This healthy apple crisp is loaded with cinnamon apples and sweet crumbly topping. It’s free of refined sugar (and has just a touch of maple syrup, although you can sub honey), but you’d never know it. Serve with vanilla ice cream for pure bliss! 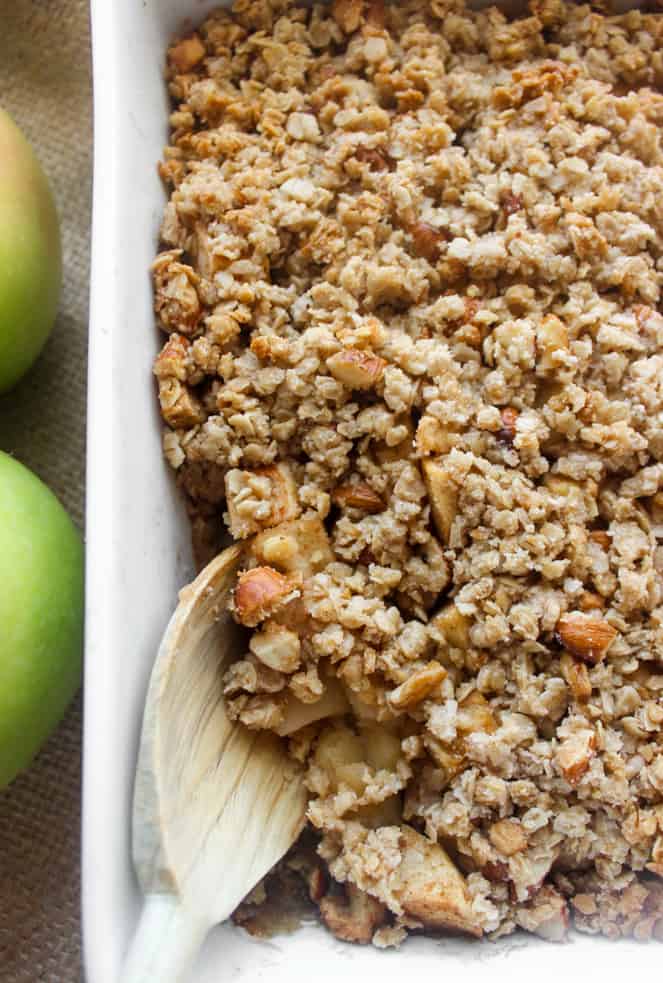 I’m a bit skeptical of “healthy” dessert recipes that call for fat-free everything, sugar-free everything. I try to cook and bake with mostly natural, whole ingredients and use as little refined sugar as possible.

So, this healthy apple crisp has all real, whole ingredients like oats, almond flour, nuts, cinnamon, coconut oil, and pure maple syrup (or honey), and it’s by far the best healthy dessert I’ve ever had. It’s free of refined sugar, so the only sweetener is just a tiny bit of maple syrup, plus the natural sweetness of the apples. 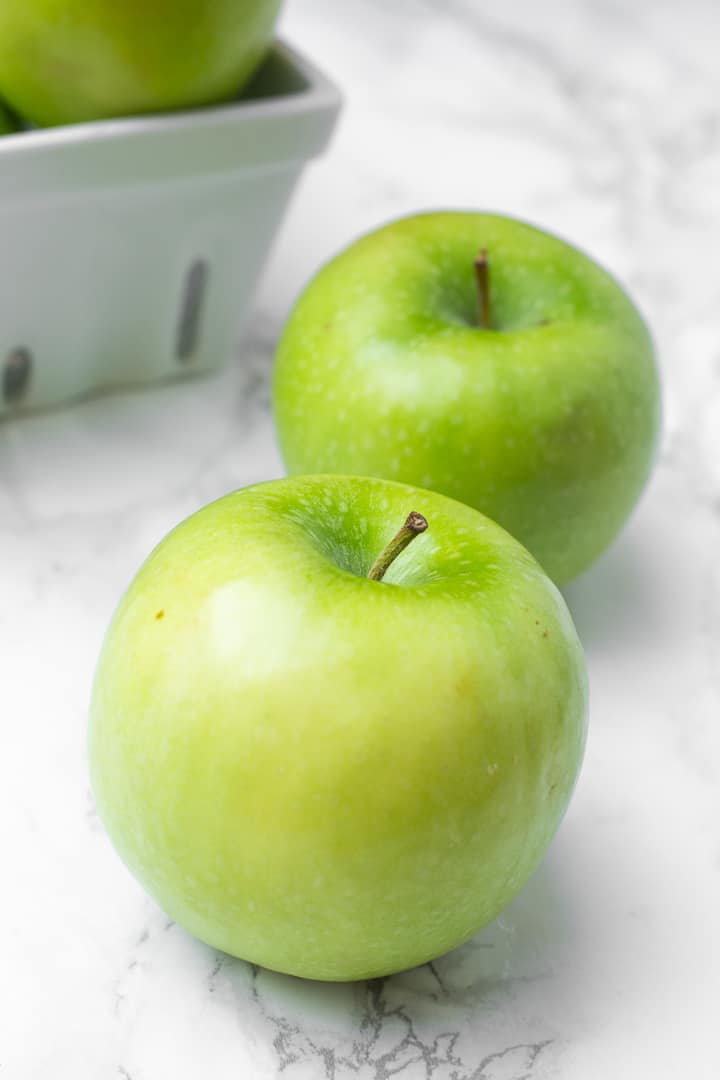 I used my favorite Granny Smith apples, which are awesome for baking since they’re relatively firm, so they hold up well during baking and don’t turn to mush. They’re also tart, which adds a nice contrast to the sweetness of the crumble topping and the ice cream.

Honeycrisp, Jonagold, Cortland, Braeburn, and Pink Lady apples are also great choices for baking in a recipe like this.

Although I usually don’t buy single-use kitchen gadgets, this all-in-one apple peeler/corer is more than worth the cost and very small amount of space it takes up. It makes the apple prep process so quick! 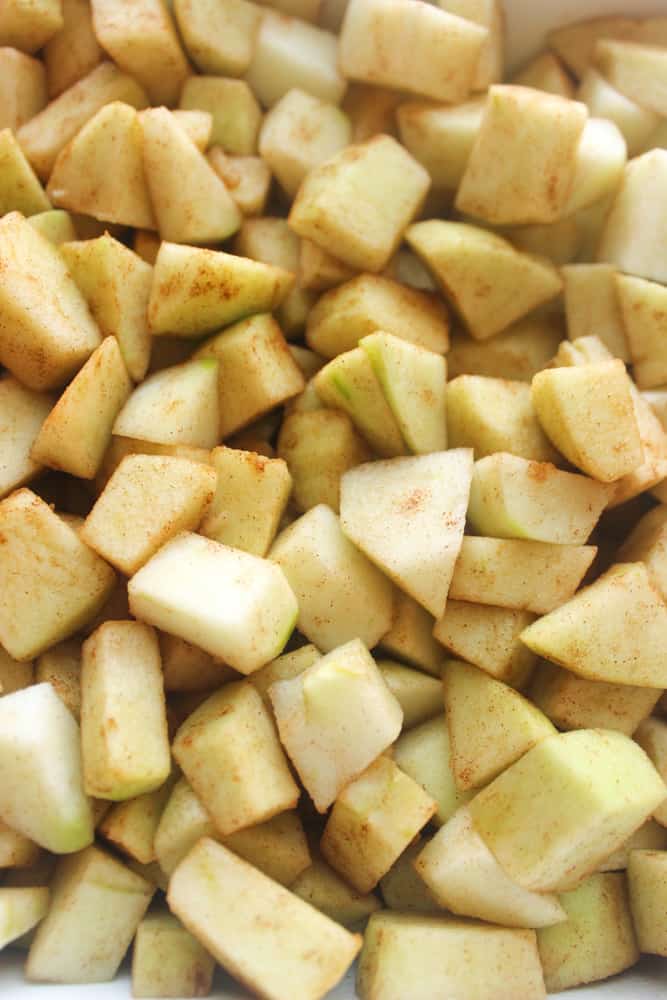 This apple crisp just so happens to be gluten-free since I used almond flour, instead of wheat flour. Almond flour is frequently used in Paleo and gluten-free baking, and I love that it just tastes like almonds since it’s ground from whole blanched almonds. Plus, it adds some protein and healthy fats.

The almond flour was the only ingredient I didn’t already have in my dorm room, but fortunately, it’s pretty inexpensive and it’s easy to find at the grocery store. 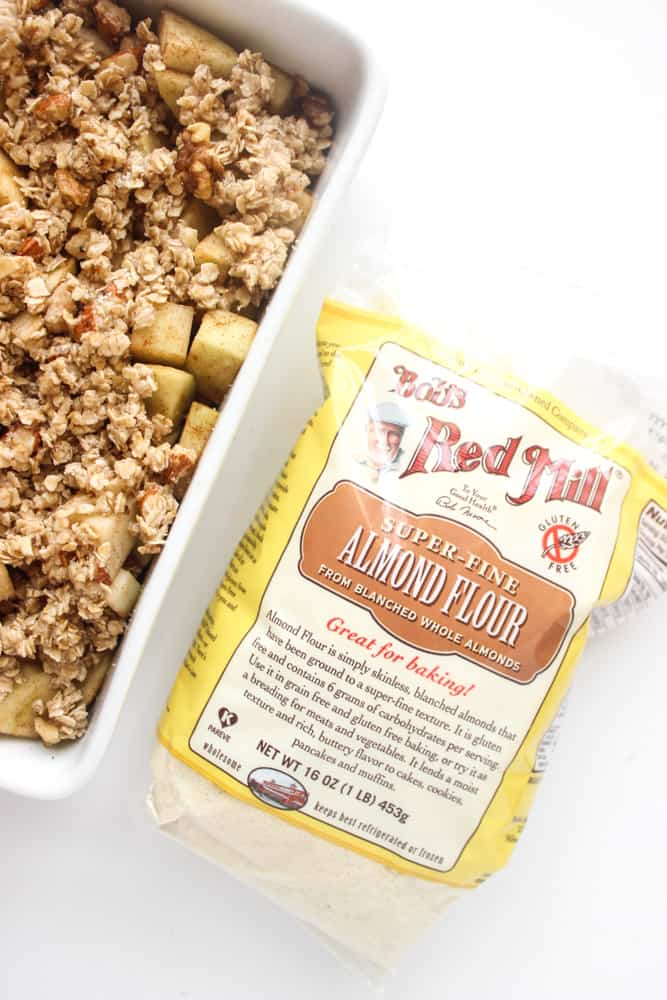 But back to the dessert. Did I mention this apple crisp is naturally vegan? That is, until you add that big scoop of ice cream on top, which I highly recommend.

There are lots of great, all-natural vanilla ice cream brands out there and I went with Turkey Hill’s Natural Vanilla Bean with just five ingredients (cream, milk, sugar, vanilla, vanilla bean). For any vegan or dairy-free friends, you could top this apple crisp with your favorite non-dairy ice cream. 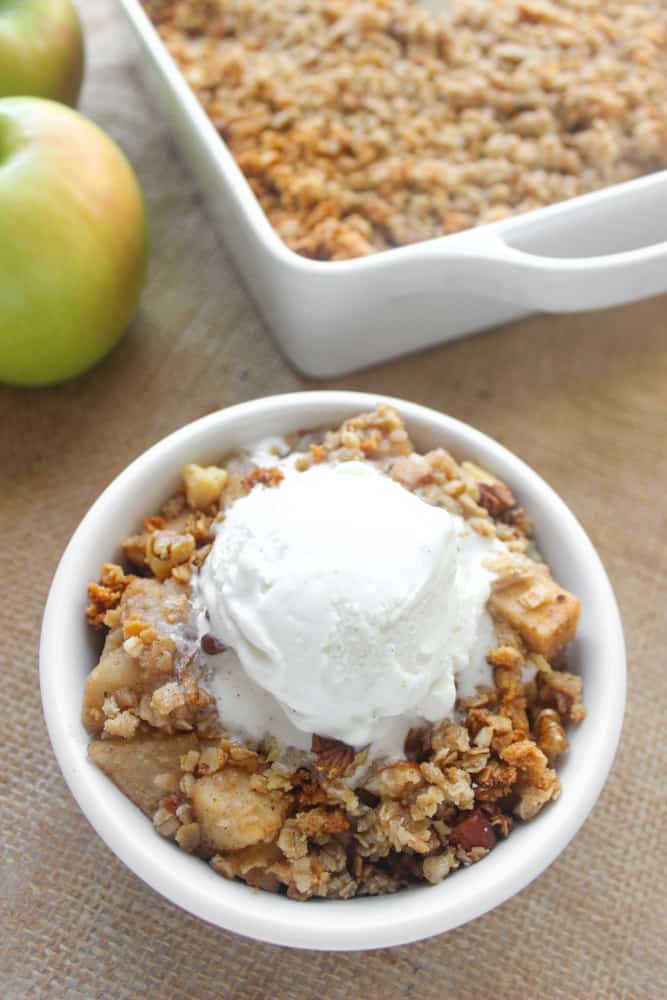 Due to my grandpa’s extreme love for apple crisp, I’ve tested quite a few recipes over the years. His birthday falls either on or near Thanksgiving every year, so I always make one for his birthday/Thanksgiving and Christmas visits, plus any other times I see him throughout the year. 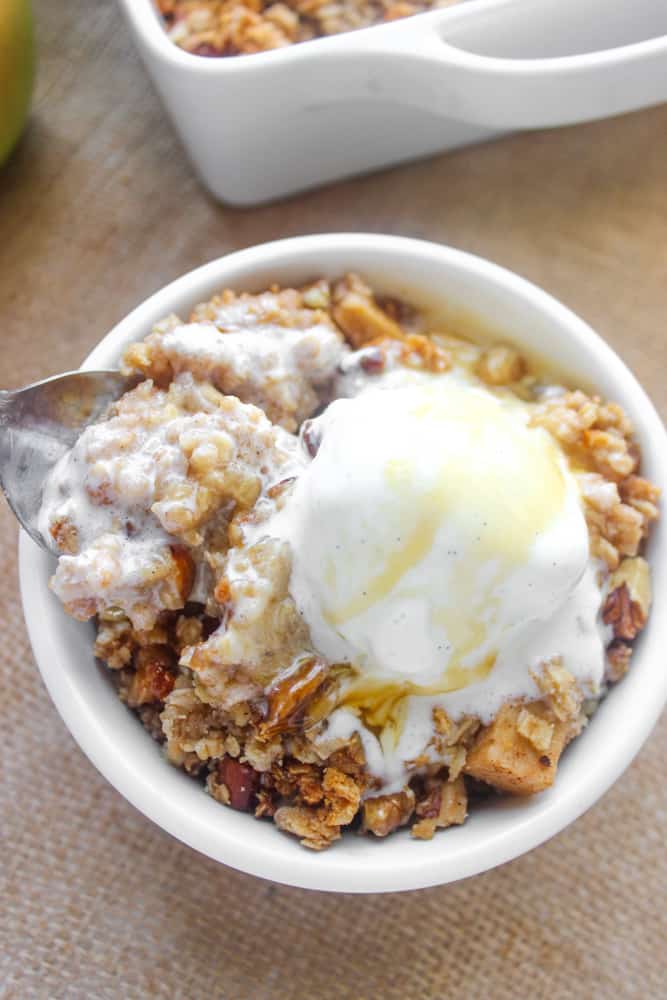 I even made this dessert in my dorm and then invited a couple of friends over for dessert on two different nights and they all gave it an enthusiastic two-thumbs up.

I can’t wait to have my grandpa taste-test this apple crisp in just a few short weeks for Thanksgiving! Move over, apple pie. There’s a newcomer at the Thanksgiving dessert table– apple crisp with the BEST crumble topping. 🙂

If you try out this healthy apple crisp, feel free to let me know in a comment or take a picture and tag me @livbane on Instagram. Hope you enjoy! 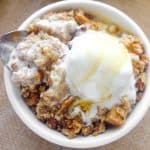 For the Crumble Topping

6 medium or large apples is equivalent to about 2 - 2 1/2 pounds of apples. Things I Used: organic cinnamon, organic coconut oil (great value!), and apple corer/slicer. I have this handy dandy apple peeler/corer/slicer that's a total game changer when it comes to apple desserts. It easily cuts the apple prep down to 5-10 minutes max, and all of the pieces are a uniform size for even baking. LOVE this thing.

Topping adapted from this recipe

October Highlights
6 Easy Tips for Cooking for One