You are here: Home / College / What Happens When You Don’t Get Enough Sleep?

Over the past couple weeks, I’ve noticed that I’ve been feeling more sluggish and having less energy than normal. When I’m running, my legs have felt heavier and my natural feel-good pace has gotten slower. I was talking about this recent change with my running friends, and I realized that the only thing that’s changed is that I’ve been getting fewer hours of glorious Zzzzzzs than normal.

I consistently get 6-7 hours of sleep per night but I’m coming to the realization that for me, it’s not enough. I don’t take naps and I typically don’t drink caffeine (unless coffee ice cream counts– I’m all over that), and I can usually power through the tiredness…but I think I need more sleep to be able to run and function the best.

Obviously, we all know that sleep is important, but I was curious about what exactly happens when you don’t get enough sleep, because sometimes there are just too many fun things going on to sleep enough hours at night. So, I did a little “research” (okay, I read some articles from my favorite Runner’s World magazine).

First, I read an article about Betsy Saina, an Olympic runner who runs a 14:39 5k. Girlfriend sleeps 9-10 hours per night, IN ADDITION to her 3 hours of daily naps to be fully rested for her workouts and races.

Other elites, like Deena Kastor and Shalane Flanagan, say that they sleep 10 hours per night. Elite marathon runner Ryan Hall schedules daily naps into his calendar as “business meetings.” Obviously, most of us (all of us) don’t have that kind of time on our hands, but wow, sleep must be pretty important for athletic performance. 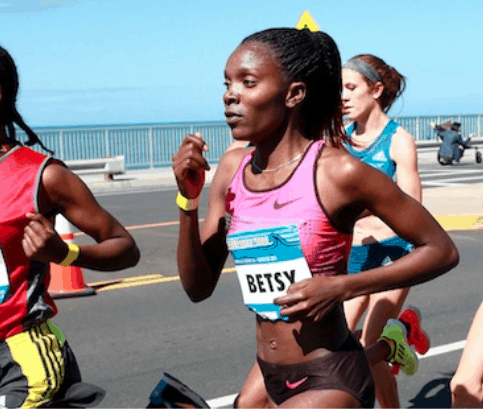 Okay, so sleep’s really important for career runners. What about the rest of us? Most of us aren’t trying to go to the Olympics; we’re just running for fun and maybe hoping to improve our personal times.

First of all, I found out that getting enough sleep is key for preventing workout injures. While we sleep, our bodies repair muscle, build bone, increase red blood cell production, and restock glycogen (our bodies’ fuel for running). 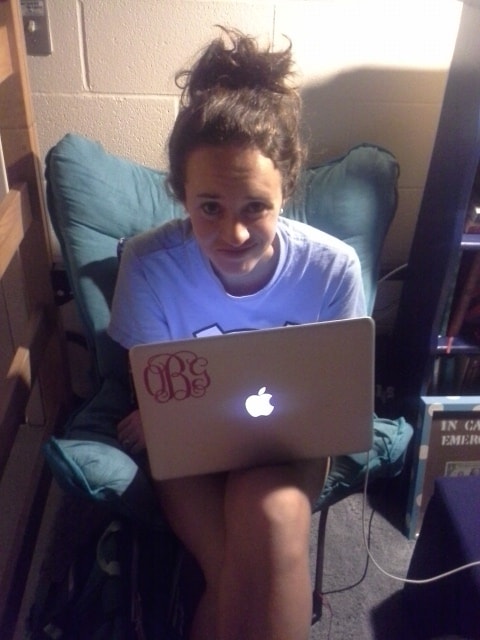 Exhibit A: my roommate snapped this picture while we were both working on papers at 1:30 a.m. a few weeks ago– lots of cortisol production (and roommate bonding!) going on here.

I think it’s almost seen as a sign of toughness if you can survive on as little sleep and as many 5 hour energy drinks as possible in college, but obviously that’s not healthy when we actually think about it…

Apparently, not getting enough sleep can also cause you to want to eat more. I read another Runner’s World article about a study where researchers measured appetite, levels of ghrelin (the hunger hormone), and ideal portion sizes in a test group of men. The men were first tested after sleeping for 8 hours during the night, and again tested after being sleep deprived.

I found this really interesting, and I could definitely see how it could be true. I know that when I’m low on energy, a lot of times it’s because I need food. So, when I’m tired, I often feel like I need to eat to regain energy– even when my tiredness is just from a lack of sleep, not from a lack of food.

Lots of other things are going on when we don’t get enough sleep, too, but those are some of the interesting things I found that I’d share.

So, how much sleep do we actually need?

I checked out several different articles and the consensus was that it depends on the person, their genetics, and how active they are. If you’re really active, you need more sleep! For me, that means that I can’t compare how much I sleep to people on my hall who don’t exercise much. A general rule of thumb seems to be 7-9 hours, but we each have to figure out what works for us.

I’m not willing to skip out on fun times with friends to get more sleep, but I’m going to work on time management and planning ahead to try to get myself in bed earlier as much as possible.

Questions for you: Do you have a goal for how many hours of sleep you want to get every night?

How long does it take you to fall asleep?

Any tips or tricks for getting enough sleep?